The Left Brain Vs the Right Brain - Research Paper Example

Comments (0)
Add to wishlist Delete from wishlist
Cite this document
Summary
The basic motive of this project named "The Left Brain Vs the Right Brain" shows the main differences between the right and left the brain. Moreover, author of this paper will analyze the significance of the roles that each part plays in the functioning and activities of an individual…
Download full paper File format: .doc, available for editing
HIDE THIS PAPERGRAB THE BEST PAPER92.3% of users find it useful 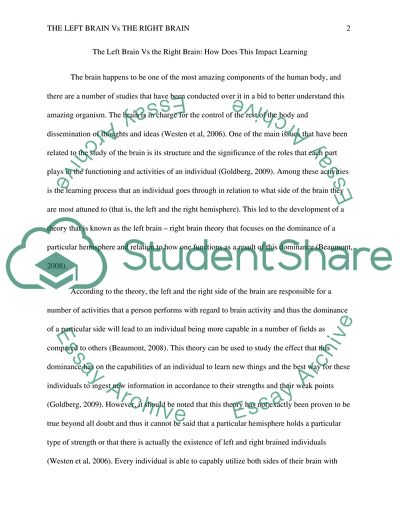 Extract of sample "The Left Brain Vs the Right Brain"

Download file to see previous pages This led to the development of a theory that is known as the left brain – right brain theory that focuses on the dominance of a particular hemisphere and relation to how one functions as a result of this dominance. According to the theory, the left and the right side of the brain are responsible for a number of activities that a person performs with regard to brain activity and thus the dominance of a particular side will lead to an individual being more capable in a number of fields as compared to others (Beaumont, 2008). This theory can be used to study the effect that this dominance has the capabilities of an individual to learn new things and the best way for these individuals to ingest new information in accordance to their strengths and their weak points. However, it should be noted that this theory has not exactly been proven to be true beyond all doubt and thus it cannot be said that a particular hemisphere holds a particular type of strength or that there is actually the existence of left and right brained individuals (Westen et al, 2006). Every individual is able to capably utilize both sides of their brain with exception to those suffering from medical problems and thus this theory can be said to remain a strong speculation at best. The left brain right brain theory suggests that each hemisphere utilizes a certain type of thinking. It is also advocated that most individuals prefer one type of thinking over the other and thus using this criterion one can either be considered a left brain or right brain thinker....
It is also advocates that most individuals prefer one type of thinking over the other and thus using this criteria one can either be considered a left brain or right brain thinker. The Left Side of the Brain The left side of the brain is said to perform a number of functions better than the right side and thus an individual who is referred to as a left brain thinker is said to be adept in issues that require analytical thinking, logic and language (Beaumont, 2008). This can involve functions such as critical thinking, problems that involve numbers and situations that may require reasoning. As a result, the left brain thinker can be seen as a logical individual. The Right Side of the Brian The right hemisphere of the brain on the other hand specializes in other issues such as expression and tasks that may require creative thinking (Goswami, 2006). This means that an individual who is a right brain thinker is adept at other tasks not related to the left side of the brain such as creativity, subjects such as music, color, intuition, expressing as well as reading emotions in others and images for example the recognition of faces(Goldberg, 2009). Using the criteria that have been established for both sides of the brain, one is able to establish the different types of thinking that are utilized by these two types of people (Goldberg, 2009). Whilst the left brained thinker will use logic and critical thinking processes to deal with problems in an analytical and what can be described as an established manner, the right brained thinker would prefer to take the route of creative thinking whereby they come up with what can be considered as unorthodox solutions to dealing with the same problems (Goldberg, 2009). It should also be noted that no one side of the brain, left ...Download file to see next pages Read More
Share:
Tags
Cite this document
(“The Left Brain Vs the Right Brain Research Paper”, n.d.)
Retrieved from https://studentshare.org/health-sciences-medicine/1472761-the-left-brain-vs-the-right-brain-how-does-this

(The Left Brain Vs the Right Brain Research Paper)
https://studentshare.org/health-sciences-medicine/1472761-the-left-brain-vs-the-right-brain-how-does-this.

“The Left Brain Vs the Right Brain Research Paper”, n.d. https://studentshare.org/health-sciences-medicine/1472761-the-left-brain-vs-the-right-brain-how-does-this.
Comments (0)
Click to create a comment or rate a document

CHECK THESE SAMPLES OF The Left Brain Vs the Right Brain

MRI’s and various cognitive function tests have shown that males and females use different parts of their brains while performing the exact same language tasks; the biological basis for this is due to the organizing effects of testosterone and estrogen. Females have long been known to be slightly ahead of males as far as language skills at younger ages, but this could also be attributed to the fact that overall females develop earlier than males and reach...
7 Pages (1750 words) Case Study

The main differences between the approaches made by American society and the Barbarian society were the purpose behind the invasions. The American society invaded Afghanistan after facing violent attacks from the Islamic anti-social groups. However, the Barbarian invasions in Rome signified the use of power by the leaders in order to capture territories and increase their kingdom. The main purpose behind the attacks made by the U.S. administration was to eliminate the terrorist groups from the world and make the world free f...
10 Pages (2500 words) Essay
sponsored ads
Save Your Time for More Important Things
Let us write or edit the research paper on your topic "The Left Brain Vs the Right Brain" with a personal 20% discount.
GRAB THE BEST PAPER

Let us find you another Research Paper on topic The Left Brain Vs the Right Brain for FREE!