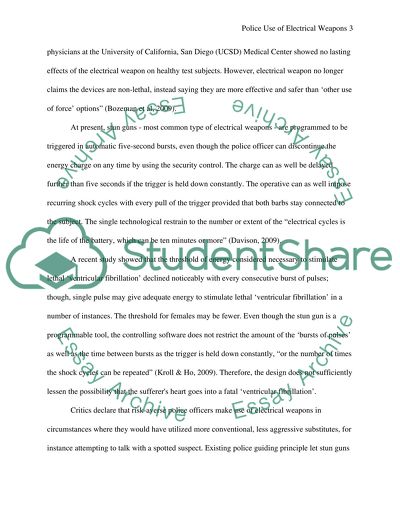 Extract of sample "Police Use of Electrical Weapons"

Download file to see previous pages Electrical weapons are most frequently utilized when fatal force is not suitable; fatal force is acceptable but smaller force may hold back the attacker; and fatal force is reasonable but its application could create security effects, for instance, damage to passersby or undesirable damage to property as well as atmosphere (MacDonald et al, 2009). Study into electrical technologies has an extended account in the Department of Justice. The Attorney General and the National Science Foundation organized the first forum on the issue during 1972. During 1986, Attorney General of that time convened a subsequent nationwide forum on electrical technologies in reaction to the United States Supreme Court judgment, which restricted the permitted application of lethal force against murderers. Due to the utilization of electricity along with the claim of the weapon being non-fatal, debate has started on particular occurrences concerning the weapon as well as the use of the weapon in general. Basically, debate has been focused on the rationalization of the application of the weapon in some particular occurrences, and, in a number of instances, health issues that are stated to be as a result of the use of the electrical weapon. “Tests conducted by the Cleveland Clinic found that electrical weapon did not interfere with pacemakers and implantable defibrillators. A study conducted by emergency medicine physicians at the University of California, San Diego (UCSD) Medical Center showed no lasting effects of the electrical weapon on healthy test subjects. However, electrical weapon no longer claims the devices are non-lethal, instead saying they are more effective and safer than ‘other use of force’ options” (Bozeman et al, 2009). At present, stun guns - most common type of electrical weapons - are programmed to be triggered in automatic five-second bursts, even though the police officer can discontinue the energy charge on any time by using the security control. The charge can as well be delayed further than five seconds if the trigger is held down constantly. The operative can as well impose recurring shock cycles with every pull of the trigger provided that both barbs stay connected to the subject. The single technological restrain to the number or extent of the “electrical cycles is the life of the battery, which can be ten minutes or more” (Davison, 2009). A recent study showed that the threshold of energy considered necessary to stimulate lethal ‘ventricular fibrillation’ declined noticeably with every consecutive burst of pulses; though, single pulse may give adequate energy to stimulate lethal ‘ventricular fibrillation’ in a number of instances. The threshold for females may be fewer. Even though the stun gun is a programmable tool, the controlling software does not restrict the amount of the ‘bursts of pulses’ as well as the time between bursts as the trigger is held down constantly, “or the number of times the shock cycles can be repeated” (Kroll & Ho, 2009). Therefore, the design does not sufficiently lessen the possibility that the sufferer's heart goes into a fatal ‘ventricular fibrillation’. Critics declare that risk-averse police officers make use of electrical weapons in circumstances where they would have utilized more conventional, less aggressive substitutes, for instance attempting to talk with a spotted suspect. Existing police guiding principle let stun guns to be utilized pre-emptively, “ ...Download file to see next pages Read More
Share:
Tags
Cite this document
(“Police Use of Electrical Weapons Term Paper Example | Topics and Well Written Essays - 1000 words”, n.d.)
Retrieved from https://studentshare.org/health-sciences-medicine/1424714-is-the-police-use-of-electrical-weapons-safe-how

CHECK THESE SAMPLES OF Police Use of Electrical Weapons

Is there verifiable evidence of nuclear bombs, the one that could be carried by missiles and be fired to as far as the United States, if indeed there is an admission or confession?
From the start, a state that would become a nuclear-armed state would begin with a nuclear-energy program. Then on and on, after acquiring the capability and material to produce energy, that state would proceed, secretly or clandestinely, to produce other materials to produce nuclear weapons. A question maybe asked here: is there a precise reason why states want to acquire nuclear weapons? Or is it the ambition of non-nuclear power states to acquire nuclear weapons or become nuclear-powered states?
Erich Marquardt (2003) in his Asia Time...
17 Pages (4250 words) Assignment

Global sourcing is a phenomenon that is on the rise with the passage of time. It is also known as ‘outsourcing’ as it looks to cover the weak areas of a...
10 Pages (2500 words) Term Paper

The three levels of law enforcement in the United States cover national, state and local security. This task of homeland security is the responsibility of the Federal Bureau of Investigation (FBI), the state police forces, and the local police force. Each of them has specific areas to cover...
8 Pages (2000 words) Case Study

Technology...
10 Pages (2500 words) Essay
sponsored ads
Save Your Time for More Important Things
Let us write or edit the term paper on your topic "Police Use of Electrical Weapons" with a personal 20% discount.
GRAB THE BEST PAPER

Let us find you another Term Paper on topic Police Use of Electrical Weapons for FREE!