Comments (0)
Add to wishlistDelete from wishlist
Cite this document
Summary
Literature Review Brief Overview of Studies on the Cardiac Nervous System The heart was initially thought as an insensate organ (Fu & Longhurst, 2009). Studies on the anatomy of human intrinsic cardiac nervous system have been conducted for almost 85 years…
Download full paperFile format: .doc, available for editing
HIDE THIS PAPERGRAB THE BEST PAPER91.4% of users find it useful 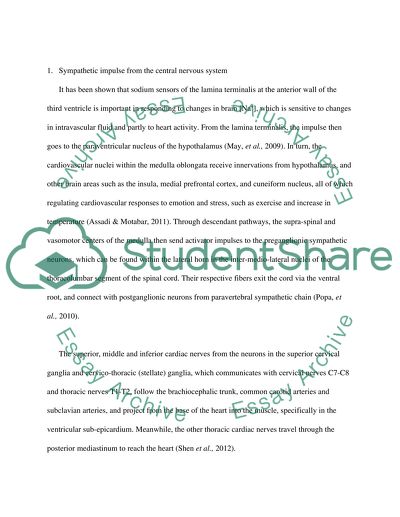 Download file to see previous pages As will be detailed below, histochemistry has played a major role in the study of cardiac nervous system. However, it is recognized that the only way to ascertain whether the inactivity or overdrive of a particular cardiac nerve plays a role in disease development and/or progression, for example blood pressure elevation, is through long-term prospective studies, which necessitates observation of hypertensive patients without any pharmacologic treatment (Grassi, 2010). Aside from the ethical issues of such studies, their feasibility demands extensive financial investment. Morphology of the cardiac nervous system As in any organ, the heart’s control comes from the central nervous system, the brain and the spinal cord. This part of the literature review looks at the cardiac innervation, starting from the central nervous system up to its final tributaries in the heart. 1. Sympathetic impulse from the central nervous system It has been shown that sodium sensors of the lamina terminalis at the anterior wall of the third ventricle is important in responding to changes in brain [Na+], which is sensitive to changes in intravascular fluid and partly to heart activity. From the lamina terminalis, the impulse then goes to the paraventricular nucleus of the hypothalamus (May, et al., 2009). In turn, the cardiovascular nuclei within the medulla oblongata receive innervations from hypothalamus, and other brain areas such as the insula, medial prefrontal cortex, and cuneiform nucleus, all of which regulating cardiovascular responses to emotion and stress, such as exercise and increase in temperature (Assadi & Motabar, 2011). Through descendant pathways, the supra-spinal and vasomotor centers of the medulla then send activator impulses to the preganglionic sympathetic neurons, which can be found within the lateral horn in the inter-medio-lateral nuclei of the thoracolumbar segment of the spinal cord. Their respective fibers exit the cord via the ventral root, and connect with postganglionic neurons from paravertebral sympathetic chain (Popa, et al., 2010). The superior, middle and inferior cardiac nerves from the neurons in the superior cervical ganglia and cervico-thoracic (stellate) ganglia, which communicates with cervical nerves C7-C8 and thoracic nerves T1-T2, follow the brachiocephalic trunk, common carotid arteries and subclavian arteries, and project from the base of the heart into the muscle, specifically in the ventricular sub-epicardium. Meanwhile, the other thoracic cardiac nerves travel through the posterior mediastinum to reach the heart (Shen et al., 2012). The cardiac superior nerves from the superior ganglion in front of C2 and C3 vertebrae go down toward the heart through the primitive carotid anterior to the large muscles of the neck. The small middle cervical ganglion, if present, is located at level of C6, near the thyroid artery. Its cardiac branch emerges after synapsing with the inferior cervical ganglion. On the right, it descends behind the primitive carotid to make up the dorsal part of the cardiac plexus, while receiving impulses from the principal pneumogastric and the recurrent nerves. On the other side, the nerves pass in between the left primitive carotid and the subclavian to converge at the deep part of the cardi ...Download file to see next pagesRead More
Share:
Tags
Cite this document
(“Brief overview on the studies on the cardiac nervous system Dissertation”, n.d.)
Brief overview on the studies on the cardiac nervous system Dissertation. Retrieved from https://studentshare.org/health-sciences-medicine/1400501-immunohistochemical-pattern-of-the-intrinsic
(Brief Overview on the Studies on the Cardiac Nervous System Dissertation)
Brief Overview on the Studies on the Cardiac Nervous System Dissertation. https://studentshare.org/health-sciences-medicine/1400501-immunohistochemical-pattern-of-the-intrinsic.
“Brief Overview on the Studies on the Cardiac Nervous System Dissertation”, n.d. https://studentshare.org/health-sciences-medicine/1400501-immunohistochemical-pattern-of-the-intrinsic.
Comments (0)
Click to create a comment or rate a document

In order to compare the welfare system of the three proposed countries, it is important to first develop a comparative method that would guide in comparing the three states. For the purpose of this paper, a binary comparison would be conducted. The implicit comparison would deal with Britain while the explicit comparison would explore the USA and Canada. Thereby a small N’ study would be used, that is, of three countries.
The three countries selected to share a similarity in the form that these countries are a welfare state. This is when welfare is mainly funded by the state. While the USA and Canada focus on the liberal welfare state, the welfare state of the UK is not quite defined.
The comparison of the welfare...
8 Pages(2000 words)Term Paper
sponsored ads
Save Your Time for More Important Things
Let us write or edit the dissertation on your topic "Brief overview on the studies on the cardiac nervous system" with a personal 20% discount.
GRAB THE BEST PAPER

Let us find you another Dissertation on topic Brief overview on the studies on the cardiac nervous system for FREE!