Comments (0)
Add to wishlistDelete from wishlist
Cite this document
Summary
The Ogallala Aquifer underlies the Panhandle and is the origin of irrigation water in the entire Texas Panhandle region, where agricultural production has been one of the major economic activities. However, as a result of continued pumping from the Aquifer, its water table has…
Download full paperFile format: .doc, available for editing
HIDE THIS PAPERGRAB THE BEST PAPER95% of users find it useful 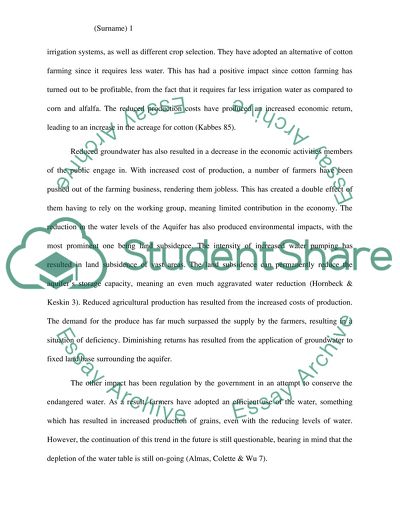 due: Ogallala Aquifer The Ogallala Aquifer underlies the Panhandle and is the origin of irrigation water in the entire Texas Panhandle region, where agricultural production has been one of the major economic activities. However, as a result of continued pumping from the Aquifer, its water table has declined at an alarming rate. In the 1960’s, wells could produce 1000 to 1200 gallons per minute but has since reduced to less than 200 gallons in the 1990’s. The decreasing amounts of the water level of the Ogallala Aquifer have impacted negatively on the communities depending on it. This has resulted to unfavorable economic realities which include reduced agricultural production, reduced revenue, lower tax revenues and also a reduction in the availability of community services (Kabbes 84).
Reduced agricultural production can be attributed to increased irrigation cost as a result of the decline in the water levels of the Aquifer. Pumping the reduced water level is capital-intensive bearing in mind that the farmers in the region depend on natural gas to pump water. This, therefore, has increased the cost of irrigation. The increased cost of irrigation as a result of the declining water level has resulted to small profit margins for the Texas Panhandle producers (Kabbes 84).
As a result of the decreased profits in agricultural production in the Texas Panhandle region, farmers have opted to practice non-irrigated farming, conservation tillage, precision irrigation systems, as well as different crop selection. They have adopted an alternative of cotton farming since it requires less water. This has had a positive impact since cotton farming has turned out to be profitable, from the fact that it requires far less irrigation water as compared to corn and alfalfa. The reduced production costs have produced an increased economic return, leading to an increase in the acreage for cotton (Kabbes 85).
Reduced groundwater has also resulted in a decrease in the economic activities members of the public engage in. With increased cost of production, a number of farmers have been pushed out of the farming business, rendering them jobless. This has created a double effect of them having to rely on the working group, meaning limited contribution in the economy. The reduction in the water levels of the Aquifer has also produced environmental impacts, with the most prominent one being land subsidence. The intensity of increased water pumping has resulted in land subsidence of vast areas. The land subsidence can permanently reduce the aquifer’s storage capacity, meaning an even much aggravated water reduction (Hornbeck & Keskin 3). Reduced agricultural production has resulted from the increased costs of production. The demand for the produce has far much surpassed the supply by the farmers, resulting in a situation of deficiency. Diminishing returns has resulted from the application of groundwater to fixed land base surrounding the aquifer.
The other impact has been regulation by the government in an attempt to conserve the endangered water. As a result, farmers have adopted an efficient use of the water, something which has resulted in increased production of grains, even with the reducing levels of water. However, the continuation of this trend in the future is still questionable, bearing in mind that the depletion of the water table is still on-going (Almas, Colette & Wu 7).
Works cited
Almas, Lal K., W. Arden Colette, and Zhen Wu. "Declining Ogallala Aquifer and Texas
Panhandle Economy." Selected paper prepared for Southern Agricultural Economics Association Annual Meeting, Tulsa, OK. 2004.
Hornbeck, Richard, and Pinar Keskin. The evolving impact of the Ogallala Aquifer: Agricultural
adaptation to groundwater and climate. No. w17625. National Bureau of Economic Research, 2011.
Kabbes, Karen C. Restoring Our Natural Habitat: Proceedings of the 2007 World
Environmental and Water Resources Congress, May 15-19, 2007, Tampa, Florida. Reston, VA: American Society of Civil Engineers, 2007. Print. Read More
Share:
Tags
Cite this document
(“Ogallala Aquifer Assignment Example | Topics and Well Written Essays - 500 words - 1”, n.d.)
Ogallala Aquifer Assignment Example | Topics and Well Written Essays - 500 words - 1. Retrieved from https://studentshare.org/geography/1666908-ogallala-aquifer

CHECK THESE SAMPLES OF Ogallala Aquifer

The Tragedy of the Commons

Methods of Conserving the Ogallala Aquifer

...in preventing the construction of a nuclear facility near the Aquifer system. Mr. Panhandle opposed the construction of the site, on the basis that it could lead to the destruction of the Ogallala Aquifer, through poisoning the water system. This event occurred during the periods of 1980s (Opie, 27). In 2008, the Trans Canada Corporation wanted to build a pipeline that will cross Athabasca oil sands to Houston, Texas (Guru et al, 31). This move created a lot of resistance from environmentalist, who argued that building an oil pipeline along the Aquifer system will make it vulnerable to pollution in case of an oil spill. However, a report by the United States department...
5 Pages(1250 words)Research Paper

... reduction or elimination of their water source altogether. In America there is an adequate amount of agricultural land to, for the most part, sustain our population. Gutentag’s observations indicate that the farmers of this agricultural land in turn rely heavily on whatever water resources they can exploit to bolster production. Irrigation is the major issue causing a depletion of the water table in this region, posing a major threat to the Ogallala aquifer (Gutentag). The recharge is considered a factor of interest in this paper. Cities located on the aquifer will also be considered as possible factors. This paper will examine the origin of the Ogallala aquifer, its depletion, consequences of this depletion and the possible measures...
4 Pages(1000 words)Essay

... Plains states such as North Dakota, South Dakota, Wyoming, Kansas, Nebraska Oklahoma and Texas. The aquifer is massive but relatively shallow. The importance of keeping this aquifer clean and safe from petrochemical pollution cannot be overstated. The primary use for the Ogallala Aquifer is irrigation of crops. The invention of center-pivot irrigation in the 1940’s and broad implementation of the technology in the 1950’s allowed farmers in the Great Plains to dependably raise crops such as corn, soybeans and peanuts that traditionally needed to be grown in more humid climates. This shift in land use forced out less water intensive forms of agriculture such as dry land ranching and created an agricultural economy heavily dependent...
12 Pages(3000 words)Research Paper

... to enjoy them. The Ogallala aquifer is one of the worlds largest and is located beneath the Great Plains area of the United States. It is fairly shallow but because of its surface area contains an enormous amount of water. This aquifer is vital for the future of the United States, and yet it is not doing very well. The water in it is running low. As one researcher recently framed the issue: Many people assume that large groundwater formations may temporarily run low, but will fill again when rainfall is plentiful – as do lakes, rivers, and reservoirs. However, unless the areas impacted are unaffected by the factors that contribute to high evaporation – such as minimal rainfall, abundant sunshine, low humidity, and periodic strong winds...
2 Pages(500 words)Essay

... of Texas Panhandle’s counties are dependent on the Ogallala Aquifer’s water sources for economic development. But, as the Ogallala’s water levels decline, agriculture in the region, as well as the rural communities, are forced to adjust to new economic realities presented by reduced agricultural productivity, availability of community services, revenue and lower tax revenues. The aquifer’s use started at the onset of the 20th century, with the dependence on it increasing steadily from World War II and surpassing its natural rate of recharge. The pumping of groundwater at a rate faster than it is recharged has had negative effects on the people who use it as well the environment. Most significantly, the water table is lowered; costs...
2 Pages(500 words)Admission/Application Essay

...liance by these people suggests that the depletion of water will result in the loss of a source of livelihood for these people. In addition, these people produce food that sustains the country (Clark, 2009). Therefore, the depleting water levels not only have the potential; to deny people of their source of livelihood, but also may have negative effects on the food situation in the country (Clark, 2009). Over the last few decades, increasing populations coupled with improving technology have seen the rate of exploitation of water from the Ogallala aquifer exceed the recharge rates. The excessive discharge suggests that there is a deficiency in the water balance that has resulted in lowering water levels. For example, the aquifer is...
2 Pages(500 words)Admission/Application Essay

...for the source of groundwater irrigation in America and fueling the crops for their growth. There are many sort of croplands that take a big advantage of the water from the Aquifer which include wheat, corn, cotton and soybean crops. This production of grains and other agricultural products have made it possible for America to emerge as an agricultural state also and fulfill the state needs of grain quantities such as that in Nebraska and Kansas. (Guru, Horne and Kerr Centre 1). This establishes the importance of the Ogallala Aquifer and the water reserve in the irrigation process and its agricultural value in the state economy. Recently, there has been seen a dramatic decline in the...
2 Pages(500 words)Assignment

...of the world are working towards effective water resources management systems. Many countries, through the Global Water Partnership (GWP) and other initiatives like the European Water Framework Directive (WFD), are implementing systems which are anchored on the Dublin principles (Evett, et al., 2009). A major source of fresh water in the US is the Ogallala aquifer. It covers the High Plains aquifer in the Midwestern area of United States.  It is situated in the saturated part of the formation, thus remains one of the indispensible water source for agriculture in America. The aquifer is believed to occupy a total of 174,000 square miles across eight...
14 Pages(3500 words)Research Paper
sponsored ads
Save Your Time for More Important Things
Let us write or edit the assignment on your topic "Ogallala Aquifer" with a personal 20% discount.
GRAB THE BEST PAPER

Let us find you another Assignment on topic Ogallala Aquifer for FREE!