Comments (0)
Add to wishlistDelete from wishlist
Cite this document
Summary
For example, the Spanish was more influential in the islands. On the other hand, France and England were influential in New France and metropolitan respectively.
The Spanish was the first to use the name America after discovery of…
Download full paperFile format: .doc, available for editing
HIDE THIS PAPERGRAB THE BEST PAPER91% of users find it useful 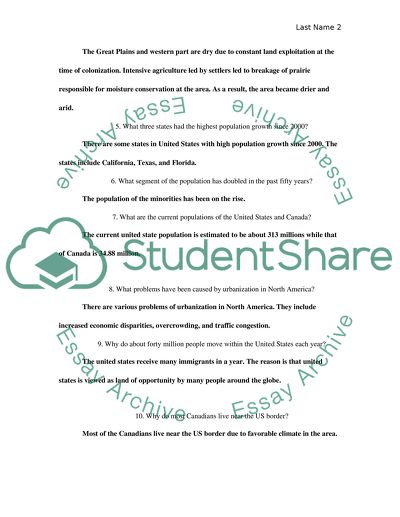 Geo101 Who were the three main European colonizers of what became the United s and Canada? In the past, both United States and Canada were grouped together. As a result, they were colonized together at the time. The three main colonizers were Spain, England, and France.
2. Where was each European colonizer most influential?
Each colony had its influence in the region. For example, the Spanish was more influential in the islands. On the other hand, France and England were influential in New France and metropolitan respectively.
3. Describe long-term impacts of each European power in North America?
The Spanish was the first to use the name America after discovery of new lands. Most of the Spanish colonies retain Spanish as their official language. Additionally, the colony led to the introduction of Christianity. The colony also led to the establishment of old colonial city such as St. Augustine. On the other hand, France introduced fur trade in the northern part of Canada. The French has a lasting impact on language as most of it is used in Canada today. Additionally, England led to naming of colonies that still exist today such as Virginia and Maryland. In addition, it led to the introduction of protestant.
4. What is a main reason the Great Plains and the western part of the United States are so
arid?
The Great Plains and western part are dry due to constant land exploitation at the time of colonization. Intensive agriculture led by settlers led to breakage of prairie responsible for moisture conservation at the area. As a result, the area became drier and arid.
5. What three states had the highest population growth since 2000?
There are some states in United States with high population growth since 2000. The states include California, Texas, and Florida.
6. What segment of the population has doubled in the past fifty years?
The population of the minorities has been on the rise.
7. What are the current populations of the United States and Canada?
The current united state population is estimated to be about 313 millions while that of Canada is 34.88 million.
8. What problems have been caused by urbanization in North America?
There are various problems of urbanization in North America. They include increased economic disparities, overcrowding, and traffic congestion.
9. Why do about forty million people move within the United States each year?
The united states receive many immigrants in a year. The reason is that united states is viewed as land of opportunity by many people around the globe.

10. Why do most Canadians live near the US border?
Most of the Canadians live near the US border due to favorable climate in the area.
11. Why has the United States been called a melting pot? What are the largest minority groups in the country?
The acronym melting point is the ability of the country to accommodate different people from various countries. The Hispanics are the largest minority group in the country.
12. What parts of the United States have the highest representation of the four largest minority groups?
There are areas preferred by four largest minority groups. They include Hawaii, Honolulu, and Dakota.
13. How did the US Hispanic population change in size and location from 2000 to 2010? Why is the Hispanic population growing faster than other ethnic groups in the United States?
The population increased by 15.2 million over the decade. Moreover, the population has increased in size in the southern states. The population increased due to the high rate of migration.
14. What two states have about 50 percent of the Hispanic population?
The states with over 50 percent are California and Texas.
15. What have been the push-pull factors for Hispanic immigration to the United States?
There are factors contributing to Hispanic immigration to United States. The factors include poverty, unemployment and deplorable social conditions in their country as well as promise for prosperity, wealth and happiness.
16. What is a remittance, and how are remittances significant for immigrants to the United States?
The remittance is the transfer of money by a foreign worker to an individual in his/her home country. The remittance helps the immigrants to boost the economic status of their country as well as help their kin.
17. Describe the spatial pattern of the African American population. Why do so many blacks live in the Southeast?
Most of the African American population is found in the Southeast. The reason for the pattern is due to the high rate of slavery and slave plantations in the area.
18. What was the Great Migration, and what were some of its long-term impacts on the United States?
The Great Migration was the movement of African American from the south to go and work in the industrialized north. The impact on United States was distribution of blacks to various parts of the north as it is today.
19. List three of the main Protestant religious denominations in the United States, describe their spatial patterns, and explain what caused these patterns.
The main protestant religions denominations include Baptist church, northern Appalachia and the lower Midwest, and the Roman Catholic Church. Baptist church is widespread in the south due to its popularity among African American that lived there. The northern Appalachia and the lower Midwest are located in areas significantly influenced by awakening and revival. the roman catholic church dominates the southeast, southwest and western due to heavy presence of Hispanics that are staunch follower of the religion.
20. Name the states or provinces that have high percentages of Catholics
The states with a high percentage of Catholics are Florida, California, and Texas. Read More
Share:
Tags
Cite this document
(“Questions Assignment Example | Topics and Well Written Essays - 500 words - 8”, n.d.)
Retrieved from https://studentshare.org/geography/1630483-questions

...Questions Questions Question Catholic churches are masculine because of their doctrine of God latria, which is simply worshippingjust God. A common misconception is that Catholic churches worship Mary who they rather accord her to the utmost honor as a mere creation of God. Honoring Mary is a deed of affection that always converts to God’s glory, which further shows the masculine nature of Catholic doctrine. On the other hand, Protestant churches are feminine as leaders proclaim women as overseers of key ceremonies. Seminaries of protestant churches comprise of 50% women and the ordained priests largely consist of clergy from female dominated professions like...
1 Pages(250 words)Essay
sponsored ads
Save Your Time for More Important Things
Let us write or edit the assignment on your topic "Questions" with a personal 20% discount.
GRAB THE BEST PAPER

Let us find you another Assignment on topic Questions for FREE!