Comments (0)
Add to wishlistDelete from wishlist
Cite this document
Summary
Wisconsin and Iowa are to the Eastern border while it shares Lake Superior with Michigan and Wisconsin to the North East.
The state is rich in features and…
Download full paperFile format: .doc, available for editing
HIDE THIS PAPERGRAB THE BEST PAPER95.7% of users find it useful 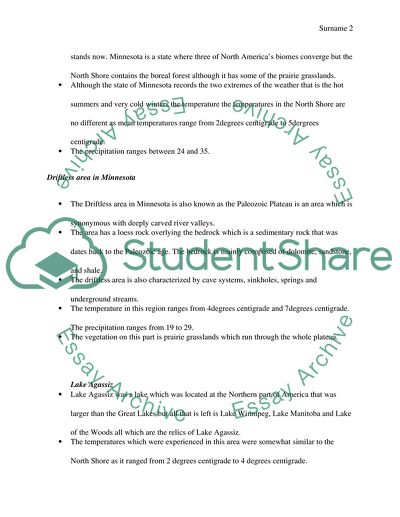 Extract of sample "Geography of minnesota"

Sur Due Geography of Minnesota Minnesota is a US in the region commonly referred to as the Upper Midwestand it is the northernmost state outside Alaska.
The state has North Dakota and South Dakota to the West and the Canadian provinces of Ontario and Manitoba to the North. Wisconsin and Iowa are to the Eastern border while it shares Lake Superior with Michigan and Wisconsin to the North East.
The state is rich in features and marvelous sites and terrain which contain some of the oldest rocks. This paper looks at some five sites namely: North shore of Lake Superior, Driftless Area, Glacier Lake Agassiz, Minnesota Rover Valley, Pitted Outwash Plain of the Brainerd Area.
The North Shore
The North Shore as referred by the Americans is the shoreline of Minnesota between the city of Duluth and the international border at Grand Portage.
The North Shore is mainly characterized by alternating rocky cliffs and Precambrian formed rocks which are found at the shores of Lake Superior. Due to glaciation much of the sandstone was eroded leaving eroded igneous material on the surface.
The North Shore rises has an elevation of about six hundred feet and is said to have been as low as 250 feet from its current position and as high as five hundred feet from where it stands now. Minnesota is a state where three of North America’s biomes converge but the North Shore contains the boreal forest although it has some of the prairie grasslands.
Although the state of Minnesota records the two extremes of the weather that is the hot summers and very cold winters the temperature the temperatures in the North Shore are no different as mean temperatures range from 2degrees centigrade to 5dergrees centigrade.
The precipitation ranges between 24 and 35.
Driftless area in Minnesota
The Driftless area in Minnesota is also known as the Paleozoic Plateau is an area which is synonymous with deeply carved river valleys.
The area has a loess rock overlying the bedrock which is a sedimentary rock that was dates back to the Paleozoic age. The bedrock is mainly composed of dolomite, sandstone, and shale.
The driftless area is also characterized by cave systems, sinkholes, springs and underground streams.
The temperature in this region ranges from 4degrees centigrade and 7degrees centigrade. The precipitation ranges from 19 to 29.
The vegetation on this part is prairie grasslands which run through the whole plateau.
Lake Agassiz
Lake Agassiz was a lake which was located at the Northern part of America that was larger than the Great Lakes but all that is left is Lake Winnipeg, Lake Manitoba and Lake of the Woods all which are the relics of Lake Agassiz.
The temperatures which were experienced in this area were somewhat similar to the North Shore as it ranged from 2 degrees centigrade to 4 degrees centigrade.
The vegetative cover consisted of the Boreal forest and the precipitation ranged between 30 to 35 inches.
The pitted outwash plain
The pitted outwash plain is located on the Northeast of Minnesota is around 1300 feet and has a vegetative cover which mainly consists of boreal forest and some parts contain the prairies grasslands.
The temperature ranges between 4 degrees centigrade and 7 degrees centigrade while the precipitation ranges between 24 and 32 inches.
The Minnesota River Valley
The Minnesota River valley is 8 kilometers wide and 80 meters deep and was carved by glaciation activity in the region.
The region is characterized by the big deciduous forest.
The temperature ranges from 5 degrees centigrade to around 8 degrees centigrade.
Precipitation on the other hand ranges from 23 inches to 30 inches.
Works Cited
Hart, John Fraser, and Susy S. Ziegler. Landscapes of Minnesota: a geography. St. Paul: Minnesota Historical Society Press, 2008. Print. Read More
Share:
Tags
Cite this document
(“Geography of minnesota Assignment Example | Topics and Well Written Essays - 500 words”, n.d.)
Geography of minnesota Assignment Example | Topics and Well Written Essays - 500 words. Retrieved from https://studentshare.org/geography/1627595-geography-of-minnesota

CHECK THESE SAMPLES OF Geography of minnesota

... Minnesota Rag: Corruption, Yellow Journalism, and the Case that Saved Freedom of the Press In Minnesota Rag Fred W. Friendly writes an interesting historical narrative on a seminal First Amendment case. Friendly, a long respected and thought provoking journalist brings to this book a rich intellectual involvement in the First Amendment coupled with a reporter's enthusiasm. This double perspective invigorates the entire book. It was at Duluth in 1917, from where Friendly's story started. It was an iron rich town where corrupt elements developed two and a half years earlier than the eighteenth amendment under a local prohibition law. Johan Morrison began to publish the Rip-Saw, this was published weekly which exposed the illegal uses...
4 Pages(1000 words)Essay

... Geography: Annotated Bibliography Winter, Christine. “Geography and education II: Policy reform, Humanities and the future of school Geography in England.” Progress in Human Geography 36.2 (2012): 254-262. Winter in this research work gives a reflection on the strong link between geography and education. The author points out that the subject of geography is of great significance in English universities today whereas the contemporary popularity of this subject is declining in schools. In this scholarly work, the writer describes the latest developments in the English school syllabus for kids aged between 11years to 14years. Winter outlines the various strategies adopted by university geographers while undertaking research and training...
7 Pages(1750 words)Annotated Bibliography

... Geography I believe that the vocation of an individual from early days makes way for the development of practical training that may be required in the future. I am currently enrolled for majors in the field of geography and this relates to my particular interest in the geographical diversity that is found all over the world. I believe that after I complete my majors from school, I would pursue a career in the field of geography only. The field that I believe particularly suits me is to be a geographical analyst who knows as to how things are working in accordance to geography. Early days lay down a foundation for a future and I think I have laid down a foundation to pursue a career in the field of geography. A geographical analyst can...
2 Pages(500 words)Essay
sponsored ads
Save Your Time for More Important Things
Let us write or edit the assignment on your topic "Geography of minnesota" with a personal 20% discount.
GRAB THE BEST PAPER

Let us find you another Assignment on topic Geography of minnesota for FREE!