Comments (0)
Add to wishlistDelete from wishlist
Cite this document
Summary
Also both this states are rich in agricultural sector. Both the states are almost equally densely populated. These countries share borders with each other as…
Download full paperFile format: .doc, available for editing
HIDE THIS PAPERGRAB THE BEST PAPER94.5% of users find it useful 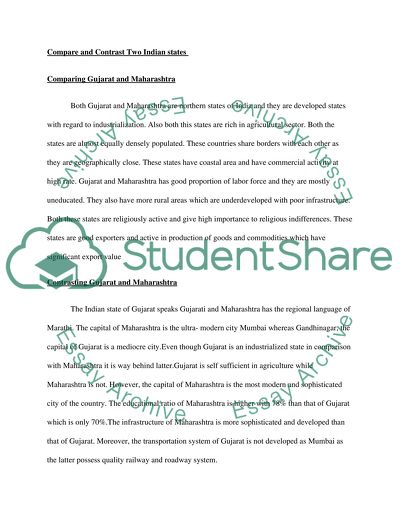 Compare and Contrast Two Indian s Comparing Gujarat and Maharashtra Both Gujarat and Maharashtra are northern s of India and they are developed states with regard to industrialization. Also both this states are rich in agricultural sector. Both the states are almost equally densely populated. These countries share borders with each other as they are geographically close. These states have coastal area and have commercial activity at high rate. Gujarat and Maharashtra has good proportion of labor force and they are mostly uneducated. They also have more rural areas which are underdeveloped with poor infrastructure. Both these states are religiously active and give high importance to religious indifferences. These states are good exporters and active in production of goods and commodities which have significant export value
Contrasting Gujarat and Maharashtra
The Indian state of Gujarat speaks Gujarati and Maharashtra has the regional language of Marathi. The capital of Maharashtra is the ultra- modern city Mumbai whereas Gandhinagar, the capital of Gujarat is a mediocre city.Even though Gujarat is an industrialized state in comparison with Maharashtra it is way behind latter.Gujarat is self sufficient in agriculture while Maharashtra is not. However, the capital of Maharashtra is the most modern and sophisticated city of the country. The educational ratio of Maharashtra is higher with 78% than that of Gujarat which is only 70%.The infrastructure of Maharashtra is more sophisticated and developed than that of Gujarat. Moreover, the transportation system of Gujarat is not developed as Mumbai as the latter possess quality railway and roadway system. Read More
Share:
Tags
Cite this document
(“Compare and contrast two Indian states Essay Example | Topics and Well Written Essays - 250 words”, n.d.)
Retrieved from https://studentshare.org/geography/1622684-compare-and-contrast-two-indian-states

CHECK THESE SAMPLES OF Compare and contrast two Indian states

The car manufacturing industry is one of the leading industries in the world due to its overall size and its impact on the economy of any nation. However, in the current economic situation, the overall state of the automobile industry may not be encouraging at all as the economic slow down is causing a sharp decline in the aggregate demand for the cars. The demand for usual small as well as luxury cars is decreasing and so is the profitability of the automobile manufacturing firms thus making it significantly more challenging for the firms to sustain such a hostile economic environment. (Henning, 2008). Not only the automobile firms from Asia and Europe are affected by the crisis but firms like Ford and GM are probably the worst-h...
10 Pages(2500 words)Case Study

One of the major policies undertaken by the British Government in the last two years was fiscal decentralization. The government has taken steps to ensure that improvement is made in the country’s...
7 Pages(1750 words)Coursework
sponsored ads
Save Your Time for More Important Things
Let us write or edit the essay on your topic "Compare and contrast two Indian states" with a personal 20% discount.
GRAB THE BEST PAPER

Let us find you another Essay on topic Compare and contrast two Indian states for FREE!