Comments (0)
Add to wishlistDelete from wishlist
Cite this document
Summary
Space of nonexistence and the idea of borderlands is a concept that Susan Bibler-Coutin discusses in her chapter, “Illegality, Borderlands, and the Space of Nonexistence”. As such, the author seeks to analyze, weigh, and compare theses unique concepts. Furthermore, the…
Download full paperFile format: .doc, available for editing
HIDE THIS PAPERGRAB THE BEST PAPER95.3% of users find it useful 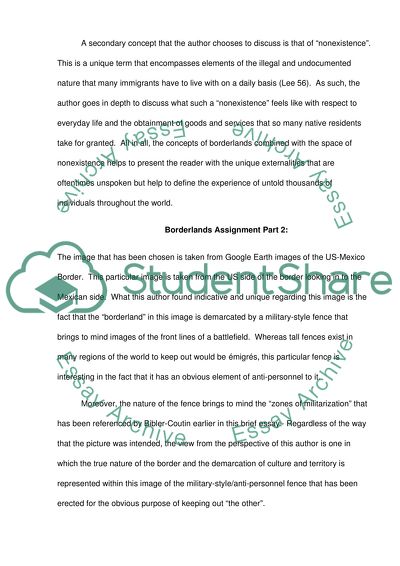 Extract of sample "The Social Life of Borders"

Section/# Borderlands Assignment Part Space of nonexistence and the idea of borderlands is a concept that Susan Bibler-Coutin discusses in her chapter, “Illegality, Borderlands, and the Space of Nonexistence”. As such, the author seeks to analyze, weigh, and compare theses unique concepts. Furthermore, the author seeks to juxtapose the fact that although they exist concurrently they are also separate. As such, this brief reflection paper will consider the nature of both of these terms as described by the author and work to analyze how they exist within the United States/Mexican cultural exchange.
Miller says concerning borderlands, “Borderlands are spaces that defy categories and paradigms, that “don’t fit,” and that therefore reveal the criteria that determine fittedness spaces whose very existence is simultaneously denied and demanded by the socially powerful. Borderlands are targets of repression and zones of militarization, as can be seen by the recent deployment of weaponry and guardsmen along the U.S.-Mexico border. Borderlands are marginalized yet strategic…” (Bibler-Coutin 171). As such, it is not difficult for the reader to understand the unique nature of the borderlands as something that neither typifies the culture and identity of either region that adjoins such an area.
A secondary concept that the author chooses to discuss is that of “nonexistence”. This is a unique term that encompasses elements of the illegal and undocumented nature that many immigrants have to live with on a daily basis (Lee 56). As such, the author goes in depth to discuss what such a “nonexistence” feels like with respect to everyday life and the obtainment of goods and services that so many native residents take for granted. All in all, the concepts of borderlands combined with the space of nonexistence helps to present the reader with the unique externalities that are oftentimes unspoken but help to define the experience of untold thousands of individuals throughout the world.
Borderlands Assignment Part 2:
The image that has been chosen is taken from Google Earth images of the US-Mexico Border. This particular image is taken from the US side of the border looking in to the Mexican side. What this author found indicative and unique regarding this image is the fact that the “borderland” in this image is demarcated by a military-style fence that brings to mind images of the front lines of a battlefield. Whereas tall fences exist in many regions of the world to keep out would be émigrés, this particular fence is interesting in the fact that it has an obvious element of anti-personnel to it.
Moreover, the nature of the fence brings to mind the “zones of militarization” that has been referenced by Bibler-Coutin earlier in this brief essay. Regardless of the way that the picture was intended, the view from the perspective of this author is one in which the true nature of the border and the demarcation of culture and territory is represented within this image of the military-style/anti-personnel fence that has been erected for the obvious purpose of keeping out “the other”.
Works Cited
Bibler-Coutin. “Illegality, Borderlands, and the Space of Nonexistence.” Journal of American History 86.2 (2000): 171-196. Academic Search Complete. Web. 8 Nov. 2012.
Lee, Erika. "Enforcing The Borders: Chinese Exclusion Along The U.S. Borders With Canada And Mexico, 1882-1924." Journal Of American History 89.1 (2002): 54-86. Academic Search Complete. Web. 8 Nov. 2012. Read More
Share:
Tags
Cite this document
(“The Social Life of Borders Essay Example | Topics and Well Written Essays - 500 words”, n.d.)
The Social Life of Borders Essay Example | Topics and Well Written Essays - 500 words. Retrieved from https://studentshare.org/geography/1607869-the-social-life-of-borders

CHECK THESE SAMPLES OF The Social Life of Borders

He was born and raised by Marrow Coffey and William Franklin Graham in Charlotte, North Carolina on November 7, 1918, and dreamt of becoming a baseball player. He has a sister named Katherine, both of which were raised in the Associate Reformed Presbyterian Church. In 1933, at the end of the Prohibition in the United States, their father forced them to drink until they vomit, leading to Graham’s aversion towards alcohol and drugs. He graduated from...

Many felt that Dr. King was an “outsider” meddling in matters that did not concern him. Dr. King's accusers said that he was creating tension in society, going against the laws of the land, and not concerned with the matters of the church. Similarly, Socrates's accusers stated that he was promoting general corruption, corrupting amongst the youth, and his motives regarding following the law of the land are...

ng the developments and innovation in different ICT fields like computers and the internet, telecommunications and mobile telephone, mass media, traveling facilities and many more.
ICT has very strong and direct impacts on human development and society. It not only serves the society as a whole but also tends to improve and develop the individual position of the people. There are several aspects of human and social lives that are facing the ICT effects. ICT developments are reshaping the cultural values of societies. ICT does a lot of beneficial functions for the mental growth of humans. It facilitates the people to communicate in better ways, develop good understandings about different things and have deep knowledge and inst...
6 Pages(1500 words)Essay
sponsored ads
Save Your Time for More Important Things
Let us write or edit the essay on your topic "The Social Life of Borders" with a personal 20% discount.
GRAB THE BEST PAPER

Let us find you another Essay on topic The Social Life of Borders for FREE!