Comments (0)
Add to wishlistDelete from wishlist
Cite this document
Summary
From the paper "A Preliminary Investigation into Township Planning in and around Chennai City Limits" it is clear that it will be necessary to source positive feedback relating to the success of the townships and their effectiveness across wide markets within the communities that reside in Chennai…
Download full paperFile format: .doc, available for editing
HIDE THIS PAPERGRAB THE BEST PAPER91.6% of users find it useful 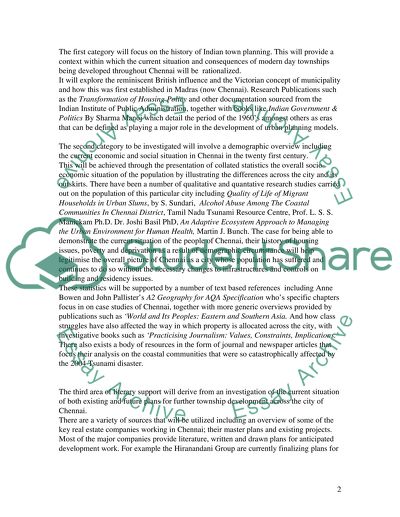 Download file to see previous pages Despite its ongoing development as a leading commercial metropolis, Chennai is also responsible for housing 5% of the entire slum population of India, together with a significantly high migrant population. This proposal will outline a framework for consideration based on the principle that as a city Chennai needs to incorporate a great many factors into its attempts to expand and develop industrially, educationally and for the benefit of its existing residents and future population. In particular, it will seek to demonstrate the advantages of recent city growth in the form of townships. How the city is developing and reinventing itself as a consequence of these new developments
The literature for this research will broadly split into three categories. Each category will be the focus of the three fundamental chapters. With the fourth and final chapter dedicated to rationalizing the findings. The first category will focus on the history of Indian town planning. This will provide a context within which the current situation and consequences of modern-day townships being developed throughout Chennai will be rationalized. It will explore the reminiscent British influence and the Victorian concept of the municipality and how this was first established in Madras (now Chennai). Research Publications such as the Transformation of Housing Policy and other documentation sourced from the Indian Institute of Public Administration, together with books like Indian Government & PoliticsBy Sharma Manoj which detail the period of the 1960s amongst others as eras that can be defined as playing a major role in the development of urban planning models. The second category to be investigated will involve a demographic overview including the current economic and social situation in Chennai in the twenty-first century. This will be achieved through the presentation of collated statistics the overall socio-economic situation of the population by illustrating the differences across the city and its outskirts.  ...Download file to see next pagesRead More
Share:
Cite this document
(A Preliminary Investigation into Township Planning in and around Research Proposal, n.d.)
A Preliminary Investigation into Township Planning in and around Research Proposal. Retrieved from https://studentshare.org/geography/1523849-township-planning-in-and-around-chennai-city-limits

Project planning involves a lot of factors and areas that we need to address for the effective management and handling of the project. The aim of this report is to provide a deep insight into some of the main areas that we need to address for the project of Adams's family farmhouse renovation. These issues are project team communication, project risk management, and deadline handling. Effective communication in a project provides a huge advantage regarding the better working and handling of the project. I have selected a very significant project regarding the preservation of the old and historical places. Here we require effective communication to provide better interaction among the designer, developers, and history preservation...
8 Pages(2000 words)Coursework
sponsored ads
Save Your Time for More Important Things
Let us write or edit the research proposal on your topic "A Preliminary Investigation into Township Planning in and around Chennai City Limits" with a personal 20% discount.
GRAB THE BEST PAPER

Let us find you another Research Proposal on topic A Preliminary Investigation into Township Planning in and around Chennai City Limits for FREE!