Comments (0)
Add to wishlistDelete from wishlist
Cite this document
Summary
Transportation and Mobility under Urbanization Process Institution: Name: Date: Introduction Transportation and mobility has developed due to urbanization. In Toronto area, the population has attributed it to urbanization that took effect after World War II…
Download full paperFile format: .doc, available for editing
HIDE THIS PAPERGRAB THE BEST PAPER93.5% of users find it useful 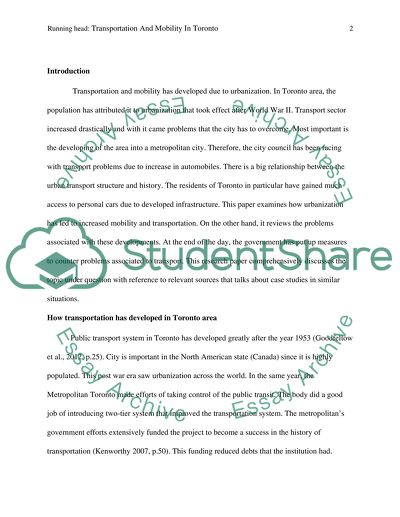 Extract of sample "Issues of Transportation and Mobility Under Urbanization Process"

Download file to see previous pages There is a big relationship between the urban transport structure and history. The residents of Toronto in particular have gained much access to personal cars due to developed infrastructure. This paper examines how urbanization has led to increased mobility and transportation. On the other hand, it reviews the problems associated with these developments. At the end of the day, the government has put up measures to counter problems associated to transport. This research paper comprehensively discusses the topic under question with reference to relevant sources that talks about case studies in similar situations. How transportation has developed in Toronto area Public transport system in Toronto has developed greatly after the year 1953 (Goodfellow et al., 2012, p.25). City is important in the North American state (Canada) since it is highly populated. This post war era saw urbanization across the world. In the same year, the Metropolitan Toronto made efforts of taking control of the public transit. The body did a good job of introducing two-tier system that improved the transportation system. The metropolitan’s government efforts extensively funded the project to become a success in the history of transportation (Kenworthy 2007, p.50). This funding reduced debts that the institution had. Despite digging deeper for the project, the institution realized great development that eased public transportation. This move would later form back born of transportation of the area. However, this development invited problems for the transportation and mobility. Car ownership increased which meant traffic snarl-ups. The number of households owing cars increased and the metropolitan government had to deal with problems like effects of automobiles on the environment, pedestrians. Since the Second World War, more vehicles have increased into the road (Renne & Fields 2013b, p.580). On the other hand, the public had to deal with long distances since the government had not provided incentives for constructing bypasses. Private car ownership increased. Traffic officials do have difficult time controlling private motorists. They always break the rules since and crackdown on them has proved hectic for the traffic police. In the post war era, mobility also proved difficult for the pedestrians. This mad the government to go back to the drawing table to salvage the situation. Pedestrians have equal rights to use the road. Motorists at this time were not considerate of this group of people and it resulted into numerous accidents (Kenworthy 2007, p.50). This resulted to traffic congestions, overcrowding at the public transport. In several occasions, the pedestrians were stranded in the city. Increase in car numbers also brought about parking problems in towns. There were many cars with limited parking space. The vehicles also affect environment. Comparable case studies Many case studies exist on transportation, which are comparable to the situations in Toronto (Renne & Fields 2013b, p.580). This book talks about case studies in major cities of the world that are metropolitan in nature. Cities like Tokyo, Moscow, Osaka Japan and New York have the same transportation features as Toronto. There is a case study on the transit system of Toronto. The system paves way for trolley buses and trams in the stations. It has really helped in improving mobility of city travelers. These modes of transportation and mobility are mostly popular in New York, a city that once faced mobility problems. Toronto Transit Commission ...Download file to see next pagesRead More
Share:
Cite this document
(“Issues of Transportation and Mobility Under Urbanization Process Research Paper”, n.d.)
Issues of Transportation and Mobility Under Urbanization Process Research Paper. Retrieved from https://studentshare.org/geography/1483098-issues-of-transportation-and-mobility-under
(Issues of Transportation and Mobility Under Urbanization Process Research Paper)
Issues of Transportation and Mobility Under Urbanization Process Research Paper. https://studentshare.org/geography/1483098-issues-of-transportation-and-mobility-under.
“Issues of Transportation and Mobility Under Urbanization Process Research Paper”, n.d. https://studentshare.org/geography/1483098-issues-of-transportation-and-mobility-under.
Comments (0)
Click to create a comment or rate a document

...Profile Report This report compares and contrasts the answers provided by the interviewees X and Jason. Learning and memory process Interviewee X prefers to learn by observation and has the ability to give directions to a place that X has earlier visited. Jason also prefers to learn by observation. Interviewee X prefers to work in silence to avoid distraction whereas Jason prefers distractions as they force him to concentrate. Quietude makes his mind wander. Interviewee X’s preference to work in silence points to the use of committing work to the long term memory. Jason displays a preference to utilize short term memory for his work since it has the capacity to focus on the work at hand despite distractions around. The use of short term...
6 Pages(1500 words)Assignment
sponsored ads
Save Your Time for More Important Things
Let us write or edit the research paper on your topic "Issues of Transportation and Mobility Under Urbanization Process" with a personal 20% discount.
GRAB THE BEST PAPER

Let us find you another Research Paper on topic Issues of Transportation and Mobility Under Urbanization Process for FREE!