Comments (0)
Add to wishlistDelete from wishlist
Cite this document
Summary
TO: Mr. Jones, Prospective buyer for Smithon Manufacturing FROM: DATE: February 8, 2011 SUBJECT: Smithon Widgets (a C corporation) A review of Smithon Widgets (a C corporation) addressing the purchase of Smithon stock, as well as the potential for conversion of Smithon Corporation from a C Corporation to an S corporation…
Download full paperFile format: .doc, available for editing
HIDE THIS PAPERGRAB THE BEST PAPER95.9% of users find it useful 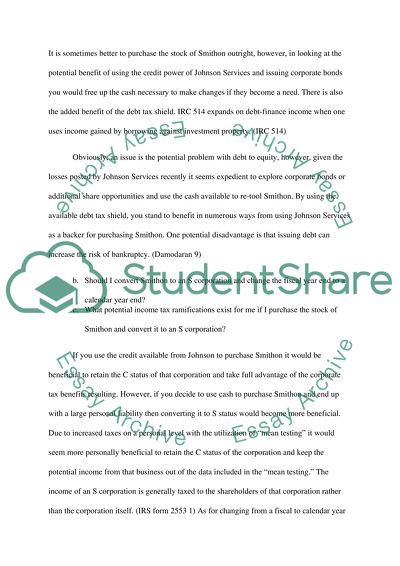 Download file to see previous pages Jones to change Smithon from a fiscal year end to calendar year end and convert it to an S corporation. You asked that I give you definitive answers regarding the outright purchase of Smithon stock, as well as the potential merger or acquisition of Smithon by Johnson Services. Of these two main issues there are several minor points that need addressed? I will break each section down and answer those questions specifically, definitively responding for each. To be addressed first is, 1. the outright purchase of Smithon stock a. Should you purchase the stock of Smith outright, leaving Smithon intact? What about issuing debt in your Johnson Services company to pay for the Smith Company-would that raise debt to equity issues? It is sometimes better to purchase the stock of Smithon outright, however, in looking at the potential benefit of using the credit power of Johnson Services and issuing corporate bonds you would free up the cash necessary to make changes if they become a need. There is also the added benefit of the debt tax shield. IRC 514 expands on debt-finance income when one uses income gained by borrowing against investment property. (IRC 514) Obviously, an issue is the potential problem with debt to equity, however, given the losses posted by Johnson Services recently it seems expedient to explore corporate bonds or additional share opportunities and use the cash available to re-tool Smithon. By using the available debt tax shield, you stand to benefit in numerous ways from using Johnson Services as a backer for purchasing Smithon. One potential disadvantage is that issuing debt can increase the risk of bankruptcy. (Damodaran 9) b. Should I convert Smithon to an S corporation and change the fiscal year end to a calendar year end? c. What potential income tax ramifications exist for me if I purchase the stock of Smithon and convert it to an S corporation? If you use the credit available from Johnson to purchase Smithon it would be beneficial to retain the C status of that corporation and take full advantage of the corporate tax benefits resulting. However, if you decide to use cash to purchase Smithon and end up with a large personal liability then converting it to S status would become more beneficial. Due to increased taxes on a personal level with the utilization of “mean testing” it would seem more personally beneficial to retain the C status of the corporation and keep the potential income from that business out of the data included in the “mean testing.” The income of an S corporation is generally taxed to the shareholders of that corporation rather than the corporation itself. (IRS form 2553 1) As for changing from a fiscal to calendar year end, this would result in filing a short tax year, and additional expenses administratively with no real net benefit. d. Should I merge Johnson Services and Smithon? What type of merger or acquisition would be best (i.e., A type, etc.)? Because there are no available data sets as to the similarities between Smithon Widgets manufacturing and Johnson Services it would be necessary to further explore the ability for both companies to function together. If a merger becomes an option and is pursued successfully the most effective merger type given the information currently available would be the conglomeration merger. This type of merger is between two businesses that are involved in totally unrelated activities. There is the ...Download file to see next pagesRead More
Share:
Tags
Cite this document
(“Tax law Case Study Example | Topics and Well Written Essays - 1000 words”, n.d.)
Retrieved from https://studentshare.org/geography/1407546-tax-law
(Tax Law Case Study Example | Topics and Well Written Essays - 1000 Words)
https://studentshare.org/geography/1407546-tax-law.
“Tax Law Case Study Example | Topics and Well Written Essays - 1000 Words”, n.d. https://studentshare.org/geography/1407546-tax-law.
Comments (0)
Click to create a comment or rate a document

CHECK THESE SAMPLES OF Tax law

In th...
8 Pages(2000 words)Case Study
sponsored ads
Save Your Time for More Important Things
Let us write or edit the case study on your topic "Tax law" with a personal 20% discount.
GRAB THE BEST PAPER

Let us find you another Case Study on topic Tax law for FREE!