Comments (0)
Add to wishlistDelete from wishlist
Cite this document
Summary
The universe is normally separated by eight spheres. This is by using the compilation argument. Some of the universe creatures like the moon, sun and stars among with the planet have spheres that rotate with motion.
32. The distance from A to C is longer than the distance…
Download full paperFile format: .doc, available for editing
HIDE THIS PAPERGRAB THE BEST PAPER96.1% of users find it useful 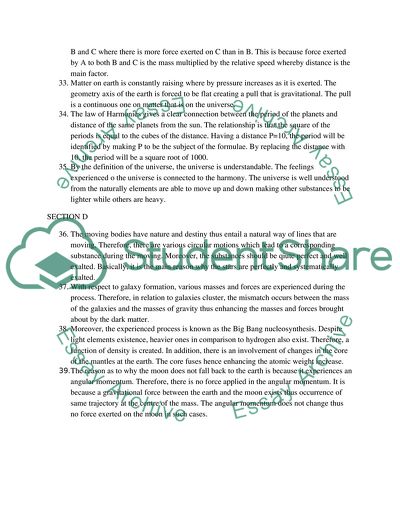 ANSWER SHEET TO THE EXAM SECTION A A 2. B 3. C 4. A 5. A 6. B 7. A 8. B 9. B 10. A SECTION B 11. B 12. C 13. A 14. A 15. D 16. C 17. C 18. E 19. B20. C
21. D
22. A
23. B
24. D
25. B
26. C
27. C
28. E
29. A
30. E
SECTION C
31. The universe is normally separated by eight spheres. This is by using the compilation argument. Some of the universe creatures like the moon, sun and stars among with the planet have spheres that rotate with motion.
32. The distance from A to C is longer than the distance from A to B. Mass of B is smaller than the mass in C. The two factors enables the force difference between force exerted on B and C where there is more force exerted on C than in B. This is because force exerted by A to both B and C is the mass multiplied by the relative speed whereby distance is the main factor.
33. Matter on earth is constantly raising where by pressure increases as it is exerted. The geometry axis of the earth is forced to be flat creating a pull that is gravitational. The pull is a continuous one on matter that is on the universe.
34. The law of Harmonies gives a clear connection between the period of the planets and distance of the same planets from the sun. The relationship is that the square of the periods is equal to the cubes of the distance. Having a distance P=10, the period will be identified by making P to be the subject of the formulae. By replacing the distance with 10, the period will be a square root of 1000.
35. By the definition of the universe, the universe is understandable. The feelings experienced o the universe is connected to the harmony. The universe is well understood from the naturally elements are able to move up and down making other substances to be lighter while others are heavy.
SECTION D
36. The moving bodies have nature and destiny thus entail a natural way of lines that are moving. Therefore, there are various circular motions which lead to a corresponding substance during the moving. Moreover, the substances should be qiute perfect and well exalted. Basically, it is the main reason why the stars are perfectly and systematically exalted.
37. With respect to galaxy formation, various masses and forces are experienced during the process. Therefore, in relation to galaxies cluster, the mismatch occurs between the mass of the galaxies and the masses of gravity thus enhancing the masses and forces brought about by the dark matter.
38. Moreover, the experienced process is known as the Big Bang nucleosynthesis. Despite light elements existence, heavier ones in comparison to hydrogen also exist. Therefore, a function of density is created. In addition, there is an involvement of changes in the core of the mantles at the earth. The core fuses hence enhancing the atomic weight increase.
39. The reason as to why the moon does not fall back to the earth is because it experiences an angular momentum. Therefore, there is no force applied in the angular momentum. It is because a gravitational force between the earth and the moon exists thus occurrence of same trajectory at the centre of the mass. The angular momentum does not change thus no force exerted on the moon in such cases. Read More
Share:
Tags
Cite this document
(“Homework Assignment Example | Topics and Well Written Essays - 500 words - 20”, n.d.)
Retrieved from https://studentshare.org/formal-science-physical-science/1665386-homework

... Homework Answers Part One Question Planning for an uncertain situation encompasses a broad process known as contingency planning. This broad process consists of the following components: A plan for incident response A plan for disaster recovery A plan for business continuity These three components account for all-round variables that constitute an uncertain occurrence, thereby informing the planning process for the underlying situation. Question 2 NIST defines a CP process that is made up of seven steps, which include: i. Formulation of a policy statement in relation to contingency planning. ii. Conducting an analysis of business impact. iii. Determination of preventive controls. iv. Development of strategies for recovery. v. Development...
3 Pages(750 words)Case Study

...Graduation Speech by Kay McDavid I feel deeply honored as a Barnaby College alumnus to address a graduating There have been notable graduates of the college, since it was founded in 1921. I am grateful to be here to witness the 275, second highest number of graduates in the history of Barnaby College, graduate. 28 years ago, I sat in the same seats you are seated. I felt pride, gratitude, and exhilaration. However, no one is able to make it to graduation without the help of friends and family. Therefore, remember to share your gratitude with those people that helped you through. From here, you will get your first job, and life will change, as you face new challenges in your career. However, as a Barnaby College graduate, I believe...
1 Pages(250 words)Essay

... Homework Questions American farmers were faced with various economic and social ills at the turn of the century. Farmers got faced with a banking system that insisted on the gold standard as its monetary system. The railroad system at the time was also deemed as capricious and unfair. The farmers also got faced with rampant land speculation that drove prices for land up. The populist movement referred to the advocacy of the people’s party in 1892 (Roark et al 352). The movement advocated against the industrial society at the time. The movement got based around poor and hard-pressed farmers. The movement called for the formation of a sub treasury, land reform, currency reform, and the empowerment of the common people. The movement...
1 Pages(250 words)Coursework

...Computer Sciences and Information Technology Introduction As a consultant, there are several recommendations that I would give the Peachtree Healthcare centre to address the challenges that it faces while trying address its IT problems. Some of the recommendations that I will give to the institution are discussed below. Recommendations The institution should evaluate the available choices in the institution through focusing on some specific issues to the business and the current state of the systems of IT in Peachtree. Through this, the most appropriate solutions to the problems will be achieved. Peachtree should also try to focus on standardizing the models that they use in carrying out their businesses and dedicate the needs... Sciences and ...
4 Pages(1000 words)Research Paper
sponsored ads
Save Your Time for More Important Things
Let us write or edit the assignment on your topic "Homework" with a personal 20% discount.
GRAB THE BEST PAPER

Let us find you another Assignment on topic Homework for FREE!