Comments (0)
Add to wishlistDelete from wishlist
Cite this document
Summary
This work "Intangibles Seek Due Recognition" discusses intangible assets that are represented by patents, goodwill, copyrights, human capital, intellectual property. The author outlines a required radical change in rules, regulations, and standards for the recognition, measurement, and valuation of intangible assets. …
Download full paperFile format: .doc, available for editing
HIDE THIS PAPERGRAB THE BEST PAPER98.2% of users find it useful 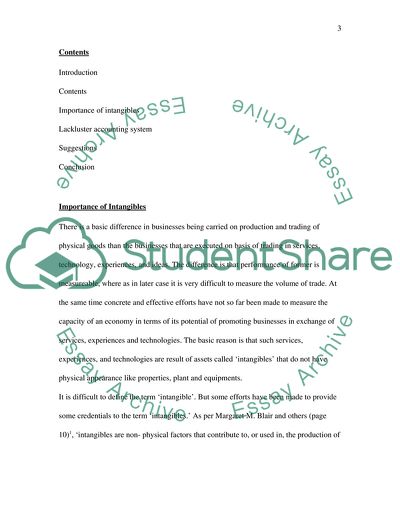 Download file to see previous pages This remaining value is the value of non-physical assets called by accountants as intangible assets. Intangibles are mostly represented by patents, goodwill, copyrights, human capital, intellectual property, and like others. Even successful companies some times are not fully aware of the market worth of such assets. One view is that the fault lies with the late recognition of intangibles by the accountants and that too with a partial, incomplete and unsatisfactorily approach. Accounting standards developed so far have not given that due recognition or prominence to intangibles. It is really amazing that more than ninety percent of accounting regulatory nitty-gritty surrounds less than half of the company’s capitalization factors and other half goes begging for proper recognition at their true value. It is time that due recognition is given to intangible assets that contribute effectively to the value of the companies. An effort is made out in this write up to bring out the reasons for such accounting negligence to the fore with recommendations to start presenting the financial statements as ‘true and fair’ in the real sense of this terminology.
There is a basic difference in businesses being carried on production and trading of physical goods than the businesses that are executed on the basis of trading in services, technology, experiences, and ideas. The difference is that the performance of the former is measurable, whereas in the later case it is very difficult to measure the volume of trade. At the same time, concrete and effective efforts have not so far been made to measure the capacity of an economy in terms of its potential of promoting businesses in exchange for services, experiences, and technologies. The basic reason is that such services, experiences, and technologies are a result of assets called ‘intangibles’ that do not have physical appearances like properties, plant, and equipment.
It is difficult to define the term ‘intangible’. But some efforts have been made to provide some credentials to the term ‘intangibles.’  As per Margaret M. Blair and others (page 10)[i], ‘intangibles are non- physical factors that contribute to, or used in, the production of goods or the provision of services or that are expected to generate future productive benefits to the individuals or the firm that control their use.’ ...Download file to see next pagesRead More
Share:
Cite this document
(Intangibles Seek Due Recognition Coursework Example | Topics and Well Written Essays - 1750 words, n.d.)
Intangibles Seek Due Recognition Coursework Example | Topics and Well Written Essays - 1750 words. Retrieved from https://studentshare.org/finance-accounting/1720738-in-the-current-business-context-the-accounting-profession-has-been-criticised-for-its-lack-of-progress-in-accounting-for-the-notion-of-the-intangible-and-its-associated-performance-output-discuss
(Intangibles Seek Due Recognition Coursework Example | Topics and Well Written Essays - 1750 Words)
Intangibles Seek Due Recognition Coursework Example | Topics and Well Written Essays - 1750 Words. https://studentshare.org/finance-accounting/1720738-in-the-current-business-context-the-accounting-profession-has-been-criticised-for-its-lack-of-progress-in-accounting-for-the-notion-of-the-intangible-and-its-associated-performance-output-discuss.
“Intangibles Seek Due Recognition Coursework Example | Topics and Well Written Essays - 1750 Words”. https://studentshare.org/finance-accounting/1720738-in-the-current-business-context-the-accounting-profession-has-been-criticised-for-its-lack-of-progress-in-accounting-for-the-notion-of-the-intangible-and-its-associated-performance-output-discuss.
Comments (0)
Click to create a comment or rate a document

CHECK THESE SAMPLES OF Intangibles Seek Due Recognition

Face Recognition, Identification, & Classification An individual recognizes a face by analyzing the features of the presented face, and drawing relationships between he observed features to form meaningful information for the self (Diamond & Cary, 1986). Humans receive information from the senses about the individual components of an object – like a face – and also extract information about the relationship shared by those individual components such that they form a whole object. Diamond & Cary (1986) describe this as the ‘first order relational information’. According to them, this information is not enough for appropriate face recognition, as this information only gives details like the relative positions of components and the...
3 Pages(750 words)Essay

...FACE RECOGNITION Face recognition is chiefly used in forensic science. The technicalities in recognition process are the ongoing research modalities. The use of face recognition in judiciary involves both the identification part of the process and the confidence part of the eye witness. The relation between the accuracy and confidence are being subjected to many research. Researchers have commonly accepted the fact that accuracy and confidence are loosely tied with one another. The purpose of this paper is to identify any more factors to be included in the optimality hypothesis so that the hypothesis can be put in to further tests. Thirty two students viewed face stimuli consisting 36 photographs during study phase and 76 photographs...
9 Pages(2250 words)Essay

...Memo After a careful analysis and review of our accounting methods, and comparing them with the upcoming requirements and implications of the emerging issues task force EITF 00-21: Revenue Arrangements with Multiple Deliverables I have decided that we should modify our accounting and revenue recognition practices to better conform to the pronouncements and procedures established by EITF 00-21. As you already know the early adoption of the recommended practices under the new proposal, will boaster the company’s image and reputation in the industry by demonstrating an enhanced level of seriousness and professionalism not necessarily established by our competition. Although it may initially seem counterintuitive to adopt the practices...
6 Pages(1500 words)Essay

...﻿Analysis of Talent Seek For a recruitment process to bear desirable outcomes, it needs to be comprehensive and reflective of the needs of the clients. Also, the characteristic processes should be efficient and fast. This helps in saving time for both the employer and the prospective employees. This is noteworthy especially considering that the most competent work force greatly appreciates efficiency and courtesy. Thus if Talent Seek recruitment agency does not review its operations, it is unlikely to meet its organizational goals and objectives. Talent Seek’s recruitment process is very comprehensive and undoubtedly, candidates that are employed through the firm meet all the expectations. Notably, it has an elaborate review process...
2 Pages(500 words)Essay

...﻿Seek Godly Counsel Handling finances wisely in one’s life is a paramount thing in their future. How one handles their money will largely determine how they budget their day-to-day life. The big mistake that most people do is not seeking God's counsel. One can get these counsels from the bible or talk to godly persons. Most people resort to the result of prayer after seeing that everything else has failed, which, in most cases do not work out. The bible says “cursed is the man who relies on his own understanding.” psalm 1:1 says, “blessed is the man who does not walk in the counsel of the ungodly.” Anyone who is in need of any monetary advice shouldn't seek it from the ungodly people. Pray about something you want to do and talk to godly...
1 Pages(250 words)Assignment

... Revenue Recognition Revenue is an important aspect to individuals who use financial ments. Revenue is used in assessing the performance of the company. In the United States of America, Generally Accepted Accounting Principles and International Financial Reporting Standards are different (Bonham 2008). Current proposed standards are in line with the goals of standardizing revenue recognition. In the United States, GAAP consists of wide revenue concepts and various requirements for numerous industries or transactions. The transactions can be the same economically but results to different accounting. International Financial Reporting Standards don’t have many requirements on revenue recognition. IAS 18 and IAS 11 are international accounting...
1 Pages(250 words)Assignment

Modern financial accounting is highly dependent on double entry bookkeeping. However, the origin of double entry bookkeeping is not clearly known of yet literatures suggest that in almost every civilization, financial record keeping was followed. Franciscan Friar, Luca Pacioli is often associated with double entry bookkeeping because he published a book on the same in 1494. In the book, he spoke of debit and credit as well as of liabilities and assets. Pacioli also advised in the book about periodic profit calculation and yearly closing of books (Previts, Parker & Coffman, 1990).
Around sixteenth century, noticeable changes were proposed and incorporated in the bookkeeping techniques for the purpose of recording various kinds...
13 Pages(3250 words)Research Paper

... remain the same even after the changing the method to impairment testing. Intangibles have become very important to businesses, but are also continuously contributing to accounting problems. The basic reason is the limitation of valuation process. It is difficult to assign historical costs to intangible like brand value and at the same time it is difficult to ascertain its fair value in absence of a scientific method to ascertain value of its future economic gains to the entity. Something concrete is required to be done to sort out this puzzle in order to provide due recognition and valuation to while measuring intangibles for accounting purposes. Revolutionary changes are required for this purpose. References...
7 Pages(1750 words)Term Paper
sponsored ads
Save Your Time for More Important Things
Let us write or edit the coursework on your topic "Intangibles Seek Due Recognition" with a personal 20% discount.
GRAB THE BEST PAPER

Let us find you another Coursework on topic Intangibles Seek Due Recognition for FREE!