Comments (0)
Add to wishlistDelete from wishlist
Cite this document
Summary
Wal-Mart: Company Analysis Executive Summary The process of organizational assessment benefits a business concern to identify its strengths and weaknesses and thereby improve its operational efficiency. An organizational assessment is mainly performed to point out any issue/issues that can have potential impact on the firm’s operational performance…
Download full paperFile format: .doc, available for editing
HIDE THIS PAPERGRAB THE BEST PAPER96.1% of users find it useful 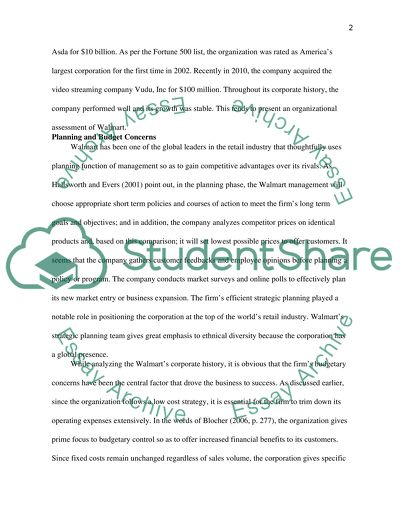 Download file to see previous pages From this assessment study, environmental safety has been identified as the most potential impediment to Walmart’s growth. Since people today give great emphasis to ecological sustainability, they are less likely to compromise with environmental safety. Introduction Wal-Mart is a US based multinational corporation operating under the retail industry, and it runs a network of huge discount stores and warehouse stores across the globe. The company was founded in 1962 by Sam Walton. As Frank (2006) describes, since Walton could neither renew the lease nor find a new location, he opened a new franchise in Bentonville under the name ‘Walton’s Five and Dime’. The company opened its first Walmart Discount City store in Rogers in 1962 and subsequently expanded across Arkansas over the next five years. In 1968, the firm opened its stores in Missouri, Sikeston, and Oklahoma. On 31st October 1969, the organization was incorporated as Wal-Mart Stores, Inc. In 1970, the company started its operations as a publicly held company and it was subsequently listed on the New York Stock Exchange. The company opened its first Walmart Supercenter in Washington in 1988 (Frank, 2006). ...
This tends to present an organizational assessment of Walmart. Planning and Budget Concerns Walmart has been one of the global leaders in the retail industry that thoughtfully uses planning function of management so as to gain competitive advantages over its rivals. As Hallsworth and Evers (2001) point out, in the planning phase, the Walmart management will choose appropriate short term policies and courses of action to meet the firm’s long term goals and objectives; and in addition, the company analyzes competitor prices on identical products and, based on this comparison; it will set lowest possible prices to offer customers. It seems that the company gathers customer feedbacks and employee opinions before planning a policy or program. The company conducts market surveys and online polls to effectively plan its new market entry or business expansion. The firm’s efficient strategic planning played a notable role in positioning the corporation at the top of the world’s retail industry. Walmart’s strategic planning team gives great emphasis to ethnical diversity because the corporation has a global presence. While analyzing the Walmart’s corporate history, it is obvious that the firm’s budgetary concerns have been the central factor that drove the business to success. As discussed earlier, since the organization follows a low cost strategy, it is essential for the firm to trim down its operating expenses extensively. In the words of Blocher (2006, p. 277), the organization gives prime focus to budgetary control so as to offer increased financial benefits to its customers. Since fixed costs remain unchanged regardless of sales volume, the corporation gives specific attention to ...Download file to see next pagesRead More
Share:
Tags
Cite this document
(“Wal-Mart Corporation: Company Analysis Term Paper”, n.d.)
Retrieved from https://studentshare.org/finance-accounting/1400091-see-instruction

In th...
8 Pages(2000 words)Case Study
sponsored ads
Save Your Time for More Important Things
Let us write or edit the term paper on your topic "Wal-Mart Corporation: Company Analysis" with a personal 20% discount.
GRAB THE BEST PAPER

Let us find you another Term Paper on topic Wal-Mart Corporation: Company Analysis for FREE!