Comments (0)
Add to wishlistDelete from wishlist
Cite this document
Summary
The paper gives detailed information about the destruction caused by the farming of palm oil, an edible plant oil of which has become an ingredient in many products for consumers today. Its products are used in manufacturing products to be used at production and even consumer level…
Download full paperFile format: .doc, available for editing
HIDE THIS PAPERGRAB THE BEST PAPER96% of users find it useful 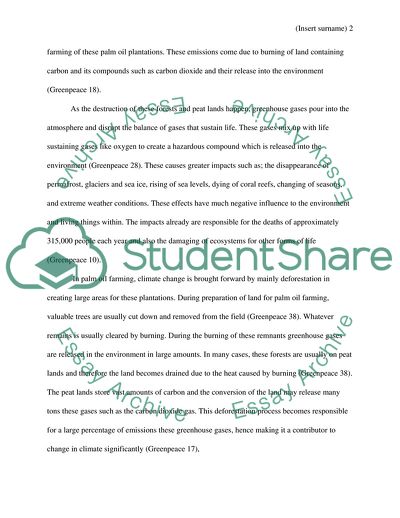 Extract of sample "Destruction Caused by the Farming of Palm Oil"

Download file to see previous pages The palm oil farming has recently become more pervasive and causes destruction in many different ways. These palm oil plantations need a rainforest climate – high temperatures and humidity – and a lot of lands too (Greenpeace 28). Due to this, the farming of palm oil becomes the leading cause of destructions of rainforests and hence gives rise to problems within the environment, climate, and people and animals living in these environments mainly through deforestation of which is the main basis for these problems (Greenpeace 18)

Climate change is considered basically the greatest threat to the environment, of which palm oil farming contributes to a great aspect. It is caused by mainly the buildup of greenhouse gases – from the burning of fossil fuels and destruction of areas with a large amount of carbon like the rainforests used in palm oil farming (Greenpeace 17). It refers to the increase in global temperatures averagely. This is caused by natural events as well as human activities such as the farming of these palm oil plantations. These emissions come due to the burning of land containing carbon and its compounds such as carbon dioxide and its release into the environment (Greenpeace 18).

... billion US dollars. The palm oil sector faces robust competition from the soybean and that of the rapeseed producers adding to the grave concerns of deforestation, killing and destruction of the wildlife with the devastation of the life of the orangutans and many wild life species and that of the carbon emission that results from clearing the peat land (Chow, 2011, p.24). Thus the controversy has cropped up regarding the usage of the palm oil and the Australian government in 2011with a group of senators including Nick Xenohpon introduced the Food Standards amendment bill to the Senate. If the bill is legalized then the manufacturers will be required to accurately label the Palm oil among its ingredients. The Bill would have allowed...
12 Pages(3000 words)Assignment

...?Palm Overview Table of Contents Introduction 3 Palm Inc. 3 Current Situation 4 Mission & Vision 4 Strengths 4 Weaknesses 5 Competitive Analysis 5 Current major competitors (Top 3) 5 General Environmental Analysis 7 Recommendations 8 Mission, Vision and Objectives 8 References 9 Introduction Merger and acquisition has been one of the most widely practiced strategies in the business world over the past few decades. It is considered as an important strategy in the process of beating the competitors. However, prior to merger and acquisition it is very crucial to have a clear picture about both the organizations that are going to be merged with each other. Recently, the business world has observed the merger between two of the most popular...
5 Pages(1250 words)Essay

...?Gary Barnett ENG 113-01/Spring Comparison/Contrast Essay TREE FARMING vs. AGRICULTURAL FARMING Agricultural farming is a very broad term, meaning cultivation of crops and animals for the sustenance of humans. Tree farming on the other hand involves building of large plantations in which trees are grown in optimum conditions to provide timber for different purposes. Hence Agricultural farming fulfills our bodily needs while tree farming completes our material needs. Tree farmers are an important group of forest landowners who provide vital support to the economic development. These tree farmers voluntarily manage their lands and strive to achieve utmost production of wood. Agricultural farmers are employees rather than private land owners...
2 Pages(500 words)Essay

...?Farming: Potatoes’ Role in America during the War Potatoes have been central to almost every kind of culture. In America, it is currently being favoured in a number of food shops. From humble cafes to five-star-restaurants, this kind of crop has been popular. How about in history? Did this tuber have an impact on major occurrences in the past? This paper delves into the significance of potatoes on Americans throughout historical war fares. Potato originated from the Spanish word, “patata”. It has been one of Spain’s popular crops since the late 1500’s (Romans 8). This word is a combination of “Taino batata” which stands for the sweet potato and the “Quecha papa” which is the actual potato. Reportedly, it was first cultivated in Peru...
4 Pages(1000 words)Essay

... the extra labor hours and the high concentration of land required to sustain the industry. One the most prolific opponents to the "organic" industry claims, that the increased destruction of forests to make way for the land required to expand its land requirement, causes as much, if not more harm to the planet and the population, than any conventional food process. Risk Management All business faces risk and needs to address the problem of risk management, and the Organic agriculture industry is no exception, as a series of organic farmer focus groups held between 2000 and 2001 recognized (James Hanson et al. 2004). The potential risks cover a number of diverse areas in this instance. The primary concern expressed by these groups...
30 Pages(7500 words)Essay

... Corporate Social Responsibility at Tesda The main developmental, sustainability and CSR issues relating to the productionof palm oil in Indonesia relates to the dependence on wealthy nations for development - as purported by dependency theory; stakeholder rights; and environmental issues. These are issues which face a number of countries that depend on multinational corporations in order to achieve economic growth. The essence of dependency theory is that a core of wealthy nations dominates production of goods in the periphery of poor nations that provide cheap labour and raw materials. The countries involved here are the United Kingdom (UK) and Indonesia. The UK is the wealthy nation which dominates the poor nation of Indonesia...
2 Pages(500 words)Essay

Unilever's participation in the Roundtable on Sustainable Palm Oil

... plantations for the production of palm oil and this has lead to clearing of forests to create space for these activities. Carbon dioxide is arrested from the atmosphere by these forests but due to their destruction, large amounts of carbon dioxide are released into the atmosphere thus reducing chances of it being arrested. In the recent past, the use of industrial fertilizer in farming has been on the increase as opposed to animal manure. Fertilizers rich in nitrogen affect the heat storage and their excess makes dead-zones in our oceans. They also create high levels of nitrate in water (Silver, 2008). Scientists anticipate that in the near future, the level of sea water will rise due to melting of ice in the Antarctica and Greenland. Many...
8 Pages(2000 words)Research Paper

Palm oil is used in one or two products sold in Western shops varying from Ben & Jerry’s ice cream to Dove soap. Labeling statutes in the United States allow palm oil to be registered simply as vegetable oil, and this makes clients not aware of its presence in the products being consumed (Accenture for Humanity United, Para1).
The investigation revealed that an estimated 3.7 million workers and consisted of thousands of underage laborers who are exposed to the abusive and dangerous working environment. Former workers who were interviewed confirmed that the labor contractor for a leading palm oil producing organization defrauded held captive and abused workers (Schuster Institute for Investigative Journalism at Brand...
14 Pages(3500 words)Research Paper
sponsored ads
Save Your Time for More Important Things
Let us write or edit the term paper on your topic "Destruction Caused by the Farming of Palm Oil" with a personal 20% discount.
GRAB THE BEST PAPER

Let us find you another Term Paper on topic Destruction Caused by the Farming of Palm Oil for FREE!