Comments (0)
Add to wishlistDelete from wishlist
Cite this document
Summary
The paper "Preservation of the Environment in The State of Hawaii in the United States" highlights that the expansion of the cafeteria would bring in benefits to the school as well as the Country in the form of taxes. The Laie Elementary School could not be denied, by law, the expansion it so desperately needs…
Download full paperFile format: .doc, available for editing
HIDE THIS PAPERGRAB THE BEST PAPER94.5% of users find it useful 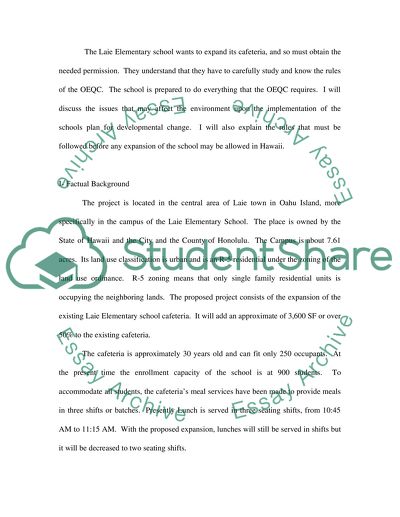 Download file to see previous pages The proposed buildings or expansion projects of existing structures owned or controlled by the agencies of the government on public land is not exempt from getting the governments permission. You can get said permission from the Environment Department. The Office of Environmental Quality Control (OEQC) is directly charged with issuing permits. The OEQC's primary task is to stimulate, expand and coordinate efforts to maintain the optimum quality of the States environment. All private, as well as public entities and agencies, must secure the aforementioned permission. This is how strict the government is that it requires itself, the Laie Elementary School is a government-controlled and operated school, to obtain permission to build from itself, the OEQC another agency of the government. This safeguard is to make sure that there will be no destruction of the environment in any way.
The Laie Elementary school wants to expand its cafeteria, and so must obtain the needed permission. They understand that they have to carefully study and know the rules of the OEQC. The school is prepared to do everything that the OEQC requires. I will discuss the issues that may affect the environment upon the implementation of the school's plan for developmental change. I will also explain the rules that must be followed before any expansion of the school may be allowed in Hawaii.
I- Factual Background
The project is located in the central area of Laie town in Oahu Island, more specifically in the campus of the Laie Elementary School. The place is owned by the State of Hawaii and the City and the County of Honolulu. The Campus is about 7.61 acres. It's land use classification is urban and is an R-5 residential under the zoning of the land use ordinance. R-5 zoning means that only single-family residential units are occupying the neighboring lands. The proposed project consists of the expansion of the existing Laie Elementary school cafeteria. It will add an approximate of 3,600 SF or over 50% to the existing cafeteria.
The cafeteria is approximately 30 years old and can fit only 250 occupants. At the present time, the enrollment capacity of the school is at 900 students. To accommodate all students, the cafeteria's meal services have been made to provide meals in three shifts or batches. Presently Lunch is served in three seating shifts, from 10:45 AM to 11:15 AM. With the proposed expansion, lunches will still be served in shifts but it will be decreased to two seating shifts.
The proposed expansion includes a dining area; new heater and electrical room; new tray return and wash area; locker room; toilet and office space. The existing kitchen will be made bigger to accommodate the needs of cooking for the ever-increasing school population. This will also ensure that meals are kept hot, preventing any bacterial growth and health issues that may arise from such growth.
This developmental change will also include a much-needed wastewater facility for the cafeteria. The facility will be connected to a local sewer system. At present, the cafeteria is not connected to a local sewer system. It uses a cesspool system. That pit poses environmental, health as well as safety concerns for the school and the surrounding areas. ...Download file to see next pagesRead More
Share:
Tags
Cite this document
(Hawaii Environmental Policay and Act (HEPA) Case Study, n.d.)
Hawaii Environmental Policay and Act (HEPA) Case Study. https://studentshare.org/environmental-studies/1505378-hawaii-environmental-policay-and-act-hepa
(Hawaii Environmental Policay and Act (HEPA) Case Study)
Hawaii Environmental Policay and Act (HEPA) Case Study. https://studentshare.org/environmental-studies/1505378-hawaii-environmental-policay-and-act-hepa.
“Hawaii Environmental Policay and Act (HEPA) Case Study”. https://studentshare.org/environmental-studies/1505378-hawaii-environmental-policay-and-act-hepa.
Comments (0)
Click to create a comment or rate a document

The Annexation of Hawaii

10 Pages(2500 words)Research Paper
sponsored ads
Save Your Time for More Important Things
Let us write or edit the case study on your topic "Preservation of the Environment in The State of Hawaii in the United States" with a personal 20% discount.
GRAB THE BEST PAPER

Let us find you another Case Study on topic Preservation of the Environment in The State of Hawaii in the United States for FREE!