Comments (0)
Add to wishlistDelete from wishlist
Cite this document
Summary
Discussing the Article “The Banning of GTA3 in Australia” Using the Game “Postal 2” In this paper, the researcher would like to explain the concepts listed in the article of Finn entitled “The Banning of GTA3 in Australia” (Finn 2006) from the book “The Meaning and Culture of Grand Theft Auto: Critical Essays” edited by Nate Garrelts, using the game “Postal 2.” In this case, the researcher would actually try focus on clearly explaining the concepts in the article about a violent game (Grand Theft Auto 3), using another violent game (Postal 2), which is even deemed by a popular video game website as the “most violent game ever” in their top 10 list (Chomick n…
Download full paperFile format: .doc, available for editing
HIDE THIS PAPERGRAB THE BEST PAPER92.7% of users find it useful 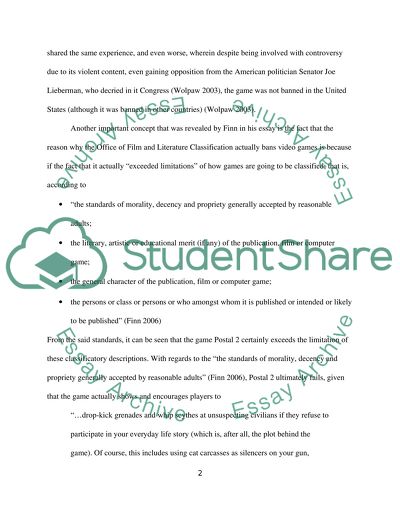 Extract of sample "Grand Theft Auto VS The Power-Go-Round"

6 Pages(1500 words)Coursework
sponsored ads
Save Your Time for More Important Things
Let us write or edit the essay on your topic "Grand Theft Auto VS The Power-Go-Round" with a personal 20% discount.
GRAB THE BEST PAPER

Let us find you another Essay on topic Grand Theft Auto VS The Power-Go-Round for FREE!