Comments (0)
Add to wishlist Delete from wishlist
Cite this document
Summary
i) Recession refers to represents a contraction in the business cycle resulting in decline in economy activity. It can be represented as a fall in GDP which comprises of Consumption, Investment, Government Expenditure and Net Exports (GDP(Y) = C+I+G+NX) (Michl, 2002)…
Download full paper File format: .doc, available for editing
HIDE THIS PAPERGRAB THE BEST PAPER97.3% of users find it useful 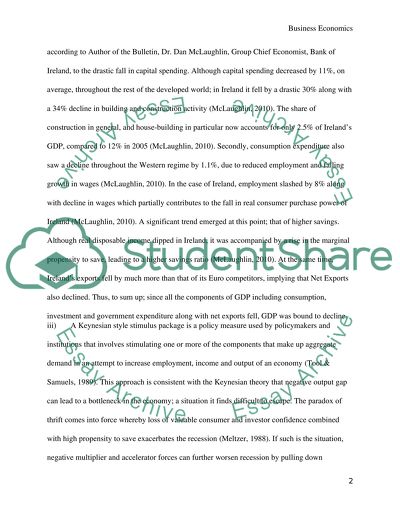 Download file to see previous pages Thus, a double-dip recession occurs when the GDP rises to positive levels (the recovery period) followed by negative levels (another recession) (Quiggin, 2010). It is often referred to as the “W-shaped” recession (Quiggin, 2010). One of the most prominent double-dip recessions took place in the 1980’s in the United States (Appendix 1) (Quiggin, 2010). Two recessions occurred in the 1980’s in the United States. Initially, the economy shrunk by 8%, then grew at 8% after which the economy dipped into the second recession due to the Federal Reserve’s policy to raise interest rates to curb inflation (Quiggin, 2010). Following that, the economy re-entered into growth for the rest of the years (Quiggin, 2010). Although, there are no definite characteristics that define a recession, there are a few symptoms that are generally agreed by economists. First is the inverted yield curve model which was determined by Jonathan H. Wright which uses 10 year yield of Treasury Securities as an input (LaBonte et al., 2010). Second, is the change in unemployment rate over a three month period (LaBonte et al., 2010). Third, lower prices of assets including real estate and financial assets as well as large personal and corporate debts (LaBonte et al., 2010). ii) The contraction in Ireland’s economy was of particular significance at a time when other Euro nations were showing positive growth rates. This fall in Ireland’s GDP is attributed firstly, according to Author of the Bulletin, Dr. Dan McLaughlin, Group Chief Economist, Bank of Ireland, to the drastic fall in capital spending. Although capital spending decreased by 11%, on average, throughout the rest of the developed world; in Ireland it fell by a drastic 30% along with a 34% decline in building and construction activity (McLaughlin, 2010). The share of construction in general, and house-building in particular now accounts for only 2.5% of Ireland’s GDP, compared to 12% in 2005 (McLaughlin, 2010). Secondly, consumption expenditure also saw a decline throughout the Western regime by 1.1%, due to reduced employment and falling growth in wages (McLaughlin, 2010). In the case of Ireland, employment slashed by 8% along with decline in wages which partially contributes to the fall in real consumer purchase power of Ireland (McLaughlin, 2010). A significant trend emerged at this point; that of higher savings. Although real disposable income dipped in Ireland, it was accompanied by a rise in the marginal propensity to save, leading to a higher savings ratio (McLaughlin, 2010). At the same time, Ireland’s exports fell by much more than that of its Euro competitors, implying that Net Exports also declined. Thus, to sum up; since all the components of GDP including consumption, investment and government expenditure along with net exports fell, GDP was bound to decline. iii) A Keynesian style stimulus package is a policy measure used by policymakers and institutions that involves stimulating one or more of the components that make up aggregate demand in an attempt to increase employment, income and output of an economy (Tool & Samuels, 1989). This approach is consistent with the Keynesian theory that negative output gap can lead to a bottleneck in the economy; a situation it finds difficult to escape. The paradox of thrift comes into force whereby loss of valuable consumer and investor confidence combined with high propensity to save exacerbates the recession (Meltzer, 1988). If such is the situation, ...Download file to see next pages Read More
Share:
Tags
Cite this document
(“Business economic Essay Example | Topics and Well Written Essays - 1750 words”, n.d.)
Retrieved from https://studentshare.org/environmental-studies/1422099-business-economic

CHECK THESE SAMPLES OF Business economic

...Introduction Globalization, one of the most hotly debated issues means global capitalism to some while others consider it to be the continuation of modernism with the forces of wealth, progress, democracy and happiness at play (Kellner, 2002). Globalization is considered to be beneficial which promotes economic prosperity, cultural diversity and technological advancement. According to the critical social theory, technology and capital work together to create a new globalized and interconnected world. While each force of globalization is important, technological revolution has impacted the business models, value creation and differentiation (Spelman, 2010). The cloud computing technologies that have made the popular social networking...
7 Pages (1750 words) Coursework

The phenomenon of globalization of markets has resulted in both advantages and disadvantages. It has resulted in the convergence in the requirement of features in a product and augmentation of the intensity of B2B and B2C communica...
7 Pages (1750 words) Coursework
sponsored ads
Save Your Time for More Important Things
Let us write or edit the essay on your topic "Business economic" with a personal 20% discount.
GRAB THE BEST PAPER

Let us find you another Essay on topic Business economic for FREE!