Comments (0)
Add to wishlistDelete from wishlist
Cite this document
Summary
Business Economics in the Energy Industry Introduction This paper examines the global energy industry and takes a look to forecast energy prices by the last quarter of this year. The industry comprises the production and sale of energy in the various forms it takes such as the oil and gas industries, coal, electricity and nuclear industries…
Download full paperFile format: .doc, available for editing
HIDE THIS PAPERGRAB THE BEST PAPER95.1% of users find it useful 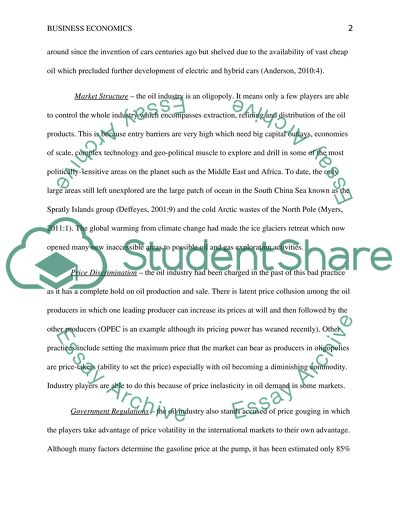 Download file to see previous pages The largest consumers of fossil fuels are the automobile industry and the electric power generation industry. Major manufacturers of the world also rely mostly on bunker fuels to run their factories. What “peak oil” means is that oil production is now on a downward slope due to declining oil production from rapid depletion of this non-renewable energy source. Oil is also an energy that has security risks involved as its source, chiefly in the Middle East, has been wracked by production disruptions lately. Economic development for the past several decades has been anchored on the assumption of cheap oil supplies but this is not true anymore. Fossil fuels or hydrocarbons have supplied the most of energy requirements for transportation and also for the production of fertilizers, plastics, fibers, pesticides, detergents and even pharmaceuticals (Abdullah, 2005:18). It is quite ironic the automobile industry is only now again reviving electric cars although the technology had been around since the invention of cars centuries ago but shelved due to the availability of vast cheap oil which precluded further development of electric and hybrid cars (Anderson, 2010:4). Market Structure – the oil industry is an oligopoly. ...
To date, the only large areas still left unexplored are the large patch of ocean in the South China Sea known as the Spratly Islands group (Deffeyes, 2001:9) and the cold Arctic wastes of the North Pole (Myers, 2011:1). The global warming from climate change had made the ice glaciers retreat which now opened many new inaccessible areas to possible oil and gas exploration activities. Price Discrimination – the oil industry had been charged in the past of this bad practice as it has a complete hold on oil production and sale. There is latent price collusion among the oil producers in which one leading producer can increase its prices at will and then followed by the other producers (OPEC is an example although its pricing power has weaned recently). Other practices include setting the maximum price that the market can bear as producers in oligopolies are price-takers (ability to set the price) especially with oil becoming a diminishing commodity. Industry players are able to do this because of price inelasticity in oil demand in some markets. Government Regulations – the oil industry also stands accused of price gouging in which the players take advantage of price volatility in the international markets to their own advantage. Although many factors determine the gasoline price at the pump, it has been estimated only 85% of price changes are due to changes in demand conditions worldwide. This is further complicated by growing demand from strong powerful economies like China and India. In the United States, Robinson-Patman Act (1936) makes price discrimination an illegal practice. It is rarely enforced due to the difficulties in monitoring volatility and the many factors driving gas prices. Global Business Environment – the industrialized ...Download file to see next pagesRead More
Share:
Tags
Cite this document
(“Business economics Essay Example | Topics and Well Written Essays - 1000 words”, n.d.)
Retrieved from https://studentshare.org/environmental-studies/1422084-business-economics

CHECK THESE SAMPLES OF Business economics

...Introduction Globalization, one of the most hotly debated issues means global capitalism to some while others consider it to be the continuation of modernism with the forces of wealth, progress, democracy and happiness at play (Kellner, 2002). Globalization is considered to be beneficial which promotes economic prosperity, cultural diversity and technological advancement. According to the critical social theory, technology and capital work together to create a new globalized and interconnected world. While each force of globalization is important, technological revolution has impacted the business models, value creation and differentiation (Spelman, 2010). The cloud computing technologies that have made the popular social networking...
7 Pages(1750 words)Coursework
sponsored ads
Save Your Time for More Important Things
Let us write or edit the essay on your topic "Business economics" with a personal 20% discount.
GRAB THE BEST PAPER

Let us find you another Essay on topic Business economics for FREE!