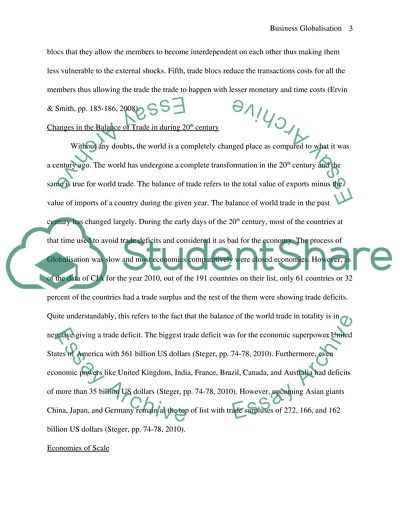 Download file to see previous pages Trading Blocs A trading bloc refers to the agreement between certain countries to reduce trade restrictions, tariffs and other trade barriers for each other while imposing strict trade barriers with other nonmember nations. Without any doubts, trade blocs like ‘European Economic Community’ (ECC) and ‘North American Free Trade Agreement’ (NAFTA) exist because they provide great advantages to the member nations (Prempeh, Mensah & Adjibolosoo, pp. 98-99, 2004). First, large markets created through trading blocs allow production to take place in bulk, which in turn means that firms can take advantage of economies of scale. Second, companies within the trading blocs come closer to each other, which lead to greater competition (Wiarda, pp. 93-98, 2007). Quite understandably, greater competition leads to higher level of efficiency. Third, when tariffs decrease due to trade blocs, the cost of imports goes down and consumers can purchase products with lower prices. Fourth, an individual country may not enjoy that political and economic authority over the globe but a group of countries certainly can have their voice heard (Rossi, pp. 304-305, 2007). In fact, this remains the biggest possible advantage of trade blocs that they allow the members to become interdependent on each other thus making them less vulnerable to the external shocks. Fifth, trade blocs reduce the transactions costs for all the members thus allowing the trade the trade to happen with lesser monetary and time costs (Ervin & Smith, pp. 185-186, 2008). Changes in the Balance of Trade in during 20th century Without any doubts, the world is a completely changed place as compared to what it was a century ago. The world has undergone a complete transformation in the 20th century and the same is true for world trade. The balance of trade refers to the total value of exports minus the value of imports of a country during the given year. The balance of world trade in the past century has changed largely. During the early days of the 20th century, most of the countries at that time used to avoid trade deficits and considered it as bad for the economy. The process of Globalisation was slow and most economies comparatively were closed economies. However, as of the data of CIA for the year 2010, out of the 191 countries on their list, only 61 countries or 32 percent of the countries had a trade surplus and the rest of the them were showing trade deficits. Quite understandably, this refers to the fact that the balance of the world trade in totality is in negative giving a trade deficit. The biggest trade deficit was for the economic superpower United States of America with 561 billion US dollars (Steger, pp. 74-78, 2010). Furthermore, even economic powers like United Kingdom, India, France, Brazil, Canada, and Australia had deficits of more than 35 billion US dollars (Steger, pp. 74-78, 2010). However, upcoming Asian giants China, Japan, and Germany remain at the top of list with trade surpluses of 272, 166, and 162 billion US dollars (Steger, pp. 74-78, 2010). Economies of Scale With Globalisation and increasing international trade, economies of scale have emerged as an extremely important factor in expansion and production of various industries. Economies of scale refer to ‘the phenomenon where the cost per unit decreases with increasing production’ (Rossi, pp. 304-305, 2007). It allows the firm to lower its costs and gain greater market share or the firm may decide to maintain the ...Download file to see next pages Read More
Share:
Tags
Cite this document
(“BUSINESS GLOBALISATION Essay Example | Topics and Well Written Essays - 1750 words”, n.d.)
Retrieved from https://studentshare.org/environmental-studies/1421908-business-globalisation

CHECK THESE SAMPLES OF BUSINESS GLOBALISATION

...Introduction Globalization, one of the most hotly debated issues means global capitalism to some while others consider it to be the continuation of modernism with the forces of wealth, progress, democracy and happiness at play (Kellner, 2002). Globalization is considered to be beneficial which promotes economic prosperity, cultural diversity and technological advancement. According to the critical social theory, technology and capital work together to create a new globalized and interconnected world. While each force of globalization is important, technological revolution has impacted the business models, value creation and differentiation (Spelman, 2010). The cloud computing technologies that have made the popular social networking...
7 Pages (1750 words) Coursework
sponsored ads
Save Your Time for More Important Things
Let us write or edit the essay on your topic "BUSINESS GLOBALISATION" with a personal 20% discount.
GRAB THE BEST PAPER

Let us find you another Essay on topic BUSINESS GLOBALISATION for FREE!