Comments (0)
Add to wishlistDelete from wishlist
Cite this document
Summary
This essay stresses that Nature is one of the most prominent waste producers. Nature is able to recycle whatever the wastes produced by it so that waste accumulation may not take place on earth. Apart from nature, all the living things including human are producing huge amounts of wastes on earth. …
Download full paperFile format: .doc, available for editing
HIDE THIS PAPERGRAB THE BEST PAPER97.5% of users find it useful 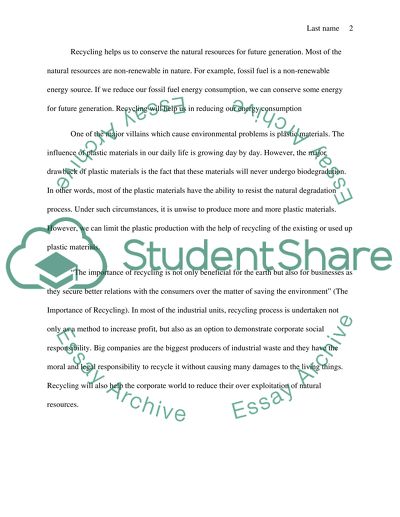 ﻿Nature is one of the most prominent waste producers. However, nature is able to recycle whatever the wastes produced by it so that waste accumulation may not take place on earth. Apart from nature, all the living things including human are producing huge amounts of wastes on earth. The major difference between the waste produced by human and other living things is the fact that majority of the human made wastes are not degrading naturally. The amount of human made wastes are accumulating on earth which means one day our earth may become a place of wastes rather than a place of living things. Waste management is thus gaining grounds in human life in general and in industrial world in particular. Reduce, Reuse and Recycle are three R’s of the principles of every waste management systems and among these three R’s, recycling seems to be the most vital one.
“Recycling involves the collection of used and discarded materials processing these materials and making them into new products. It reduces the amount of waste that is thrown into the community dustbins thereby making the environment cleaner and the air fresher”(Recycling and Reuse). One of the severe problems faced by human at present is the energy crisis. Most of the human activities need energy in one way or other. However, the energy sources are exhausting day by day while the need for energy increases rapidly. Under such circumstances, judicious energy consumption is necessary reduce future energy problems. “Recycling reduces energy consumption, since it generally takes less energy to recycle a product than to make a new one”(Recycling).
Recycling helps us to conserve the natural resources for future generation. Most of the natural resources are non-renewable in nature. For example, fossil fuel is a non-renewable energy source. If we reduce our fossil fuel energy consumption, we can conserve some energy for future generation. Recycling will help us in reducing our energy consumption
One of the major villains which cause environmental problems is plastic materials. The influence of plastic materials in our daily life is growing day by day. However, the major drawback of plastic materials is the fact that these materials will never undergo biodegradation. In other words, most of the plastic materials have the ability to resist the natural degradation process. Under such circumstances, it is unwise to produce more and more plastic materials. However, we can limit the plastic production with the help of recycling of the existing or used up plastic materials.
“The importance of recycling is not only beneficial for the earth but also for businesses as they secure better relations with the consumers over the matter of saving the environment” (The Importance of Recycling). In most of the industrial units, recycling process is undertaken not only as a method to increase profit, but also as an option to demonstrate corporate social responsibility. Big companies are the biggest producers of industrial waste and they have the moral and legal responsibility to recycle it without causing many damages to the living things. Recycling will also help the corporate world to reduce their over exploitation of natural resources.
To conclude, recycling is an activity which helps us to reduce our energy consumption and exploitation of natural resources. It also helps us to make the environment more safe and secure for living things.
Works Cited
1. “Recycling and Reuse”. Web. 12 May 2011.
2. “Recycling”. 2008. Web. 12 May 2011.
3. “The Importance of Recycling”. Web. 12 May 2011.
Read More
Share:
Tags
Cite this document
(“Recycling & Nature Essay Example | Topics and Well Written Essays - 500 words - 1”, n.d.)
Retrieved from https://studentshare.org/environmental-studies/1421777-environmental-science

CHECK THESE SAMPLES OF Recycling & Nature

Racial issues have been endemic and ingrained in all aspects of American life, first as custom, then as law and tradition. For at least a century of American his...

Augustine will commence. The moderator will be the one to facilitate the discussion for orderly and systematic flow.
Moderator: A pleasant day to all. We are gathered here today to witness the exchange of constructive arguments between two delegates. The first one on my right is a follower of the great political thinker, Aristotle. The one on my left is a passionate believer of St. Augustine. As we all know, Aristotle existed during the Ancient Period while St. Augustine lived in the Medieval Period. Both thinkers have been recognized as the great philosophers who have ever lived.
Before we begin the intellectual exchange of ideas and statements, I will brief you on what is the topic to be touched on. The situation is de...

Nature of Love in Madame Bovary

To start with Charles Bovary is portrayed to had a humble beginning but struggled against all odds to a second rate medical degree where he later became an Officier de santé in the department of the Public Health Service. He married Heloise Dubuc who was a rich widow and his mother’s choice, Charles decided to practice in a small village called Toste.
In this book, he defined love as an activity and an investment but not a feeling. He further claimed that love is an individual will to extend himself/herself with an intention of nurturing spiritual growth. Therefore, Peck concluded that love is all about activities geared towards nurturing one another’s spiritual growth. He further drew a distinction betwee...
7 Pages(1750 words)Literature review

The Nature and Significance of Listening Skills in Accounting Practice

In addition to facilitating success in the accounting profession, listening skills contribute to social adjustment and participation. The major topics covered by the researchers are communication skills, accounting education, listening and communication practices. According to the researchers, most institutions consider listening skills as generic skills (Stone & Lightbody, 2012, p. 375). Teachers in these institutions do not consider listening skills as important skills in accounting practice. Most universities place emphasis on technical skills. Surveys on the importance of listening skills have put pressure on universities to raise awareness of these skills (Ameen, Jackson & Malgwi, 2010, p. 34). The researchers b...
6 Pages(1500 words)Assignment
sponsored ads
Save Your Time for More Important Things
Let us write or edit the essay on your topic "Recycling & Nature" with a personal 20% discount.
GRAB THE BEST PAPER

Let us find you another Essay on topic Recycling & Nature for FREE!