Comments (0)
Add to wishlistDelete from wishlist
Cite this document
Summary
Coastal Processess: Assessment II Reducing Storm Surge Impacts in the UK through a Comprehensive Assessment of Storm Surge Risks in UK Coastal Cities [Research Proposal] Name of Student Course Tutor A Research Proposal Submitted to the National Hazards Research Centre (NHRC) Section II: Applicants Name of Student Student Number Section III: Aims of the Project With the view of attaining a complete analysis of past and potentially future storm surge impacts, the aims of the project will be to: Present statistical analysis of past storm surges within 3 identified UK coastal Cities Analyze geographical information of asset and the population exposure in the selected three citi…
Download full paperFile format: .doc, available for editing
HIDE THIS PAPERGRAB THE BEST PAPER93.7% of users find it useful 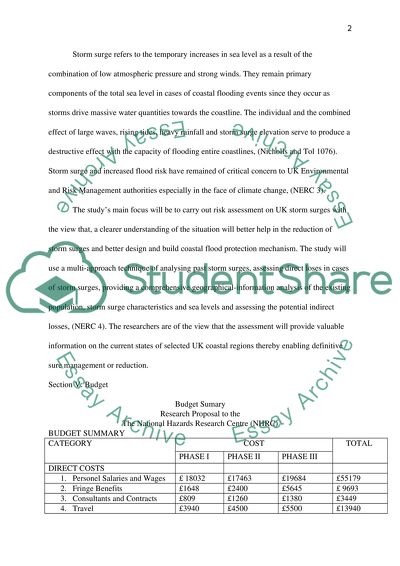 The term clinical governance gained importance following the high mortality rate for pediatric cardiac surgery at the Bristol Royal Infirmary. The incident led to the formation by the government in 1998 of the Kennedy Commission, which proved a turning point in overhauling the NHS (Kennedy, 2001). The commission’s final report recommended that change “can only be brought about with the willing...
11 Pages(2750 words)Term Paper
sponsored ads
Save Your Time for More Important Things
Let us write or edit the essay on your topic "Reducing storm surge impacts in the UK RESEARCH PROPOSAL" with a personal 20% discount.
GRAB THE BEST PAPER

Let us find you another Essay on topic Reducing storm surge impacts in the UK RESEARCH PROPOSAL for FREE!