Comments (1)
Add to wishlistDelete from wishlist
Cite this document
Summary
According to recent research, workers can utilize work time for health promoting measures or exercise and uphold the same productivity level or higher at the workplace. Workers who use two and a half hours per week being active physically are more contented with the quality and…
Download full paperFile format: .doc, available for editing
HIDE THIS PAPERGRAB THE BEST PAPER94.9% of users find it useful 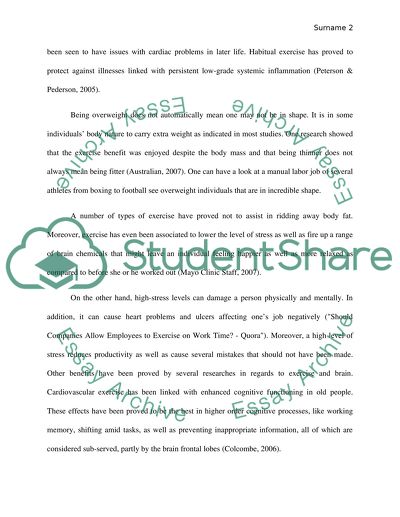 According to recent research, workers can utilize work time for health promoting measures or exercise and uphold the same productivity level or higher at the workplace. Workers who use two and a half hours per week being active physically are more contented with the quality and quantity of their work, report more work capability and take less sick time as compared to employees who do not take part in physical activity.
By use of work time for exercise, workers can also enhance their work-life balance since their workout time is not pressed into already busy family/personal time. Furthermore in a recent research, for workers who were more active physically, job burnout was less likely to develop into depression. In this research, the greatest benefits were attained by people who exercised hours weekly.
High levels of energy, as well as daily health, are just among the benefits that originate from exercise. Weight loss is an unbelievable outcome that has happened from exercise for some individuals. Increasing physical activity has been proved to burn more calories, which assists in breaking a weight loss plateau (Scott, 2008). Physical activity has not just proved to reduce obdurate body fat, but also to lower blood pressure levels, cholesterol, as well as reduce the risks of diabetes and cancer (Hellmich, 2008). This enables an individual to live healthier and longer just with some exercise. According to Hellmich (2007), exercising can as well suppress appetite suppressant since it leaves an individual feeling less hungry. Some overweight individuals have been seen to have issues with cardiac problems in later life. Habitual exercise has proved to protect against illnesses linked with persistent low-grade systemic inflammation (Peterson & Pederson, 2005).
Being overweight does not automatically mean one may not be in shape. It is in some individuals’ body nature to carry extra weight as indicated in most studies. One research showed that the exercise benefit was enjoyed despite the body mass and that being thinner does not always mean being fitter (Australian, 2007). One can have a look at a manual labor job of several athletes from boxing to football see overweight individuals that are in incredible shape.
A number of types of exercise have proved not to assist in ridding away body fat. Moreover, exercise has even been associated to lower the level of stress as well as fire up a range of brain chemicals that might leave an individual feeling happier as well as more relaxed as compared to before she or he worked out (Mayo Clinic Staff, 2007).
On the other hand, high-stress levels can damage a person physically and mentally. In addition, it can cause heart problems and ulcers affecting one’s job negatively ("Should Companies Allow Employees to Exercise on Work Time? - Quora"). Moreover, a high level of stress reduces productivity as well as cause several mistakes that should not have been made. Other benefits have been proved by several researches in regards to exercise and brain. Cardiovascular exercise has been linked with enhanced cognitive functioning in old people. These effects have been proved to be the best in higher order cognitive processes, like working memory, shifting amid tasks, as well as preventing inappropriate information, all of which are considered sub-served, partly by the brain frontal lobes (Colcombe, 2006).
Works Cited
"Should Companies Allow Employees to Exercise on Work Time? - Quora." Quora - The Best Answer to Any Question. N.p., n.d. Web. 16 Apr. 2015. Read More
Share:
Tags
Cite this document
(“Should Companies Allow Employees to Exercise on Work Time Coursework”, n.d.)
Retrieved de https://studentshare.org/english/1688964-should-companies-allow-employees-to-exercise-on-work-time

“Should Companies Allow Employees to Exercise on Work Time Coursework”, n.d. https://studentshare.org/english/1688964-should-companies-allow-employees-to-exercise-on-work-time.
Comments (1)
Click to create a comment or rate a document

ni
nikki72 added comment 1 year ago
Student rated this paper as
I never thought 500 words essay could be written in such a free manner. I loved the research of this essay. Will definitely use it for my own work!

... employees by doing more than just providing monetary compensation. There attempt was to make employees feel more involved in the production process to increase their interest in the output. Toyota then made quality assurance everyone's obligation by allowing any employee to stop the line if an aspect of it was not working well (Liker, 2004). There is nothing as inviting to workers as the perception that their input is not only valued but encouraged. When they are encouraged and enabled to have discussions about the output options and time lines, while have control over their own work life, the company is creating a work environment that that is conducive to worker satisfaction (Liker, 2004). General Electric GE indicates that its primary...
10 Pages(2500 words)Research Paper

..., and workplaces with fewer than ten employees; moreover, evidence from United Kingdom Labor Force Surveys supports this suggestion. Thus lower part-time rates reported by the survey establishments reflect the actual situation in different parts of the economy. None the less, it should be borne in mind that the findings presented here relate only to private sector part-time employment, which, arguably, may provide the fewest advantages for women (Boje and Leira, 2000). The focus of the surveys was the establishment rather than the individual employee. Thus, the study examines the experience of part-time work for women in an indirect way. That is, the experiences of individuals employed in part-time jobs cannot be analyzed directly because...
14 Pages(3500 words)Essay

Best Companies to work for

The company that I have selected, DreamWorks Animation SKG, is ranked 10th on Fortune Magazine’s “100 Best Companies to Work For.” The appeal of DreamWorks as among the top companies is quite apparent, the repertoire of its achievements is known to virtually everyone regardless of age whether it be the old or the young. The company has elevated the level of animation as to draw audiences of all ages with its closest rival being no less than ‘Finding Nemo’ creator Pixar Animation. DreamWorks is the brains behind successful animation franchises such as ‘Shrek,’ ‘Madagascar’ and ‘Kung Fu Panda,’ including other popular animated films like ‘Shark Tale’ and ‘Chicken Run’ to name a few.
DreamWorks Animation SKG did a great job of co...
2 Pages(500 words)Essay

Best companies to work for

Additionally, the company also engages in advertising services, operating systems provisions hardware and enterprise product selling. People think of Google as the number one search company on the internet; it acquired that reputation by helping people find the right thing, summarizing it, and allowing them to go deeper. The company has an auction-based system of running ad words where the number of click-throughs generates revenues for users and itself. Furthermore, Google has an open source software platform; this relies on the Android system and enables users to apply it in various elements of service. It also has a range of products for business enterprises as well as a mobile segment of wireless services.
Zappos is an int...
9 Pages(2250 words)Essay

... Companies Monitoring Employees Computer Usage According to Anandarajan and Simmers, "Most large organizations that are providing internet access to their employees are also providing some means to monitor and control that usage" (142). It is not uncommon to find employees surfing the internet particularly using the social media during company time. It is important to note that the main objective of technology in the workplace is to increase productivity through enhancing efficiency (Anandarajan and Simmers 143). However, if technology is misused, productivity can negatively be affected. To prevent incidences of employees misusing company time surfing the internet, action plans have been introduced in many organizations to help identify...
1 Pages(250 words)Essay

Pressures on employees at work

...PRESSURES ON EMPLOYEES AT WORK by Introduction Company managers and bosses are supposed to embark on a risk evaluation exercise for potential health risks in places of work, as well as stress, and are further required to take appropriate action to alleviate the associated risk. Nonetheless, for most individuals, stress is an immeasurable element, difficult to ascertain the level of severity. The Health Survey for England has in the past tried to address the issues related to stress by formulating management standards to assist managers assess their performance in evaluating the main causing reasons of stress at the workplace and recognize regions for development. The designed guidelines touch on the numerous and diverse demands made...
11 Pages(2750 words)Essay

...Complete Exercise 18 in Statistics for Health Care Research: A Practical Workbook. al Affiliation In order to receive full credit on calculated answers, please show your work. (Use Words equation editors, etc., and/or provide a short written description as to how you obtained the final result.) 8 Questions to be graded 1. Assuming that the distribution is normal for weight relative to the ideal and 99% of the male participants Scored between (–53.68, 64.64), where did 95% of the values for weight relative to the ideal lie? Round your answer to two decimal places. The z-score corresponding to 95% is 1.96 X=5.48, sd = 22.93 The answer is ( 2. Which of the following values from Table 1 tells us about variability of the scores... Exercise 18 in...
1 Pages(250 words)Assignment

Should Companies Allow Employees To Exercise On Work Time

... Should Companies Allow Employees To Exercise On Work Time? Introduction Employees who exercise during work days are normally more productive and happier plus they endure less stress compare to employees who that are basically non-gymnastics type (CDC 1). Researchers have uncovered that workers who freely take part in exercise during, before and even after work are more prepared to deal with whatever the day throws at them (ACE Fit 1). The research also uncovered that an individual’s general mood improves on days that he or she exercises, but they more moody on days that they have not undertaken any exercise (ACE Fit 1). On exercise days, workers’ mood considerably improved following an exercising session; however, their mood deteriorated...
10 Pages(2500 words)Case Study
sponsored ads
Save Your Time for More Important Things
Let us write or edit the coursework on your topic "Should Companies Allow Employees to Exercise on Work Time" with a personal 20% discount.
GRAB THE BEST PAPER

Let us find you another Coursework on topic Should Companies Allow Employees to Exercise on Work Time for FREE!