Comments (0)
Add to wishlistDelete from wishlist
Cite this document
Summary
On the other hand, International terrorism involves extremism against the territory or the citizens of more than one country. Notably, the 11…
Download full paperFile format: .doc, available for editing
HIDE THIS PAPERGRAB THE BEST PAPER95.8% of users find it useful 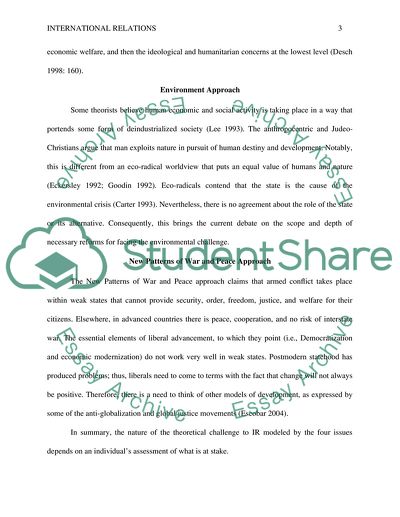 Extract of sample "Summary of a book chapter"

Critical Issues in Contemporary International Relations Critical Issues in Contemporary International Relations Terrorism refers to unlawful or threatened use of violence against citizens to achieve political, religious or related objectives. On the other hand, International terrorism involves extremism against the territory or the citizens of more than one country. Notably, the 11 September 2001 attacks in New York, Washington, and later attacks in other places exhibit this issue. Several approaches provide useful insights towards the analysis of international terrorism. Specifically, these are religious, environmental, and New Patterns of War and Peace.
Religious Approach
Many scholars believe that the events of 11 September 2001 reflect a ‘revival of religion’ in international affairs. Precisely, this means that there is a ‘rising importance of religious beliefs, practices, and discourses in life,’ which has signiﬁcant inferences for international relations (Thomas 2005: 26).
Religion and politics are profoundly intertwined in the ancient days, unlike the modern world where these elements stand as independent entities. Medieval authority spread among a chain of command of religious and political rulers. When the Thirty Years War in Europe (1618–48) was over, a new modern era presaged the liberation of European leaders from the religious–political authority of Christendom. Power and authority became concentrated at one point. Although religious beliefs were disgorged from the political life, religion still inﬂuences the political agenda in many countries.
Policy and issues approach seeks to prove that in an anarchist world ‘states have a hierarchy of interests. Specifically, the pattern occurs with security at the top, followed by economic welfare, and then the ideological and humanitarian concerns at the lowest level (Desch 1998: 160).
Environment Approach
Some theorists believe human economic and social activity is taking place in a way that portends some form of deindustrialized society (Lee 1993). The anthropocentric and Judeo-Christians argue that man exploits nature in pursuit of human destiny and development. Notably, this is different from an eco-radical worldview that puts an equal value of humans and nature (Eckersley 1992; Goodin 1992). Eco-radicals contend that the state is the cause of the environmental crisis (Carter 1993). Nevertheless, there is no agreement about the role of the state or its alternative. Consequently, this brings the current debate on the scope and depth of necessary reforms for facing the environmental challenge.
New Patterns of War and Peace Approach
The New Patterns of War and Peace approach claims that armed conﬂict takes place within weak states that cannot provide security, order, freedom, justice, and welfare for their citizens. Elsewhere, in advanced countries there is peace, cooperation, and no risk of interstate war. The essential elements of liberal advancement, to which they point (i.e., Democratization and economic modernization) do not work very well in weak states. Postmodern statehood has produced problems; thus, liberals need to come to terms with the fact that change will not always be positive. Therefore, there is a need to think of other models of development, as expressed by some of the anti-globalization and global justice movements (Escobar 2004).
In summary, the nature of the theoretical challenge to IR modeled by the four issues depends on an individual’s assessment of what is at stake. Read More
Share:
Tags
Cite this document
(“Summary of a book chapter Assignment Example | Topics and Well Written Essays - 500 words - 8”, n.d.)
Summary of a book chapter Assignment Example | Topics and Well Written Essays - 500 words - 8. Retrieved from https://studentshare.org/english/1686564-summary-of-a-book-chapter

CHECK THESE SAMPLES OF Summary of a book chapter

Summary and criticism of book chapter

...?Summary of Chapter 6: THE DECLINE AND FALL OF THE HABSBURG EMPIRE A lot of European history are of the view that the Habsburg Monarchy was already on the verge of collapsing between the years 1867 and 1914. The First World War merely served to exacerbate the situation. Everyone who was a part of the Monarchy was seeking a republic at this time, and they were averse to see the Monarchy collapse. The most vehement dissidents were the German nationalists, led by von Schonar, who wanted Austria’s Germans to secede and amalgamate with the German Empire of the Hohenzoclners. Defeat in the war led to the break-up of the Monarchy, and this was unforeseen even until the summer of 1918 (Sked, 1989 ). The Habsurg...
12 Pages(3000 words)Essay

Summary of a chapter of book

...Full Literacy in Virtual Worlds With the increasing developments of technology, people now live not only in a real worldbut also on a virtual world. Studies show that most adolescents are spending more time on the internet nowadays, playing online games and developing virtual relationships with more people than they can make in the real world. Twitter and Facebook are just among the most visited sites not just for adults but also for adolescents, creating various problems especially for the latter who are expected to spend their time wisely on books and school. However, the effects of this high technological generation are not all that bad. It has been found out that adolescents learn better about the world around them,...
1 Pages(250 words)Essay

Book chapter 3 and 4 writing summary - Privilege: The Making of an Adolescent Elite at St. Paul's School

...Chapter 3: The Ease of Privilege Is privilege culturally acquired or learned? How do we know an elite status has been achieved or not? These are some of the questions that Shamus Khan is trying to answer in this chapter of his book privilege: The Making of an Adolescent Elite at St. Paul’s School. Khan argues that cultural knowledge or past experiences do not matter in the achievement of elite status which is signified by corporeal ease. Instead, it is the experience gained through the learning process that matters. For Khan “ease is not inherited from family experience; but school interactions” (p. 83). It does not matter whether a student comes from a wealthy and privileged background....
2 Pages(500 words)Book Report/Review

...I Am Because We Are Chapter XXXIV of “I am Weak Because We Are” by Kristen Ashburn highlights the concept of empowerment of Afro-American women. During the 80’s the society develops economic and political strategies to empower women in the communities. Black women in the 19th century have been able to organize club movements such as the General Federation of Women’s Clubs that campaigns for the rights of the middle-class white women and a hundred black women representing Ten American States. The club held their meeting at Boston to deliberate on a national women club movement. Josephine St. Pierre Ruffin led the Black women in the call for a national club movement that articulates their issues in political life. The...
2 Pages(500 words)Essay

...Summary Chapter 4 Summary Chapter 4 The of Chapter 4 is “Criminal or Crusaders?” and in this chapter the describes different kinds of terrorists and the terrorists that are operational in the 21st century. The author divides terrorists into three types including the criminals who operate in order to gain personal benefits and are ready to negotiate and they fear death (Combs, 2012, p.55). The second types are crusaders who operate due to a higher religious cause and do not negotiate and have no fear of death. The third types are regarded as crazy who terrorize others for personal gains but their motives are hard to identify and this makes...
2 Pages(500 words)Assignment

...Summary of a Book Chapter Summary of a Book Chapter The presentation provided in this chapter focuses on three crucial debates of the International Political Economy (IPE). The first debate concerns the existing relationship between economics and politics. The second debate is on the development and underdevelopment regarding the developing nations. Finally, the last debate concerns nature as well as the extent of economic globalization. The concern with the relationship between economics and politics debates on the US hegemonic stability. It is essential to point that the debate concerns the need to establish a liberal...
2 Pages(500 words)Assignment

...Alliances al Affiliation) The John Duffield, analyzes the concept and theories of alliances. He focuses majorlyon the issue of persistence and collapse of alliances. According to the author, alliances are the most important aspects of global politics and security studies, for decades, both great nations and small nations have known the importance of forming alliances. The author argues that alliance diplomacy is a key component of a country’s external policies. The reason is that alliances are one of the most significant mechanisms for advancing the interest of a country. A small nation facing external threats relies on alliances to overcome such security issues (Duffield, 1992). According to the author, alliances have been... al...
2 Pages(500 words)Assignment

...TERRORIST TRAINING Terrorist Training Terrorism has been one of the major global security threats in the world today. Many of these terror attacks have been linked to Islamic extremist groups with a network all over the world where recruitment, funding and training take place. The willingness of the individuals from different backgrounds to support and perpetuate the terror attacks has raised many concerns over the years about their funding, training and even the end benefits. The attacks of September 11, 2001 in the American world Trade Centre triggered such question as to how these terrorists are trained to be able to pull such an attack. The terrorists undergo various training that are well discussed in this chapter....
2 Pages(500 words)Assignment
sponsored ads
Save Your Time for More Important Things
Let us write or edit the assignment on your topic "Summary of a book chapter" with a personal 20% discount.
GRAB THE BEST PAPER

Let us find you another Assignment on topic Summary of a book chapter for FREE!