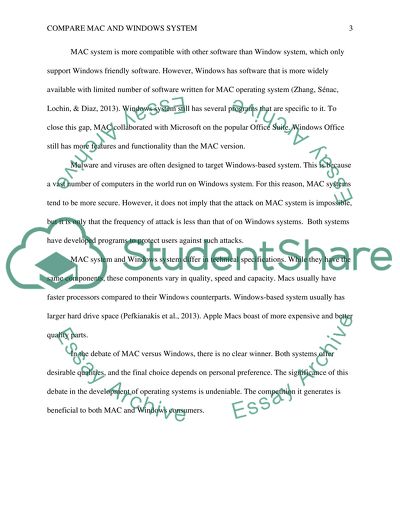 Compare Mac and Windows System Compare Mac and Windows System The most widely used graphical user interface-based operating systemson desktop computers include MAC and Windows. Microsoft and Apple Inc. develop Macintosh (MAC) and Windows operating systems respectively. While Windows are developed for any personal computer, Apple develops MAC for their line of personal computers. These systems have been put up against each other over decades, and the debate seems destined to be eternal.
Cost is key among the cited difference between MAC and Windows systems. Windows based computers tend to be cheaper than MAC computer. Hence, they dominate the market. The cost difference is mainly because of the hardware running on these operating systems (Junior & Kumar, 2014). Apple has exclusive rights to the hardware produced that run on the MAC operating system. On the other hand, Windows-based system has third party developers. Therefore, unlike MAC system where there is only one manufacturer, competition is often low. On the contrary, in Windows system, there are a number of competitors, which results in lower prices.
Design is another big difference between Apple MAC systems and Microsoft Windows system. In this aspect, MAC products tend to be superior. The unconventional focus on design by the former Apple CEO Steve Jobs explains this. Manufacturers of Windows based hardware often attempt to create more design-oriented models to compete with Apple products with none yet to achieve the popular acclaim commanded by MAC products (Oh & Moon, 2012).However, Windows based systems have the advantage of having a variety of designs. Consumers have a variety of design options on account of the fact that the Windows based systems have thousands of manufacturers. With MAC products, consumers are limited to Apple’s design.
MAC system is more compatible with other software than Window system, which only support Windows friendly software. However, Windows has software that is more widely available with limited number of software written for MAC operating system (Zhang, Sénac, Lochin, & Diaz, 2013). Windows system still has several programs that are specific to it. To close this gap, MAC collaborated with Microsoft on the popular Office Suite. Windows Office still has more features and functionality than the MAC version.
Malware and viruses are often designed to target Windows-based system. This is because a vast number of computers in the world run on Windows system. For this reason, MAC systems tend to be more secure. However, it does not imply that the attack on MAC system is impossible, but it is only that the frequency of attack is less than that of on Windows systems. Both systems have developed programs to protect users against such attacks.
MAC system and Windows system differ in technical specifications. While they have the same components, these components vary in quality, speed and capacity. Macs usually have faster processors compared to their Windows counterparts. Windows-based system usually has larger hard drive space (Pefkianakis et al., 2013). Apple Macs boast of more expensive and better quality parts.
In the debate of MAC versus Windows, there is no clear winner. Both systems offer desirable qualities, and the final choice depends on personal preference. The significance of this debate in the development of operating systems is undeniable. The competition it generates is beneficial to both MAC and Windows consumers.
References
Junior, R. B., & Kumar, S. (2014). Apple’s Lion vs Microsoft’s Windows 7: Comparing Built-In Protection against ICMP Flood Attacks. Journal of Information Security, 5(3), 124–135.
Oh, J., & Moon, N. (2012). User-selectable interactive recommendation system in mobile environment. Multimedia Tools and Applications, 57(2), 295–313. http://doi.org/http://dx.doi.org/10.1007/s11042-011-0737-x
Pefkianakis, I., Hu, Y., Lee, S., Peng, C., Sakellaridi, S., & Lu, S. (2013). Window-based Rate Adaptation in 802.11n Wireless Networks. Mobile Networks and Applications, 18(1), 156–169. http://doi.org/http://dx.doi.org/10.1007/s11036-011-0347-x
Zhang, L., Sénac, P., Lochin, E., & Diaz, M. (2013). A cross-layer architecture to improve mobile host rate performance and to solve unfairness problem in WLANs. Telecommunication Systems, 53(3), 343–356. http://doi.org/http://dx.doi.org/10.1007/s11235-013-9702-5 Read More
Share:
Tags
Cite this document
(“Compare Mac and Windows System Essay Example | Topics and Well Written Essays - 500 words”, n.d.)
Compare Mac and Windows System Essay Example | Topics and Well Written Essays - 500 words. Retrieved from https://studentshare.org/english/1685493-compare-mac-and-windows-system

CHECK THESE SAMPLES OF Compare Mac and Windows System

...?Computer sciences and Information technology Comparison between Windows 7 and Mac OS X (10.7 Lion) This is a comparison of two major operating systems, namely Microsoft's Windows and Apple's Mac OS in their current iterations, i.e. Windows 7 and Mac OS 10.7. Both are popular although Windows is dominant, but there are quite a few differences between the two systems, many of which can be traced to their origins, usability and their functions. After a brief overview of the history of the two operating systems and mentioning key differences (see also the table below), both...
5 Pages(1250 words)Essay

...Microsoft Windows Operating System Microsoft Windows is a family of operating systems by Microsoft for use basically on personal computers, but it has been successfully proved since the first version of Windows that they can run on several types of platforms such as servers and embedded devices. First introduced in November 1985 as an add-on to MS-DOS, this operating system has grown from strength to strength having different variants till Windows XP and XP-Pro. Now the world is waiting for Windows Vista which is to be launched by January, 2007. Business economics tell us that a perfectly competitive market has the following characteristics: There are many buyers and sellers in the market. The goods offered by the various sellers... are...
2 Pages(500 words)Essay

...Windows File System Comparison Operating systems follow a certain structure on how files are organized, d and stored. This structure is known asthe file system. By definition, a file system is a method for storing and organizing computer files and the data they contain to make it easy to find and access them. File systems may use a storage device such as a hard disk or CD-ROM and involve maintaining the physical location of the files, or they may seem virtual and exist only as an access method for virtual data or for data over a network. In this paper, only the different file systems being used by windows will be discussed. The two main categories of file systems used by different Microsoft Windows operating systems are the File... ...
3 Pages(750 words)Assignment

...1. Introduction Windows has evolved from a program consisting of 4000 line of s of an assembly language that ran in 8 Kbytes of memory using then Intel 8086 microprocessor to a more complex and robust type of a computer system which runs most of today's computers. In 2000, Microsoft released its new version of the windows called Windows 2000, which are offered to both home PC and professional workstation versions. Its operating system architecture is a hybrid architecture which composed of client/server, layered, object-oriented, and symmetric multiprocessing architecture principles. Windows 2000 borrows from the features of...
9 Pages(2250 words)Essay

..., from a productivity standpoint, than Mac Pro. But this is too early to say which one have better performance as Vista is in early stages. After comparisons, it can be said that in most scenarios, Windows Vista is currently jump out all over Mac OS X Tiger. Microsoft has considerably improved its product as compared to previous versions. Microsoft should be applauded for taking so many modern operating system concepts and dragging them front and center in Vista. Vista is currently in its infancy and is still not out on security and ease-of-use over time. Nevertheless, for simplicity and quality of the bundled software, Mac OS X comes...
4 Pages(1000 words)Essay

...on the comparison between the Windows and Mac OS and also relies on some firsthand observations that have been made by experts who have compared these two operating systems. The point of comparison is in terms of the factors listed above and I have referred extensively to the available information as far as comparison of these factors is concerned. The project methods that have been used to gather information include interviews, review of studies and published material from reputed trade and academic journals and the forums discussing the relative merits and demerits of these two operating systems. My qualifications for doing a comparison between...
13 Pages(3250 words)Research Paper

..., 2011) That being said, Mac, UNIX/Linux machines also use these ports, due to a Windows-file-sharing-compatibility package called Samba. Another vulnerability we are introducing is the Abusing remote Desktop Protocol (RDP). Remote Desktop Protocol (RDP) is a protocol developed by Microsoft, which provides a user with a graphical interface to connect to another computer over a network connection. This enhancement can be a threat when it allows an authorized remote user to connect to the operating system. Connection is usually secured by a username and pass. Therefore, it all depends on the strength of the password. Since this works on port 3389, this is easily found by port scanning. ...
2 Pages(500 words)Essay

4 Pages(1000 words)Essay
sponsored ads
Save Your Time for More Important Things
Let us write or edit the essay on your topic "Compare Mac and Windows System" with a personal 20% discount.
GRAB THE BEST PAPER

Let us find you another Essay on topic Compare Mac and Windows System for FREE!