ControversyCollege dorm can have any pets - Annotated Bibliography Example

Comments (0)
Add to wishlist Delete from wishlist
Cite this document
Summary
The article addresses students considering to have dogs in college. The reporter cites financial and lifestyle considerations as critical deterrents. However, the article counteracts this…
Download full paper File format: .doc, available for editing
HIDE THIS PAPERGRAB THE BEST PAPER96.1% of users find it useful 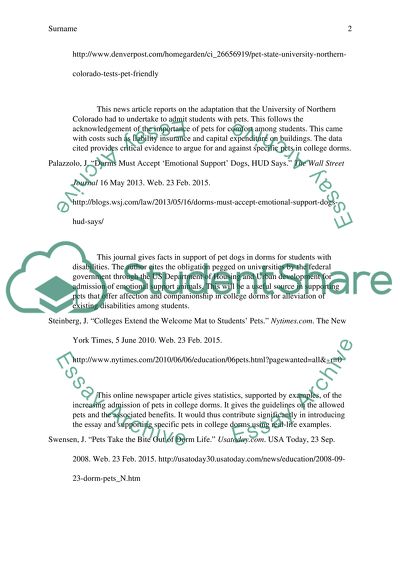 Extract of sample "ControversyCollege dorm can have any pets"

College Dorms can Have Any Pets? An Annotated Bibliography Driscoll, E. “Should You Get a Dog in College?” Foxbusiness.com. Fox Business, 13 Apr. 2013. Web. 23 Feb. 2015. http://www.foxbusiness.com/personal-finance/2012/04/13/should-get-dog-in-college/
This online business news article debates on whether students should have dogs in colleges. The article addresses students considering to have dogs in college. The reporter cites financial and lifestyle considerations as critical deterrents. However, the article counteracts this argument noting that local animal shelters and community involvement as solutions. It is therefore a useful source to argue against dogs in colleges, with quantitative facts, but also for giving credible counterargument.
Eckerd College. “Pet Policy.” Eckerd.edu. Eckerd College, 2015. Web. 23 Feb. 2015. http://www.eckerd.edu/housing/petlife/petpolicy.php
This institutional website gives the guidelines on the pets allowed in the dorms of the college. It appreciates the importance of pets in dorms for some students, describing the adaptation Eckerd College had to make to admit students’ pets. It will contribute to the development of the introduction, particularly describing the types of pets allowed in institutions and in arguing against pets in dorms due to associated lifestyle adaptations.
Gahagan, K. “Pet State: University of Northern Colorado Tests Pet-Friendly Dorm.” Denverpost.com. The Denver Post, 10 Mar. 2014. Web. 23 Feb. 2015. http://www.denverpost.com/homegarden/ci_26656919/pet-state-university-northern-colorado-tests-pet-friendly
This news article reports on the adaptation that the University of Northern Colorado had to undertake to admit students with pets. This follows the acknowledgement of the importance of pets for comfort among students. This came with costs such as liability insurance and capital expenditure on buildings. The data cited provides critical evidence to argue for and against specific pets in college dorms.
Palazzolo, J. “Dorms Must Accept ‘Emotional Support’ Dogs, HUD Says.” The Wall Street Journal 16 May 2013. Web. 23 Feb. 2015. http://blogs.wsj.com/law/2013/05/16/dorms-must-accept-emotional-support-dogs-hud-says/
This journal gives facts in support of pet dogs in dorms for students with disabilities. The author cites the obligation pegged on universities by the federal government through the US Department of Housing and Urban development for admission of emotional support animals. This will be a useful source in supporting pets that offer affection and companionship in college dorms for alleviation of existing disabilities among students.
Steinberg, J. “Colleges Extend the Welcome Mat to Students’ Pets.” Nytimes.com. The New York Times, 5 June 2010. Web. 23 Feb. 2015. http://www.nytimes.com/2010/06/06/education/06pets.html?pagewanted=all&_r=0
This online newspaper article gives statistics, supported by examples, of the increasing admission of pets in college dorms. It gives the guidelines on the allowed pets and the associated benefits. It would thus contribute significantly in introducing the essay and supporting specific pets in college dorms using real-life examples.
Swensen, J. “Pets Take the Bite Out of Dorm Life.” Usatoday.com. USA Today, 23 Sep. 2008. Web. 23 Feb. 2015. http://usatoday30.usatoday.com/news/education/2008-09-23-dorm-pets_N.htm
This online news article gives a story of a college student keeping a dog in the dorm. The article narrates how the dog was adaptable and cheerful and respected other dorm students and further educates on the benefits of allowing pets in college dorms. It thus provides a source of example on the benefits and feasibility of having specific pets in college dorms. Read More
Share:
Tags
Cite this document
(“ControversyCollege dorm can have any pets Annotated Bibliography”, n.d.)
Retrieved from https://studentshare.org/english/1679338-controversycollege-dorm-can-have-any-pets

“ControversyCollege Dorm Can Have Any Pets Annotated Bibliography”, n.d. https://studentshare.org/english/1679338-controversycollege-dorm-can-have-any-pets.
Comments (0)
Click to create a comment or rate a document

CHECK THESE SAMPLES OF ControversyCollege dorm can have any pets

Although the United States government has put strict measures to prevent animals from being exposed to cruelty, these acts are still being perpetrated. The same research goes on to point out that 48% of the dogs and 30% of the cats found abandoned were of between 3months to three years. This shows how innocent and young pets are exposed to harsh weather and uncomfortable environment. The pets are supposed to be taken care off because they are of importance to human beings. Importance of pets Pets are a source of happiness for many American families. Apart from being companions of families and people leaving alone, they provide a source of happiness to the pet owners. Their playful nature is essential to the exercise of kids. In s...
10 Pages (2500 words) Research Paper

... Geckos as Pets - Contrast and Comparison to Traditional Pets Pets serve many needs for humans - from teaching responsibility to a young child to keeping a single adult company to just plain being a source of entertainment. Most people, when thinking of what type of pet to get, will normally think in terms of traditional animals such as dogs and cats, maybe birds or even small rodents. Reptiles, on the other hand, are less popular but just as entertaining when kept as pets. Leopard and Crested Geckoes, in particular, are superior pets as they require little maintenance, inexpensive food, minimal commitment as far as time and space, and minimal attention as compared to dogs and cats. In making the decision to purchase any kind of pet...
4 Pages (1000 words) Assignment

...The Case Study of Neo Pets Outline: This paper is a case study on Neopets. In this case study some important questions and answers, which may help inthe growth of the neopets gaming solution are discussed. It was started by two college students, namely, Adam Powell and Donna Williams in the year 1997 and they launched the neopets website in the year 1999. Later a market research company namely Dohring, Inc. bought the concept from them. (Neopets, 2009). The case Study Neo: Answer to Question 1: In the past, we’ve seen many types of children’s products, ranging from Ninja turtles to Hula Hoops that have turned out to be fads. How do you think NeoPets can prevent its concept from becoming a fad? Most of the children’s products will last...
5 Pages (1250 words) Case Study

Pets personality and their owners

... to avoid arguments. Considering individual pet species, there is a variation in personality between various members of a species. Since the variation is mostly observed in different breeds, dogs stand out as the most appropriate species to be considered. Cottam & Zelin (2003) considers dogs as having six different types of personalities. The aggressive personality characterizes dogs with dominant behavior and that are easily provoked into biting. Such a dog’s dominant nature makes it resistant to human leadership. Such dogs need a training program that is rigorous and consistent. Their owners should be active with preference for intensive outdoor activities. A dog with the confident personality is self-assured and dominant. It can also...
6 Pages (1500 words) Term Paper

Pets and health and lifestyle

Pets and Health and Lifestyle Pets and Health and Lifestyle Pets have a positive impact on the lifestyle and health of an individual. They not only serve as companions but also act as mood alleviators and assist in overcoming anxiety. People become so attached to their pets that they treat them as family members and do not wish to part from them. This strong bond has led to investigations which have proved that pet ownership provides for enhancement in the quality of life of individuals. Not only is it associated with improvements in physical and mental health but it also assists in the social wellbeing of an individual (Fetters 2014). The social impact of pet ownership will first be discussed followed by its positive effects on t...
2 Pages (500 words) Speech or Presentation

Living in the dorm is noisy

... they are really not yet that good in playing musical instruments, they produce more of a noise than music which is a distraction to people studying. There are also loud people in the dorm who cannot seem to keep their peace making the entire dormitory a noisy place. Finally, the most annoying noise in the dormitory is loud music particularly those genre in rock and roll music that sounds like the devil yelling with such a loud base that it could almost make the whole structure to collapse. This noise does not only bothers other students who wanted to have serenity in the dorm so they can study but also an assault to their senses especially if those students are not into loud music such as rock and roll....
1 Pages (250 words) Essay

... social interaction. Pets offer the much needed companion to the elderly who in most cases, lacks enough social interaction. Some pets have been approved as special therapy animals, especially dogs so that they are used for visiting confined people (Person 21). Pet therapy has been designed so that the animals used aids in achieving certain social, physical, emotional and cognitive goals among patients. Despite these perceived benefits, several; instances have been reported over incidences where pets are abandoned by their guardians for various reasons. This paper examines some of the reasons why pets are often abandoned and some of the ways in which they can be saved and assisted to live their lives effectively after such incidences...
4 Pages (1000 words) Essay

..., and debugging tools address only the implementation discipline of the Unified Process (Systems Architecture Sixth Edition Chapter 10). In conclusion, the summary of the PowerPoint slides is divided into Software development process, Programming languages, Compilation and link editing, Interpretation, Symbolic debugging and Application development tools for easier understanding. They are the important aspects I have thoroughly explored and understood. Works Cited Systems Architecture Sixth Edition Chapter 10. Cengage Learning. PowerPoint Slides. 2015.... Summary The software development process/lifecycle is the process of building a good software product of high quality, accurate and correct. In the application development process, the user...
1 Pages (250 words) Coursework

... Importance of keeping pets It is quite interesting how human beings are able to coexist and share a home with animals; several reasons strongly support the human-pet relationship. It is easier to ignore the role played by pets in any family as long as we consider them mere animals which are incapable of speaking, working and probably a possible health threat (Walsh, 2009page 487). Differently, diverse logical reasons motivate almost every household to keep a pet. The benefits spread across from social issues to health significance. Every person in the family equally benefits from the presence of a pet in the house, not just children but also the aged people have their portion too. This is why so many people today have appreciated...
7 Pages (1750 words) Essay
sponsored ads
Save Your Time for More Important Things
Let us write or edit the annotated bibliography on your topic "ControversyCollege dorm can have any pets" with a personal 20% discount.
GRAB THE BEST PAPER

Let us find you another Annotated Bibliography on topic ControversyCollege dorm can have any pets for FREE!