Comments (0)
Add to wishlistDelete from wishlist
Cite this document
Summary
Giving form to something abstract (such as an idea, feeling, experience and/or speculation) is an innate characteristic of human beings (Clugston, 2010). Human mind is wired in such a way that an imaginary world exists in every one’s cognition. Literature is a person’s…
Download full paperFile format: .doc, available for editing
HIDE THIS PAPERGRAB THE BEST PAPER92.6% of users find it useful 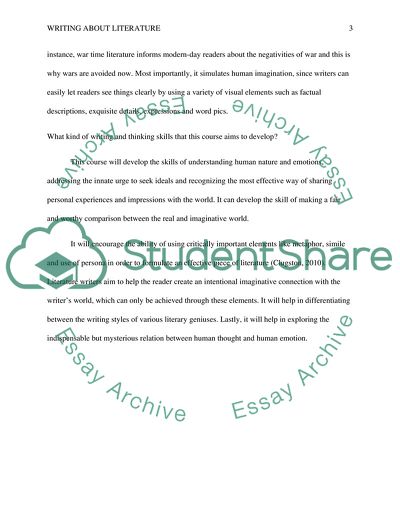 Extract of sample "Writing about Literature"

Writing about Literature Writing about Literature What compels a to write on literature? Giving form to something abstract (such as an idea, feeling, experience and/or speculation) is an innate characteristic of human beings (Clugston, 2010). Human mind is wired in such a way that an imaginary world exists in every one’s cognition. Literature is a person’s attempt to explore that world and connect it with the physical world.
Since ancient times, humans have been compelled towards story-telling, creating myths, sharing experiences, addressing social issues and exploring human emotions. Literature can be termed as the evolved form of story-telling, which humans have always been interested in.
How does it benefit us personally and/or professionally?
It allows exploration of diverse innate capabilities of an individual such as to sympathize, investigate, laugh, learn/absorb and wonder (Clugston, 2010). It lets a person reflect on the importance of life’s common human experiences by highlighting common place practices and recognizing shared human interests and emotions. It helps in linking feeling to thinking and safeguarding a vision of the ideal, thus, enabling a connection between intellect and imagination (Clugston, 2010).
It restores the past and serves as compendium of history since writers usually incorporate the traditions, norms, societal conditions and complexities of their society in their writings (Clugston, 2010). This helps future generations to realize the kind of situations that existed. For instance, war time literature informs modern-day readers about the negativities of war and this is why wars are avoided now. Most importantly, it simulates human imagination, since writers can easily let readers see things clearly by using a variety of visual elements such as factual descriptions, exquisite details, expressions and word pics.
What kind of writing and thinking skills that this course aims to develop?
This course will develop the skills of understanding human nature and emotions, addressing the innate urge to seek ideals and recognizing the most effective way of sharing personal experiences and impressions with the world. It can develop the skill of making a fair and worthy comparison between the real and imaginative world.
It will encourage the ability of using critically important elements like metaphor, simile and use of persona in order to formulate an effective piece of literature (Clugston, 2010). Literature writers aim to help the reader create an intentional imaginative connection with the writer’s world, which can only be achieved through these elements. It will help in differentiating between the writing styles of various literary geniuses. Lastly, it will help in exploring the indispensable but mysterious relation between human thought and human emotion.
References
Clugston, R. (2010). Journey into Literature (2nd ed.). San Diego, CA: Bridgeport Education. Read More
Share:
Tags
Cite this document
(“Writing about Literature Essay Example | Topics and Well Written Essays - 250 words”, n.d.)
Retrieved from https://studentshare.org/english/1678850-writing-about-literature

CHECK THESE SAMPLES OF Writing about Literature

Writing about personal learning and literature

.... Genre theory as well as instructions also seeks to provide the educators with the strategies, knowledge and skills to aid all the students instead of just the ones struggling (Derrida &Ronell, 1980). The genre approach (schema approach) is used to teach children about literature starting with the simplest literature form – prose and then moving onto increasingly sophisticated concepts for e.g. drama and poetry etc. Children are taught to learn to understand the different genres, as well as write proficiently on the simple ones during the early years of their schooling, when their writing is at the beginning level. Young children are familiarized with a number of different genre categories through anassortment of books as well as reading...
8 Pages(2000 words)Essay

...? It is not an unusual issue that parents push their children to do something they don’t want to do. Some parents force their children to choose a very good career path. Sometimes they push their children to be with people they don’t want to be with. These are the issues that we cannot avoid as children. Our parents are looking for what’s best for us. They mean well for us. But sometimes they just don’t know where to stop anymore. Sometimes they will cross the line. Our parents have very high academic expectations for us and sometimes we cannot live up to them. It is also hard for us children when times like this come. We will be concerned about disappointing them. What is difficult is to let them understand that each of us has our own...
3 Pages(750 words)Research Paper

In this paper, comparisons will be made between two articles that discuss Walter Isaacson’s retelling of the life of Steve Jobs, one of the most influential men in this century. It is curious to note that although both articles are presented in the same form of media, that is, online newspapers, the piece written by Janet Maslin for the New York Times appears more convincing and appropriate because of the words she used, how she presented her topic and the way she wrote her article. Since Walter Isaacson wrote best-selling biographies of Albert Einstein and Benjamin Franklin, it was not a big surprise that Steve Jobs wanted the Isaacson to write his life story. Nevertheless, because Jobs was as popular as his inventions, Isaacson...
3 Pages(750 words)Essay

... Cultural Practices In Western societies, it is very common for people being introduced to shake hands. This normhas been practiced for generations. The handshake is one of the most common gestures of communication around the world. It can either mean “hello”, “good-bye” or “we agree” (Haymond , par 1). One usually offers his hand when introduced to a stranger. In the corporate world, after a meeting and something has been agreed upon, the parties in the meeting shake hands signifying their concurrence. In the world of sports, after a game, one sees players shaking hands in the spirit of sportsmanship. Among friends or acquaintances, before parting, they sometimes shake hands as gesture of saying good-bye. For people who... Cultural...
2 Pages(500 words)Essay

...Women characters in Frankenstein The female characters in Mary Shelleys Frankenstein are all strong women who exhibit love and understanding towards the male characters and are very kind in their demeanor (Shelley). Mrs. Seville, whom the reader gets familiarized with from the very beginning of the novel, through the letters the traveler, her brother, writes to her, is presented as a very understanding person capable of kindness, love and care (Shelley, 17). The traveler has concluded his first letter, calling her “my dear, excellent Margaret”, and referring to her “love and kindness” (Shelley, 17). The continuous reassurance the traveler is giving in his letters to Mrs. Seville is an indication of her concern towards his safety (Shelley...
2 Pages(500 words)Essay

... Paper Mars is Heaven: An Analysis The humans have been fighting for too long in order to settle so-called national conflicts and get rid of terrorism. But, they are doing these entire things in an awful manner because they using force as a means of eliminating violence. Thus, the net effect of these man-made disasters is simply more violence. The story with a title of “Mars is Heaven” is a true representation of a dream of peaceful and coherent human existence (Bradbury, Mars is Heaven). The intellectual society of any nation is dedicated towards preservation of peace and therefore, the writer of the featured story conveyed the message of peace in his unique style. Still, the notion of peace hits the mind of human living... Paper Mars is...
4 Pages(1000 words)Essay

...Your full March 31, Literary Criticism “Poem about My Rights”, by June Jordon June Jordon in her poem, “Poem about my rights”, conveys the message about her strength, valor, courage, and determination. The main theme of this free verse poem is discrimination and oppression that a black woman experiences in the United States; yet, literary critics have linked this poem to Jordon’s resistance to her country’s demeaning. This essay highlights the idea that the structure and language used throughout June Jordans poem creates a very threatening and disgruntled tone, with the use of which the poetess has conveyed her message of equal rights (thesis). The language of the poem, with the help of imagery, is belligerent enough to convey...
2 Pages(500 words)Essay

This research is conducted to women and explores the challenges and problems that women face in society.
I can firmly state that my visit at the institution help me understand that female ethnography is essential in understanding the operation of the female gender. Lengthy conversation with students affirmed my position that feminist ethnography does not rule out rationality, rather the theory foreground the relationship with men (Aune 22). Notably, this concept is critical in this facility since it educates tolerance and respect for the dignity of individuals. In other words, the participants can be the restraint to the limitations of each since they are restraint their frustrations
Inherently, the hallmarks of feminist e...
4 Pages(1000 words)Essay

... to make fun of Islam; the remission, the punishment (nar)*, reward (jannah)*. He did whatever he craved without taking consequences into account. He thought he would be forgiven of all the sins he commits. Apart from that, Saleh was white from the inside; he was kind and caring. Saleh said, “Tell me more about you yourself.” I said, “Well, my name is Sarah Al-Marri, 18-years-old…” Saleh sarcastically interrupted me saying, “ Bedouin? I thought you had cultures and traditions to follow.” I took off my black, leather gloves and waved my hand that was patterned in abstract art of henna. In return, he rolls up his jacket and shows me his colored, very detailed tattoo that looked like a print on fabric. To be honest, I was more attracted...
2 Pages(500 words)Essay
sponsored ads
Save Your Time for More Important Things
Let us write or edit the essay on your topic "Writing about Literature" with a personal 20% discount.
GRAB THE BEST PAPER

Let us find you another Essay on topic Writing about Literature for FREE!