Comments (1)
Add to wishlist Delete from wishlist
Cite this document
Summary
In the American history, Puritans, who were mainly Protestants, had championed campaigns for the regulation of worshipping activities. They were not only strict observers of religious issues, but also the moral…
Download full paper File format: .doc, available for editing
HIDE THIS PAPERGRAB THE BEST PAPER96.7% of users find it useful 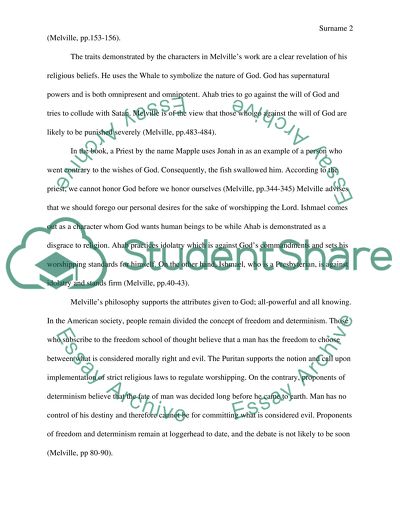 Religious and Philosophical Aspects in Melville’s Moby Dick The theme of religion cuts across Melville’s Moby Dick work. In the American history, Puritans, who were mainly Protestants, had championed campaigns for the regulation of worshipping activities. They were not only strict observers of religious issues, but also the moral standards that were declining in the society. Melville views religion as a cover up that worshipper use to hide their evil activities. According to him, man is by nature evil, and perfectionist only exists in an ideal world (Melville, p.4).
Melville uses two characters, namely Ishmael and Ahab in his work. The two are secluded and remain in isolation with the sole purpose of investigating religious matters around the world. Ahab does not believe in the biblical story of creation in the Garden of Eden. Instead of having a desire for spiritual nourishment, he stays firm and confronts wickedness. The firmness is symbolized by a whale in the book (Melville; pp.178-179) Ishmael perceives Ahab as a weak man who is only after avenging for the sins he committed. Although Ahab professed Christianity, he was just a hypocrite who was only hiding in the masses. On the other hand, another character by the name Starbuck is unsure about how God should be shown respect. Human beings have weaknesses that sometimes disconnect them with their maker. In order to build a relationship, they must overcome their internal emotions and weaknesses and honor their maker. Due to the disrespect, the alluded Adam showed to the maker, he is eliminated from the universe. Unlike Ahab, Ishmael, who observed the teachings of his maker is blessed immensely (Melville, pp.153-156).
The traits demonstrated by the characters in Melville’s work are a clear revelation of his religious beliefs. He uses the Whale to symbolize the nature of God. God has supernatural powers and is both omnipresent and omnipotent. Ahab tries to go against the will of God and tries to collude with Satan. Melville is of the view that those who go against the will of God are likely to be punished severely (Melville, pp.483-484).
In the book, a Priest by the name Mapple uses Jonah in as an example of a person who went contrary to the wishes of God. Consequently, the fish swallowed him. According to the priest, we cannot honor God before we honor ourselves (Melville, pp.344-345) Melville advises that we should forego our personal desires for the sake of worshipping the Lord. Ishmael comes out as a character whom God wants human beings to be while Ahab is demonstrated as a disgrace to religion. Ahab practices idolatry which is against God’s commandments and sets his worshipping standards for himself. On the other hand, Ishmael, who is a Presbyterian, is against idolatry and stands firm (Melville, pp.40-43).
Melville’s philosophy supports the attributes given to God; all-powerful and all knowing. In the American society, people remain divided the concept of freedom and determinism. Those who subscribe to the freedom school of thought believe that a man has the freedom to choose between what is considered morally right and evil. The Puritan supports the notion and call upon implementation of strict religious laws to regulate worshipping. On the contrary, proponents of determinism believe that the fate of man was decided long before he came to earth. Man has no control of his destiny and therefore cannot be for committing what is considered evil. Proponents of freedom and determinism remain at loggerhead to date, and the debate is not likely to be soon (Melville, pp 80-90).
Work Cited
Melville, Herman. Moby Dick. American Library, 1892.Print Read More
Share:
Tags
Cite this document
(“Religious and Philosophical Aspects in Melville's Moby Dick Essay”, n.d.)
Retrieved from https://studentshare.org/english/1668781-religious-and-philosophical-aspects-in-melvilles-moby-dick

ku
kulascarrie added comment 7 months ago
Student rated this paper as
I didn’t know how to start my essay. "Religious and Philosophical Aspects in Melville's Moby Dick" helped me out a lot! Especially the list of content was valuable.

...?Moby Dick The book ‘Moby- Dick’ written by Herman Melville is a story whose setting is mostly at sea and talks of interactions between sailors and encounters with whales. In the 41st chapter, the author in the first voice tells of the oaths that the sailors have taken against Moby Dick to hunt down and kill him. This paper also seeks to discuss the themes encompassed within this chapter among other literary aspects that are included. The chapter opens with Ishmael narrating the oathing ceremony that the sailors had undertaken after their captain, Ahab, had lost a leg and poor medical service caused by the long distance from land made him lose his mind. As Ishmael introduces us further to the life at sea, themes such as superstition stand...
3 Pages (750 words) Essay

Theme of Madness in the Novel Moby Dick by Herman Melville

It is a whale-ship. The ship is controlled by Captain Ahab who has a different intention in this voyage of taking retribution from the white sperm whale named Moby Dick who has damaged his boat and also bit off one of his legs (Melville, “Moby-Dick; or, The Whale”). An epic tale of American romanticism, the novel captivates ornate language, intricate symbols and intriguing metaphors. These metaphors pave a concrete way for the myriad themes and layers of interpretation which weaves the plot of the novel. The trajectory of the adventurous characters in the novel and the ordeal is build by themes like the role of class and its concept in the society, the victory of the good over evil and the omnipresence of the omnipotent almighty....
5 Pages (1250 words) Essay

The capacity to reveal human nature within fiction is especially true when demonstrating various ways of life, or aspects of social culture. Quality fiction, regardless of when it was written or the length of the written text, can reveal significant aspects of human nature and thus reveal us to ourselves as we identify various elements of the story with our everyday lives. Literature such as Melville's novel Moby Dick or The Whale remind us that even when we feel we belong within a society, there are often elements of otherness that keep us separate. One of the first examples of Otherness found within the book is Ishmael's enforced relationship with Queequeg. Otherness is established when Ishmael checks into a very crowded whaler...
3 Pages (750 words) Essay

The author remarkably included the idea of a voyage in the entire novel that would tell us about the important point of life exploration and journey, leading us to be able to meditate on the things around us and learn many things from them as we go deeper into experience and maturity. This is a silent message that the author might want to show to us. At some point, for some, this claim might be so trivial, but to give emphasis that the novel simply talks about life, the work at hand tries to create a fundamental critical analysis based on the case to substantially interpret the point of Melville in creating characters and symbols that truly were not due to random chance, but a necessity in order to give the whole image of the actu...
4 Pages (1000 words) Book Report/Review

He returns home never to set foot in the distant land of the civilized. In this novel Ishmael did not feel sympathy or compassion for Queequeg. Instead he began to respect him and it is this respect that brought them closer to each other. Although society would not accept Queequeg into its midst, the barbarian still found a place in civilized society. It is this special tie that binds the two central characters of the story that makes it noteworthy to analyze.
Ishmael, a school teacher, was fearful of Queequeg, the whale harpooner. The fear of sharing a room with a savage and man-eating barbarian scared him. But his fears turned into respect when he saw that Queequeg, really savage looking, would pray and perform ritua...
3 Pages (750 words) Book Report/Review

...Running Head: MOBY DICK Moby Dick [The [The of the Moby Dick Thesis ment In Herman Melville's novel, Moby Dick, there are certain events and situations which are related to the plot and the characters and these events and situations signal things to come or happen in future. Broadly speaking, these events and situations represent foreshadowing devices in prospective course of action of the novel. Introduction A man's life can be exceptionally different according to his acceptance of morals. Taking place in the 1800s, Herman Melville's classic novel, Moby Dick, introduced this contrast through the characters Ahab and Starbuck. Ahab was the whaling ship's captain who had no morals and let his obsessions bring himself down. Conversely...
4 Pages (1000 words) Essay

Physical Suffering and Death in Frankenstein and Moby Dick

... and physical suffering of both the novels are interconnected as they deal with pursuit of the protagonists in which, they become a reason for the causation of death of the people related to them. The tragic ends of the novels are because of the pursuits of the protagonists. References Melville, Herman. Moby-Dick. New York: Bantam Classic. 1981. Shelley, Mary. Frankenstein. St. Paul: EMC Publishing, 1998....Two protagonists Ahab and Victor become a reason for causing death and suffering to their beloveds and other people connected to them and later on, their acts cause their death as well.
Victor Frankenstein creates a human-like creature that is disgusting and hatefu...
1 Pages (250 words) Essay

... A short analytical response to "Moby-Dick" by Herman Melville. Chapters 23-71. Ishmael sets out to find a boat for use in carrying out a whaling exercise. It is in this course of action that he encounters s the crew whom they join in the ship, the Pequod. All of them seem to share a similar endeavor .i.e. whale hunting adventure, except for the ship’s leader, Captain Ahab. He clearly states his longing to kill Moby Dick the white whale for taking his leg. The crew heads for the equator where they expect to find the whale. The text brings out the various characters’ determination, strength, weakness, fear, and acceptance of fate in their adventure while revealing Moby Dick’s mystery and power in subduing his opponents. … at times...
2 Pages (500 words) Essay

His experiences also contributed to his whaling voyages on the ‘Acushnet and the writing the 139 chapters of the Moby Dick.
The author has used the book to tell his experiences at sea, especially the ‘whaling voyage.’ The plot of the book has a setting time of the early 1800s where cruising and conquering the rough seas were the main activities. The storyline is based on a journey to the South Pacific. Herman has categorized the plot in various chapters in his book.
The story is narrated in first and third person. The plot begins with a narrator, Ishmael, who wants to board a sailing ship as a ‘whaler but not a ‘sailor (Melville 11). It would gain him more fame since he will have to overcome whale fears. He boards the Peq...
4 Pages (1000 words) Book Report/Review
sponsored ads
Save Your Time for More Important Things
Let us write or edit the essay on your topic "Religious and Philosophical Aspects in Melville's Moby Dick" with a personal 20% discount.
GRAB THE BEST PAPER

Let us find you another Essay on topic Religious and Philosophical Aspects in Melville's Moby Dick for FREE!