Agree or disagree with Lay Off the Layoffs - Essay Example

Comments (0)
Add to wishlist Delete from wishlist
Cite this document
Summary
I read your article entitled “Lay-off the Layoffs” printed in Newsweek on February 4, 2010 which presented significant disadvantages of laying off personnel (Pfeffer). From the actual organizational experiences of famous corporations such as those belonging to the airlines…
Download full paper File format: .doc, available for editing
HIDE THIS PAPERGRAB THE BEST PAPER94.7% of users find it useful 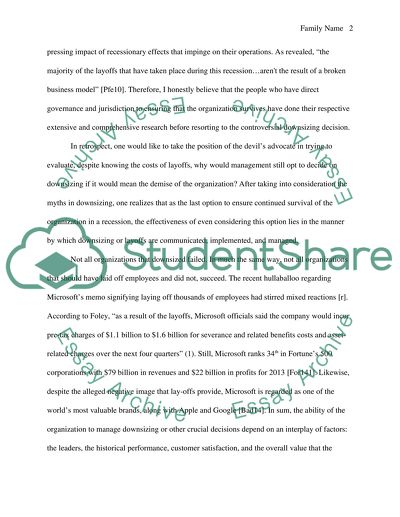 Extract of sample "Agree or disagree with Lay Off the Layoffs"

September 13, A Response to “Lay-off the Layoffs” September 13, Mr. Jeff Pfeffer NewsweekRe: Lay-off the Layoffs
Dear Mr. Pfeffer:
I read your article entitled “Lay-off the Layoffs” printed in Newsweek on February 4, 2010 which presented significant disadvantages of laying off personnel (Pfeffer). From the actual organizational experiences of famous corporations such as those belonging to the airlines industry, Circuit City, and those who noted in the ‘biggest lay-offs” where Hewlett Packard and American Airlines topped the list (Platt), it was emphasized that downsizing produce greater negative effects and impacts on people, subsequent performance and productivity of the organization, as well as to the economy. One shares similar contentions that despite the apparent justification or rationales of organizations that opt to lay-off employees, the long-term negative effects are immensely significant to overlook.
It is commendable to have provided the general reasons why organizations resort to layoffs in the first place. I am sure that members of the board of directors, the executive management team, as well as senior management, have all exhausted strategies, resources, time, and efforts to ensure that their respective organizations would survive the most tediously pressing impact of recessionary effects that impinge on their operations. As revealed, “the majority of the layoffs that have taken place during this recession…arent the result of a broken business model” (Pfeffer par. 4). Therefore, I honestly believe that the people who have direct governance and jurisdiction to ensuring that the organization survives have done their respective extensive and comprehensive research before resorting to the controversial downsizing decision.
In retrospect, one would like to take the position of the devil’s advocate in trying to evaluate, despite knowing the costs of layoffs, why would management still opt to decide on downsizing if it would mean the demise of the organization? After taking into consideration the myths in downsizing, one realizes that as the last option to ensure continued survival of the organization in a recession, the effectiveness of even considering this option lies in the manner by which downsizing or layoffs are communicated, implemented, and managed.
Not all organizations that downsized failed. In much the same way, not all organizations that should have laid off employees and did not, succeed. The recent hullaballoo regarding Microsoft’s memo signifying laying off thousands of employees had stirred mixed reactions (Roose). According to Foley, “as a result of the layoffs, Microsoft officials said the company would incur pre-tax charges of $1.1 billion to $1.6 billion for severance and related benefits costs and asset-related charges over the next four quarters” (1). Still, Microsoft ranks 34th in Fortune’s 500 corporations with $79 billion in revenues and $22 billion in profits for 2013 (Fortune). Likewise, despite the alleged negative image that lay-offs provide, Microsoft is regarded as one of the world’s most valuable brands, along with Apple and Google (Badenhausen). In sum, the ability of the organization to manage downsizing or other crucial decisions depend on an interplay of factors: the leaders, the historical performance, customer satisfaction, and the overall value that the firm’s products or services provide towards improving the welfare of the greatest number of people for the greater good.
Works Cited
Badenhausen, Kurt. "Apple, Microsoft And Google Are Worlds Most Valuable Brands." 5 November 2014. Forbes. 18 November 2014 .
Foley, Mary Jo. "Microsoft cuts another 3,000 employees as part of its layoff of 18,000." 29 October 2014. ZD Net. 18 November 2014 .
Fortune. "Fortune 500 2014." 2014. fortune.com. 18 November 2014 .
Pfeffer, Jeff. "The Case Against Layoffs: They Often Backfire." 4 February 2010. Newsweek. 18 November 2014 .
Platt, E. "The 16 Biggest Mass Layoffs Of The Year." 25 July 2012. Business Insider. 18 November 2014 .
Roose, Kevin. "Microsoft Just Laid Off Thousands of Employees With a Hilariously Bad Memo." 17 July 2014. New York Media LLC. 18 November 2014 . Read More
Share:
Tags
Cite this document
(“Agree or disagree with Lay Off the Layoffs Essay”, n.d.)
Retrieved from https://studentshare.org/english/1665860-agree-or-disagree-with-lay-off-the-layoffs

(Agree or Disagree With Lay Off the Layoffs Essay)
https://studentshare.org/english/1665860-agree-or-disagree-with-lay-off-the-layoffs.

“Agree or Disagree With Lay Off the Layoffs Essay”, n.d. https://studentshare.org/english/1665860-agree-or-disagree-with-lay-off-the-layoffs.
Comments (0)
Click to create a comment or rate a document

Lay-Off due to Economic Difficulties

... prior to termination or lay-off. In certain cases, employers must give the workers advanced notice of mass layoffs or plant closure. The Warn Act provides specific information on advance notice, employer responsibility and workers rights during mass layoffs or plant closure” (U.S. Department of Labor, N.D.). 2. Severance Pay Company ABC will offer a severance package that depends on gender and members of the union. As indicated: “because men generally are the heads of households and support dependents, ABC is going to offer them more severance pay than women.  Some employees are union members and their CBA provides less severance than the Company plans to offer, so management is going to be nice and give them the higher severance amount...
4 Pages (1000 words) Essay

Tannen agree or disagree with in Smiley Article

To link with Smiley’s positive and explorative explanation of women being constructively influenced by the exposure to a Barbie doll in their early childhood years is an even tedious topic. But with assumptions to the question set, Tannen would agree with Smiley’s argument about Barbie having a positive effect toward little girls when they grow up. There has to be certain factors that should be taken into consideration in analyzing the agreements on both articles and their relationship with each other. An item that could be taken into consideration may be the two authors’ background. They seem to come from two different classes of women and since what they write is subtly, and even directly be affected by the way they discuss cer...
4 Pages (1000 words) Essay

...?THE LAY INVESTITURE: POPE VS. KING Insert of of the supervisor THE LAY INVESTITURE: POPE VS KING Lay investiture controversy was the most profound conflict between state in medieval Europe and the church. Several popes opposed the powers of European kings over control of investitures of church officials such as abbots and bishops. The major conflict began in 1075 between Henry IV, a holy roman emperor, and Pope Gregory VII. An important struggle over the control of investitures occurred between 1103-1107 between Pope Paschal II and Henry I of England (Wilhelm 1990, 37). In Western Europe and during the Middle Ages, religious and secular authorities were intertwined. Kings had taken some duties and trappings entitled to priests while some...
5 Pages (1250 words) Research Paper

... Frito Lay One of the key reasons that made Frito Lay focus on sales results, as a key indicator for job performance for route sales representatives is that since the company paid the employees on a commission basis depending on the number of snacks they sold, it was an adequate motivation for the employees to try to maximise their sales. Some of the features of the sales job that made it appropriate for a results based approach to job performance are that the number of sales that the employees make determines the amount of profits that the company will make. Secondly is that the payment mode of the job is on a commission basis depending on the number of sales that an individual makes. 2. One of the advantages that accrue to Frito Lay...
3 Pages (750 words) Essay

Agree or disagree with Hawking's quotation

...Argument Talking is undoubtedly one of the most essential features of life. Talking is the fundamental means by which ideas get communicated at any level, be that domestic, national, or international. The importance of talking can be estimated from the fact that the pace of technological advancement and growth of knowledge and information became fast only after the evolution of language. Scientific sources suggest that in the beginning of world, people used to communicate with signals. Compared to that, today, so many different kinds of languages and ways of communication have evolved that it is hard to count them. While the importance of talking throughout the history of mankind in general and in the contemporary age... Talking is...
2 Pages (500 words) Essay

Agree or Disagree with Speakers' Optimism

Agree or Disagree with ISLAM

... Agree or Disagree with ISLAM There is no mistake in the idea that the human race is different from the rest of the living organisms on the planet. Indeed, there is a considerable number of characteristic features that reflect the peculiarity of our nature, such as ability to generate verbal interaction. However, it is clear that the highly developed spiritual world is what makes the human civilization stand out. That is why the role which the religion has played in the formation of the human identity can hardly be exaggerated. At the present moment there are several world religious which unite a lot of people. This paper will examine closely one of them, namely Islam, examining its main beliefs and practices as well as present the opinion...
4 Pages (1000 words) Research Paper

Agree with or disagree with

... number 28 April "After World War I, <...>" (Auchincloss 2). The World War I consequences had both positive and negative effects for the economic development of the USA and strengthening of its geopolitical position in the world. Shortly after the war was over the U.S. economy slowed down because a number of business segments involved in catering for military industry during the active phase of the war started experiencing problems with reorientation of their business policy to new challenges of a peaceful life when the demand for military production dropped dramatically. Thus, I agree with the aforementioned statement. "The World War II shaped <...>" (Auchincloss 2). In fact, the World War forced thousands of American men to cross... number 28 April...
1 Pages (250 words) Article

...I completely agree with the ment made by Kenneth Auchincloss in his article “Americans Go To War” that we should not go into war unless this is the last resort and totally necessary to do so. People often can’t make sense of war conflicts and even though no war was conducted on US soil since the Civil War, Americans have suffered the consequences of war far and beyond. The wars in Vietnam and Korea have created such a public outbreak. Society can no longer stand still and just watch. The anti-war movement during this period took by surprise US political world. The wars in Vietnam and Korea produced a whole generation of veteran warriors who suffers from all possible psychological and behavioural disorders. This generated some sort...
1 Pages (250 words) Essay
sponsored ads
Save Your Time for More Important Things
Let us write or edit the essay on your topic "Agree or disagree with Lay Off the Layoffs" with a personal 20% discount.
GRAB THE BEST PAPER

Let us find you another Essay on topic Agree or disagree with Lay Off the Layoffs for FREE!