Comments (0)
Add to wishlistDelete from wishlist
Cite this document
Summary
Presenting ideas and views confidently, clearly, and concisely promotes free-flowing communication. Expressing own ideas means that one is listening to what others are…
Download full paperFile format: .doc, available for editing
HIDE THIS PAPERGRAB THE BEST PAPER92.6% of users find it useful 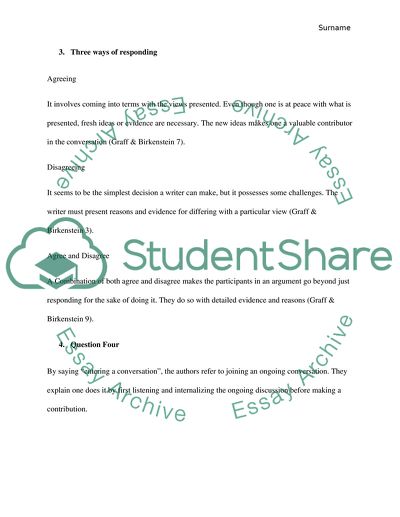 Extract of sample "They Say, I Say Homework"

They Say, I say Importance of expressing your ideas when responding to others Expressing own ideas whenresponding to other’s queries and comments creates an effective communication. Presenting ideas and views confidently, clearly, and concisely promotes free-flowing communication. Expressing own ideas means that one is listening to what others are saying and summarizing their ideas in an intellectual way (Graff & Birkenstein 3).
2. Importance of being a critical and intellectual thinker in debates
The ability to think intellectually and critically is an important skill in life, but it is unfortunate that many people lack it. Critical thinking aids in solving complex problems because it requires handling them from several standpoints before making a decision. A critical and intellectual thinker deduces consequences and makes useful information from what is available. A critical thinker engaging in debates and conversations cannot be confused by what others are saying, but will instead lead to a cooperative reasoning and strengthen the argument (Graff & Birkenstein 3).

3. Three ways of responding
Agreeing
It involves coming into terms with the views presented. Even though one is at peace with what is presented, fresh ideas or evidence are necessary. The new ideas makes one a valuable contributor in the conversation (Graff & Birkenstein 7).
Disagreeing
It seems to be the simplest decision a writer can make, but it possesses some challenges. The writer must present reasons and evidence for differing with a particular view (Graff & Birkenstein 3).
Agree and Disagree
A Combination of both agree and disagree makes the participants in an argument go beyond just responding for the sake of doing it. They do so with detailed evidence and reasons (Graff & Birkenstein 9).
4. Question Four
By saying “entering a conversation”, the authors refer to joining an ongoing conversation. They explain one does it by first listening and internalizing the ongoing discussion before making a contribution.
What one needs to pay close attention to are the views of the other participants. What they say forms the basis of any views to be made (Graff & Birkenstein 3). The conversation they are talking about is academic writing, for example, argumentative essay writing.
Works Cited
Graff, Gerald, and Cathy Birkenstein. They say / I say: the moves that matter in academic writing. 2nd ed. New York: W.W. Norton & Co., 2010. Print. Read More
Share:
Tags
Cite this document
(“They Say, I Say Homework Assignment Example | Topics and Well Written Essays - 250 words”, n.d.)
Retrieved from https://studentshare.org/english/1661363-they-say-i-say-homework

CHECK THESE SAMPLES OF They Say, I Say Homework

Some Say I Was Poor

...?Some Say I Was Poor Individuals in this society believe that being poor is a curse or is something which a person should be hated for. But I believethe opposite because of the experiences that I had to go through because of me being poor. Many say that poor people don’t have enough to get happy on but I believe that I had all those moments of happiness which a rich child would have in his childhood. Although I did not have everything like a rich child would have, i had enough to get happy on. Starting from my home we had a problem of sanitation in our home which was somewhat difficult for us but as time went by we received the heavenly blessing of running water in our home. This brought some joy of happiness in my life as we no longer had...
3 Pages(750 words)Essay

...﻿On Wolfe’s Say Yes Entire Journal Entry My first thing that caught my attention in the story is the fact that nowadays, husbands do not help in the household chores anymore as they are always busy in the provision for the family. I begin to question whether this story really happens in the real world. Reading further, I begin to realize how the husband really tried his best in winning the argument. He didn’t shut his mouth when he knew he need to. The wife seemed to be thinking the same way as she tried to battle with the same persistence that her husband displayed. What becomes apparent, however, is the husband’s love for his wife. Even in the middle of the argument, he showed his deep concern for her which is in stark contrast with how...
2 Pages(500 words)Book Report/Review

...Say-On-Pay Introduction Say-on-pay is a scenario where the shareholders of any given company has a say or to be precise, a vote on the compensation that an executive of the company should be rewarded. Debates have been staged in the past of the relevance of such acts in a company. Therefore, questions as one presented below may come up because Say-on-pay is a frequently done phenomenon in any modern organization. Thesis statement Therefore, “Does this act respond to the relationship of pay for performance? Will a shareholder’s vote create a stronger relationship between pay and performance? And will it reduce the situations where pay for failure takes place?” Shareholders are the owners of any given firm or company and the interest...
2 Pages(500 words)Essay

...Your address address Dear Following your advertisement of the position of a marketing manager, I would like to request a consideration. I believe that I am the suitable candidate for this post as one of the manager’s roles is to make sure that a product is well exposed in the market. Secondly, I will ensure product availability in the market thereby increasing sales volume. My strongest point for the position above is increasing sales volume. Moreover, creation of awareness and advertising a product in a market has provided me with an opportunity to interact with retailers, suppliers, team and advertising agencies with no interference from government and company regulations. Besides my excellent skills, I can organize and handle teams...
1 Pages(250 words)Essay

Having our say (racism)

...Having They Say The book “Having They Say” by Sarah and Elizabeth Delany along with Amy Hill Hearth talks about two sisters who are colored and lived in South. Bessie and Sadie present the memoir in a vivid way. The two women Bessie and Sadie are raised in Saint Augustine School to get well educated. Both these women had been facing racism and had a very different way of reacting to it. Bessie would respond to the racist comments while Sadie would ignore them. Even though, they lived together they are very different from each other. Their way of handling life, treating racism and even the color of skin was different. Bessie being darker encountered harsher racism than Sarah. The sisters were different in life but they came from same...
2 Pages(500 words)Essay

The Influence of They Say, I Say Book on Me

... Lecturer They say, I say Tying all Together The narrates about his change that began back in 2003, when he applied for jobsand he would not get any feedbacks or even been called for interviews. This is when it came clear in his mind that something was wrong when he compared the past years on how he quit four jobs and still was called for an interview that got him another type of job. This had given him the confidence but little did he expect the shock of toiling for months minus responses to the resumes and applications. He indeed got a blow to his ego (Graff, Gerald & Birkenstein 2007). To him, life became unbearable when his he even decided to attend new meetings to improve on the knowledge he had, as the unemployment benefits were...
2 Pages(500 words)Essay

They Say / I Say Intro and assignment

Legend The term “legend” is synonymous with “celebrity” or “fame” in many people’s minds. They see legends as having lived their lives in an exemplary and admirable way. The mere mention of the word legend makes people think of the many epic fighters, poets, playwrights and politicians about whom they have heard. However, legend does not always connote a celebrity, victorious or outstanding way of life. On the contrary, legend can also refer to a fake story that undercover law enforcement officers adopt in order to hide their identity. Undercover law enforcement officers adopt fake identities in order to mingle with criminals and gather intelligence information that can help expose their criminal activities. A financially stable u...
1 Pages(250 words)Essay

Say no to Racism

...Say No to Racism Due What is racism? The term racism is the feeling that character and individual capability depends on ones race. It refers to the belief that one’s race is superior to another and exercising discrimination to instil fear and inferiority based on one’s biological background. The mode of judging other races is based on myths rather than known facts. Where does racism happen? Racism occurs in many places ranging from workplace to social amenity locations. As matter of fact, racism is real in many scenarios composed of different race individuals interacting. Who is a racist? A racist is a person with the belief that other races are inferior to his and for that reason substandard others by either mistreating...
1 Pages(250 words)Research Paper

Say no to Racism

...SAY NO TO RACISM Racism is referred to as discrimination of a person by another on the basis of skin color, language, place of birth, customs, or factors that expose the characteristics of that person. Apart from discrimination, racism also consists of prejudice defined by biological difference between people. Practice of racism often results to a racist. It is as a result of racism that civil wars, racial and ethnic cleansing, as well as relationship ties, break down between countries. The many forms of racial discrimination include direct racial discrimination, indirect racism, victimization, and harassment. Direct racial discrimination involves treatment of an individual in a less favorable manner compared to others in the same...
1 Pages(250 words)Assignment
sponsored ads
Save Your Time for More Important Things
Let us write or edit the assignment on your topic "They Say, I Say Homework" with a personal 20% discount.
GRAB THE BEST PAPER

Let us find you another Assignment on topic They Say, I Say Homework for FREE!