Comments (0)
Add to wishlistDelete from wishlist
Cite this document
Summary
“The changes introduced in the early 1980s were reinforced by a system that encouraged institutions to be self-financing, by charging tuition and enrollment fees…” (Espinoza & Gonzalez, 2013, p. 200).
ii. This move has been identified as key to improving enrollment in…
Download full paperFile format: .doc, available for editing
HIDE THIS PAPERGRAB THE BEST PAPER97% of users find it useful 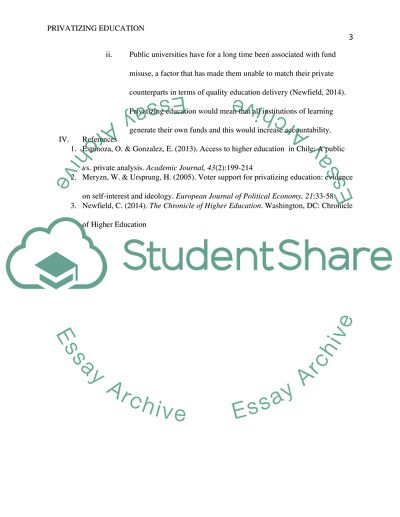 Education should be privatized, as it is a Privilege not a Right Supervisor: October 8, I. Education should be privatized as it is a Privilege not a Right
II. This paper argues that education should be privatized and therefore, treats education as a privilege rather than a right.
III. Body
1. Poor quality education in public schools has necessitated privatization of education.
i. “In the United States, lament about the poor quality of public schools has been an integral part of the economics of education…” (Meryzn & Ursprung, 2005, p. 34).
ii. Scholars have proposed that privatizing education would improve the quality of education in schools considering the high regulation experienced in private schools (Meryzn & Ursprung, 2005).
2. Privatizing education provides healthy competition among higher learning institutions, and consequently increases education quality in these institutions.
i. “The changes introduced in the early 1980s were reinforced by a system that encouraged institutions to be self-financing, by charging tuition and enrollment fees…” (Espinoza & Gonzalez, 2013, p. 200).
ii. This move has been identified as key to improving enrollment in higher education institutions that in turn has been necessitated by the growing demand for higher education among secondary school graduates (Espinoza & Gonzalez, 2013).
3. Misappropriation of funds by public universities has also necessitated the need to privatize education.
i. “Public universities have gotten sandbagged by frustrating and confusing debates about financial resources, administrative bloat, tuition bubbles…” (Newfield, 2014, p. 1).
ii. Public universities have for a long time been associated with fund misuse, a factor that has made them unable to match their private counterparts in terms of quality education delivery (Newfield, 2014). Privatizing education would mean that all institutions of learning generate their own funds and this would increase accountability.
IV. References
1. Espinoza, O. & Gonzalez, E. (2013). Access to higher education in Chile: A public vs. private analysis. Academic Journal, 43(2):199-214
2. Meryzn, W. & Ursprung, H. (2005). Voter support for privatizing education: evidence on self-interest and ideology. European Journal of Political Economy, 21:33-58
3. Newfield, C. (2014). The Chronicle of Higher Education. Washington, DC: Chronicle of Higher Education Read More
Share:
Tags
Cite this document
(“Education Should be privatized as it is a privilege not a right Assignment”, n.d.)
Retrieved from https://studentshare.org/english/1660008-education-should-be-privatized-as-it-is-a-privilege-not-a-right

(Education Should Be Privatized As It Is a Privilege Not a Right Assignment)
https://studentshare.org/english/1660008-education-should-be-privatized-as-it-is-a-privilege-not-a-right.

“Education Should Be Privatized As It Is a Privilege Not a Right Assignment”, n.d. https://studentshare.org/english/1660008-education-should-be-privatized-as-it-is-a-privilege-not-a-right.
Comments (0)
Click to create a comment or rate a document

Is Education a Privilege or a Right

...?Is Education a Privilege or a Right? The definition of privilege according to Merriam Webster is, “a right or immunity granted as a peculiar benefit, advantage, or favor” (Privilege, 2011). Education is an inherent right of humans; the ability to learn is something we all have. The difference is how we each intend to use that ability. Education as a mandate is a privilege by default, once something is mandated or “enforced” then it is defined purely by the rules of the agency or government mandating it. As a result in this context regarding state funded and monitored...
2 Pages(500 words)Essay

Health care in America: a right or a privilege

...? Health care in America: A Right or a Privilege?  Your compete al Affiliation The paper addresses the much debated issue ofwhether health care in U.S. is a right or a privilege. By analyzing the health care system, accepting the foundations laid by our forefather, and considering the pulse of majority of U.S. citizens, the paper concludes that the health care is a basic human right; however, the gaps in the system have made it a privilege in United States of America. By considering different studies, it seems that the debates should shift from deciding on whether health care is a right or...
3 Pages(750 words)Essay

...if they are not contributing to the progress and strengthening of the country. They have no second thoughts when it comes to health as a right or privilege. The more deprived believe health care is their right, whereas the capable and with suffice resources do not think so. With more awareness and education, the level of living standards of individuals increases. So they can easily make choices about approaching local health care facilities or going abroad. Poor or those who cannot manage high cost of overseas health care have to rely on local facilities. This creates a gulf of discontent and mistrust among societies. Developed nations on the other hand believe that...
8 Pages(2000 words)Research Paper

..., a person may donate his or her kidney, which is a good and honorable act, but at the same time, it is a huge health risk. Conclusion I confidently say that health care should be a right rather than being a privilege. It is right for all individuals to have better access to healthcare since human beings cannot be compared to animals. Looking at the ethnical theories, we should be able to improve the standards of the health care unit, by helping one another in the journey to a healthy world. References Crisp, R. (2000). Mill on Utiliarianism. London: Routledge. Farmer, P. (2005). Pathologies of Power:Health, Human Rights and the new war...
9 Pages(2250 words)Research Paper

...? Britain's Privatized Railway System: A Literature Review BRITAIN'S PRIVATIZED RAILWAY SYSTEM: A LITERATURE REVIEW Introduction The Conservative government in the UK began British Rail’s privatization in January of 1993 with the enactment of the British Coal and British rail Act 1993 (Jupe & Crompton, 2006: p1036). This freed up the Secretary of State to give the relevant board directions concerning the disposal of its holdings. This Act was necessary because the government at all times had to act by the rules that were established by various Acts covering transport and railways, which would have stopped the board from disposing of the assets. Following the Secretary of state’s actions,...
5 Pages(1250 words)Literature review

...-related socioeconomic privilege encourages Protestant work ethics by placing work and responsibility on male shoulders, while the woman is sidestepped. The situation is compounded by a patriarchal society [as was in the case of pre-1950s America] where the forces of production such as capital, land and labor and even opportunities are inordinately in the hands of the male industrialists and capitalists. According to McIntosh, normally, the male industrialists, entrepreneurs and capitalists were white American. Specifically, given that Protestant work ethic stresses that people should be seriously dexterous and taking their social security into their hands, the socioeconomic marginalization of women and...
4 Pages(1000 words)Essay

Majors Forces That Have Privatized Religion

.... This regularly leads to devotees becoming disillusioned concerning which conviction is appropriate, permitting people the option to desert religion completely. Science, education and intelligence are all roots of the end of religion, since they cause individuals to be incapable of remaining religious. Lastly, the human rights concept has made numerous religious practices appear immoral and barbaric, as gender impartiality, racism and bias against homosexuals have been conquering over religious doctrines, which oppress and stigmatize some individuals. This paper will identify and critically discuss the major forces, which have privatized religion in modernity. Compartmentalism and...
8 Pages(2000 words)Essay

...print media and television media hereafter and student notions of privilege. One reason this study may be significant is because it begins to examine the role of the social studies teacher in making the unintended consequences employed by mass media to define culture visible to students. It is also important because it attempts to measure student awareness of the media. It may begin to provide insights for future research on how the media affects student's perception of not only privilege but of other aspects of social studies education like race, gender, and conditions of freedom. Thompson, Robert J. (1996) The purpose of this study is not to condemn the media; rather this study is...
12 Pages(3000 words)Essay

...Education Should Be Privatized Affiliation Education privatization Introduction Several debates on the place of public and private schools in terms of quality and goodness. Education has been taken to be a right, but not a privilege. There has been many position on this topic that has cause many argument about it that often deal with academic too much and leave other views on life. This paper try to say that education is a privilege and, therefore, should be...
6 Pages(1500 words)Essay

... and writing proficiency as much as well as the ability to express myself even to people I am not familiar with. My privileges growing up have allowed me to have good health and a college education that will make my life better. Work cited Chen, Edith Wen-Chu, and Glenn Omatsu. Teaching About Asian Pacific Americans. Lanham, Md.: Rowman & Littlefield Publishers, 2006. Print. Niebuhr, Reinhold. Moral Man and Immoral Society: A Study in Ethics and Politics. N.p., 2013. Print.... Lecturer: Privilege Privilege demonstrates failing and reluctance to recognize the advantages that a person has received from thesociety (Chen and Omatsu 247). Some inequalities created by privilege are too big to be...
2 Pages(500 words)Essay
sponsored ads
Save Your Time for More Important Things
Let us write or edit the assignment on your topic "Education Should be privatized as it is a privilege not a right" with a personal 20% discount.
GRAB THE BEST PAPER

Let us find you another Assignment on topic Education Should be privatized as it is a privilege not a right for FREE!