Comments (0)
Add to wishlist Delete from wishlist
Cite this document
Summary
Hence, the cabinet-makers used walnut, chestnut, and other forms of wood and abandoned the use of coarser oak to a great extent.
Cabinets featured designs of palaces and…
Download full paper File format: .doc, available for editing
HIDE THIS PAPERGRAB THE BEST PAPER96.2% of users find it useful 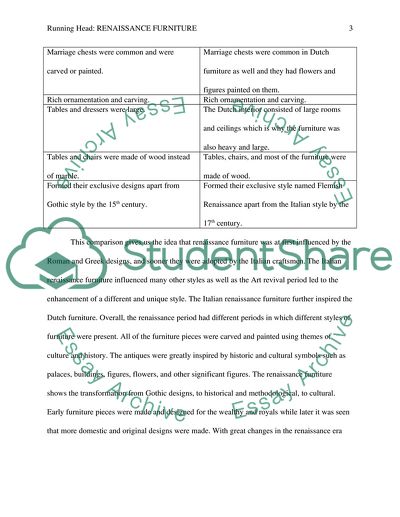 Extract of sample "Compare and Contrast of Renaissance Furniture"

Renaissance Furniture Introduction The table below will assess the similarities and differences of the Italian and Dutch renaissance furniture.
ITALIAN
DUTCH
The renaissance furniture in Italy was influenced by the Roman and Greek antiques. It was developed by the wealthy people who had an interest in Arts.
The renaissance furniture in Netherlands was influenced by Italian furniture and was developed by Dutch artists using these Italian models.
The Italian renaissance furniture had a palatial character and it carved the spirit of the Art revival. Hence, the cabinet-makers used walnut, chestnut, and other forms of wood and abandoned the use of coarser oak to a great extent.
The Dutch renaissance furniture had a domestic character and it was exclusively made of oak. Oak was the only wood used till a long period of time, and then later ebony and other rare woods were used.
The Italian furniture carvings were more inspired by methodological, historical, and allegorical subjects.
The Dutch furniture was inspired by the Dutch culture including cathedrals, community buildings, and other common Dutch motifs.
Cabinets featured designs of palaces and chairs had increased in number. The chairs were not rectangular and carved anymore; they were now smaller and more comfortable with wooden seats and cushions on them.
Cabinets, wardrobes, and chairs were massive and heavy weighted. They were heavy and thick carved by hand expressing typical Dutch architecture and design. The chairs had turned legs which were also carved by hand. Drawer fronts and doors were also carved delicately.
Marriage chests were common and were carved or painted.
Marriage chests were common in Dutch furniture as well and they had flowers and figures painted on them.
Rich ornamentation and carving.
Rich ornamentation and carving.
Tables and dressers were large.
The Dutch interior consisted of large rooms and ceilings which is why the furniture was also heavy and large.
Tables and chairs were made of wood instead of marble.
Tables, chairs, and most of the furniture were made of wood.
Formed their exclusive designs apart from Gothic style by the 15th century.
Formed their exclusive style named Flemish Renaissance apart from the Italian style by the 17th century.
This comparison gives us the idea that renaissance furniture was at first influenced by the Roman and Greek designs, and sooner they were adopted by the Italian craftsmen. The Italian renaissance furniture influenced many other styles as well as the Art revival period led to the enhancement of a different and unique style. The Italian renaissance furniture further inspired the Dutch furniture. Overall, the renaissance period had different periods in which different styles of furniture were present. All of the furniture pieces were carved and painted using themes of culture and history. The antiques were greatly inspired by historic and cultural symbols such as palaces, buildings, figures, flowers, and other significant figures. The renaissance furniture shows the transformation from Gothic designs, to historical and methodological, to cultural. Early furniture pieces were made and designed for the wealthy and royals while later it was seen that more domestic and original designs were made. With great changes in the renaissance era seen in education, arts, and literature, there was also significant change seen in the furniture characteristics.
References
History of Furniture Design in the Renaissance. (n.d.). History of Furniture Design in the Renaissance. Retrieved October 15, 2014, from http://www.infoarticles.net/history-of-furniture-design-in-the-renaissance.html
Italian Renaissance Furniture. (n.d.). Italian Renaissance Furniture. Retrieved October 15, 2014, from http://www.furniturestyles.net/euro
Renaissance Furniture. (n.d.).Renaissance Furniture. Retrieved October 15, 2014, from http://www.renaissance-spell.com/Renaissance-Furniture.html Read More
Share:
Tags
Cite this document
(“Compare and Contrast of Renaissance Furniture Research Paper”, n.d.)
Retrieved from https://studentshare.org/english/1659221-compare-and-contrast-of-renaissance-furniture

“Compare and Contrast of Renaissance Furniture Research Paper”, n.d. https://studentshare.org/english/1659221-compare-and-contrast-of-renaissance-furniture.
Comments (0)
Click to create a comment or rate a document

CHECK THESE SAMPLES OF Compare and Contrast of Renaissance Furniture

...?This is a comparison and contrast between Cinderella and Ashputtle. Both the stories are very similar with only minor differences which will be discussed below. Both the stories essentially follow the same storyline but there are some changes. Charles Perrault’s focuses on the simplicity and kind heartedness of Cinderella who never wishes badly for anyone. Her father is described as a weak individual and is not a prominent character in the story (Perrault). More focus is kept on Cinderella and her fairy Godmother. The Fairy Godmother keeps on telling Cinderella to be a good girl and Cinderella listens to her. Cinderella is shown as a very kind-hearted and innocent girl who always does good to others. Hence in the end Cinderella...
2 Pages (500 words) Essay

... Comparison and Contrast between two close friends Introduction My two closest friends are John and George. We have been friends since third grade and have to this day, served as one another’s support system for as long as we have known each other. George is very athletic while John is the geek in the group. The latter has interests in computers and knowledge in general, while the former plays football and recently made it to be the school’s first team as a quarter back. We are currently in the same school though different classes but share every opportunity in between the lessons and available free time to chat and share jokes. Personality From the above brief description, my two friends have very distinct personalities. George is more...
3 Pages (750 words) Essay

... Compare and contrast Spring and Fall There is a certain charm and quality to a Spring day that is missing from the season of Fall. There is the feeling of lightness and life during the months of spring, it is apparent in the scent of lilacs and can be seen in the myriad of flowers coming into bloom and plants putting on their verdant dresses of green. The warmth in the air is tempered occasionally by a cooling breeze and the sounds of birds singing their songs of creation abound. Even the word “Spring” has a sense of liveliness, energy and effervescence. Phrases like “Spring Ahead” come to mind as positive reinforcements of this season. The word “Fall” on the other hand (need I say more), connotes perhaps a “Fall from Grace... Compare and ...
2 Pages (500 words) Essay

...Full Comparison and Contrast of Beliefs in Literature Life has many challenges and men from the ancient world to these modern times expressed their convictions about the facts of life. For some, they come in the form of stories while others express their thoughts in persuasive manners. No matter how one conveys his thoughts, an individual’s beliefs and reasoning are portrayed in the words and images created through the forms used. One could be how people perceive God, how many gods they believe in and the effects of their beliefs in their lives as shown in the essay of Thomas Malthus on the principle of population and The Epic of Gilgamesh. The former believes in one God, reflecting the monotheistic nature of Christianity while the latter...
4 Pages (1000 words) Essay

... to fill up the gap in our education system and in the workplace Education is very important Ways should be found to get people interested in education Education is one of the most important things in the world today; in fact, it is considered a basic human right by most international organizations. In this paper, we shall look at two articles with different approaches to education and we shall compare these approaches to each other. In this paper, we shall compare the different approaches that these two authors have suggested as a remedy for filling up the gaps in education both in the workplace and at school. We shall look at the following: an approach to education, failures in the education system, and finally, the actions to be taken...
6 Pages (1500 words) Essay

... habit. For example, a person may decide that starting today; they will never smoke, and then stick to their decision. Secondly, a person may break a bad habit by tapering off, which highly bases on harm reduction. Bad habits result in harm, so one may choose to reduce the harm by reducing the number of times they engage in the bad habit. A person will start cutting back on the bad habit, like gradually rolling back the bad habit until it finally disappears completely. For example, a smoker used to five cigarettes daily may decide to smoke only two, then one, and finally quit smoking. The two ways present different conditions, so one may choose depending on how well they can cope. Comparing the two, abstinence may be harsh and hard...
1 Pages (250 words) Essay

..., and utilize male sexual energy as a distraction for what is taking place behind the scenes. Furthermore, the representation of class is one in which the viewer comes to the realization that the moneyed aristocracy/bureaucracy is the only mechanism through which the average societal stakeholder can hope to get ahead. As a direct result of this realization and portrayal, the protagonists of the film find it necessary to ingratiate themselves with these individuals as a means of pursuing this dream. Interestingly, the second film that will be discussed within this comparison and contrast, “All about My Mother”, represents a differential between those individuals that live within the provinces and those that live within Madrid. Furthermore...
2 Pages (500 words) Essay

Jiaxia Liu English 101 Carl Waluconis Essay #4 Worth the Challenge Introduction Writing is a serious business and by no means an easy task. Moreover,being an international student it appears to be all the more challenging since there are major differences between the Chinese and English usage of words and grammar. Though the first two years at college were rather challenging, yet my close association with the language has served to improve my abilities of English usage to a great extent.
As an international student and with Chinese as my mother – tongue, I was not too confident about my skills of speaking and writing because I found major differences between the English and Chinese languages. Though I love writing, yet I used t...
2 Pages (500 words) Essay

... and meaning. In that way death works in entirely different angles in a short story "A good man is hard to find" by Flannery O’Connor and a poem "Because I could not stop for Death” written by Emily Dickson, which open to the reader not only the contrast between life and death in that very final moment, but express its essence and the nature of its main action, when the last breathing-out flies of a human’s body. To begin with it must be said that for the whole understanding of the death concept represented in analyzed works, there is a great importance of comparison of two isolated examples of death depiction. Firstly, let’s see how it appears in Flannery O’Connor’s "A good man is hard to find". Seemingly its hard to predict...
5 Pages (1250 words) Essay
sponsored ads
Save Your Time for More Important Things
Let us write or edit the research paper on your topic "Compare and Contrast of Renaissance Furniture" with a personal 20% discount.
GRAB THE BEST PAPER

Let us find you another Research Paper on topic Compare and Contrast of Renaissance Furniture for FREE!