Comments (0)
Add to wishlistDelete from wishlist
Cite this document
Summary
Americans have put patriotism in their heart and have always thrived not to sit back and watch as others struggle, but to be involved in the economic…
Download full paperFile format: .doc, available for editing
HIDE THIS PAPERGRAB THE BEST PAPER93.8% of users find it useful 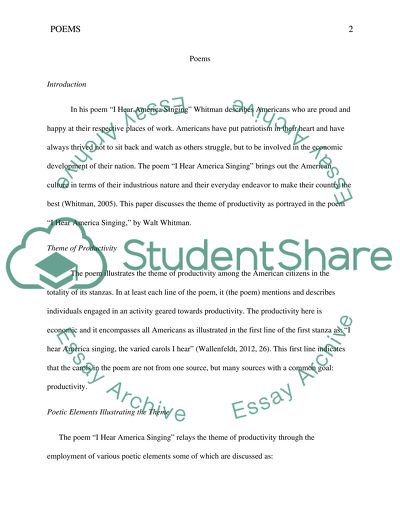 Analysis of Poems Poems Introduction In his poem “I Hear America Singing” Whitman describes Americans who are proud and happyat their respective places of work. Americans have put patriotism in their heart and have always thrived not to sit back and watch as others struggle, but to be involved in the economic development of their nation. The poem “I Hear America Singing” brings out the American culture in terms of their industrious nature and their everyday endeavor to make their country the best (Whitman, 2005). This paper discusses the theme of productivity as portrayed in the poem “I Hear America Singing,” by Walt Whitman.
Theme of Productivity
The poem illustrates the theme of productivity among the American citizens in the totality of its stanzas. In at least each line of the poem, it (the poem) mentions and describes individuals engaged in an activity geared towards productivity. The productivity here is economic and it encompasses all Americans as illustrated in the first line of the first stanza as: “I hear America singing, the varied carols I hear” (Wallenfeldt, 2012, 26). This first line indicates that the carols in the poem are not from one source, but many sources with a common goal: productivity.
Poetic Elements Illustrating the Theme
The poem “I Hear America Singing” relays the theme of productivity through the employment of various poetic elements some of which are discussed as:
Repetitions
The poem “I hear America Singing” has deployed a huge use of repetition to add more weight and emphasis on the theme. The clause “makes ready for work, or leaves off work,” in the 4th line brings out the repeated word “work”. The word “work” in this line informs that productivity here is achieved only through physical involvement in jobs (Wallenfeldt, 2012, 26). Moreover, the “singing” has been repeated to put emphasis on how Americans enjoy any practice of productivity they are involved in.
Imagery
Exploration of the reader’s emotions is the most critical part of a poem and what better way to do it by employment of imagery? In the poem “I hear America Singing” imagery has been employed to reach the needed emotional attachment between the reader and the poem. The line “The shoemaker singing as he sits on his bench, the hatter singing as he stands,” brings an image to the reader’s mind making them understand the flow and the meaning of the poem (Oliver, 2006, 97).
Rhythm
“I hear America Singing” is a poem showcases great flow of ideas coupled with a fine language use which describes its rhythmic details. Each line in the poem conveys similar information, but only with great emphasis for instance “The delicious singing of the mother, or of the young wife at work”, each line has an ideological connection with the previous and the following lines (Oliver, 2006, 97). The rhythm eases understanding of the poem as well as making it interesting.
The Poem and the Reader
More often, the poems do not use direct language to relay their various messages and the poem “I hear America Singing” is not left out. With the main theme as productivity, the poem employs stylistic devices that somehow bring the real meaning from a distant. The “singing” the “work” brings out the thematic impression (Oliver, 2006, 97). The reader’s emotional insight is exploited in the poem which makes it easy for any reader to feel as part of the poem during and after their readership.
Conclusion
The approaches used in the exploration of a poem can virtually lead to understanding the reality involved in the message that the poem might be relaying. Understanding the poem “I hear America Singing” can be involved depending on the approach a reader takes. However, from the point of view of productivity, the poem directly communicates with the reader. Therefore, Whiteman’s reflection on the theme of productivity portrays his poetic expertise in a bid to immerse the reader’s ruminative aspects to comprehend the subject matter.
References
Oliver, C. M. (2006). Critical companion to Walt Whitman: A literary reference to his life and work. New York: Facts on File.
Wallenfeldt, J. H. (2012). From democracys roots of a country divided: America from 1816 to 1850. New York: Britannica Educational Pub., in association with Rosen Educational Services.
Whitman, W. (2005). I hear America singing. Retrieved on 20 June 2014 from http://www.poetry.org/whitman.htm. Read More
Share:
Tags
Cite this document
(“POEMS Essay Example | Topics and Well Written Essays - 500 words”, n.d.)
POEMS Essay Example | Topics and Well Written Essays - 500 words. Retrieved from https://studentshare.org/english/1650438-poems

CHECK THESE SAMPLES OF POEMS

... Poems Earlier in the poem, the speaker details the vision of Xanadu as inspired by the damsel’s song. In that respect, itmay be argued that the speaker highlights that he wishes to adopt Kubla Khan’s own personality and become the emperor himself. The speaker envisions himself as a powerful personality that is spoken by everyone who surrounds him. This is seen in the preceding stanzas where Coleridge (49-50) states, ‘and all who heard should see them there, and all should cry, Beware! Beware!’ Alternatively, the speaker desires to be the demon lover, who was earlier sought after by the woman haunting the garden, in his altered state of consciousness (Coleridge 15). These perspectives are reinforced by the mythical approach that Coleridge...
3 Pages(750 words)Essay

.... Their poems "The Passionate Shepherd to His Love" and "The Nymph's Reply to the Shepherd" give readers a brief but thorough tour of all that is best words of the contemporary pastoral tradition in poetry. Whether these two poems are successful as companion poems is evident from the literary and academic interest still existing. Christopher Marlowe was best known for play writing and among Elizabethan playwrights he is considered second only to Shakespeare. Sir Walter Ralegh (1552-1618) was a true man of renaissance, capable courtier, able explorer and colonizer, and a talented writer of the Elizabethan Era. (Ralegh). Among the few poems of Ralegh "The Nymph's Reply to the Shepherd" is most popular and often reprinted along with Marlow's...
4 Pages(1000 words)Book Report/Review

... 03 September 2007 Poems Sonnet 73 In this sonnet written by William Shakespeare, the speaker makes use of intensive metaphor to talk about his old age. It should be noted that old age has been compared to autumn where the “leaves are yellow, or none, or few do hand,” to the end of the day when “sweet birds sang,” and “after sunset fadeth in the west,” and to the remnants of the fire which is slowly “consum’d with that which it was nourished by.” In the last two lines of the sonnet, the speaker tells his lover that he/she must perceive this old age and that he/she must love him/her more with the knowledge that the speaker will soon be forever gone. To Autumn John Keat’s poem entitled To Autumn illustrates this season with three...
2 Pages(500 words)Essay

...English Literature Doha AlEssa & Shekha AlMndeel 17 Dec The Legend of Provence by Adelaide Procter uses a strong religious and emotional theme, about a young woman who leaves her childhood upbringing in a convent to follow first romantic love. These actions were out of the ordinary at the time that this poem was written and severely frowned upon though the idea of ‘fallen woman’ reclaiming there original place in society was becoming very popular among women poets (Hickok).This may be even considered early feminism. Strong Christian religious devotion is evident in the character’s attitude and desire to return to the convent after she had left, where she spent the remainder of her life. Divine intervention and God’s undying and complete...
2 Pages(500 words)Essay

... female; admonition & eulogy; injustice & hardship; and the wandering male; among others. More so, there are several differences and similarities emanate from the prosody like rhyme; tonal patterning; and systematic rhythm. The poem share common characteristics from two perspectives: that of a lonely female in her marriage longing for her lover; and that of a male who, forced to relocate miles away, perceives his life as a continuous journey. Consequently, the three poems from the Nineteen Old Poems feature diction in terms of rhyming and alliterative biome; animating words & structuring; and allusion. In addition, most of the poems in the 19 old poems describe confused political situation that contributed to miseries for the lower...
9 Pages(2250 words)Essay

... Poems Poems are a unique type of composition developed to express certain ideas, emotions, imaginations, and experiences in such a manner that particular information is relayed to the audience. They are usually use different literary techniques that bring about a particular pattern of rhyme, metaphors and other techniques. One differentiating characteristic of poems from other pieces of writing is that poems are written in verses rather than prose. In poem analysis, various aspects need to be tackled. These include the voice, situation, setting, theme, and tone among other literal techniques. Based on this perspective, the paper analyses two poems, “We real cool” by Gwendolyn Brooks, and “The schooner flight” by Derek Walcott...
2 Pages(500 words)Essay

...Section 1. Why is the narrator "looking backward" according to section I? What other reason might one have to look backward on ones war experiences? -- In the context of the poem, the opening scene tells us that there is a new war raging in the country of the elderly man. He is somehow still involved in this battle, as a wound dresser / volunteer at a war hospital which is why he has come across these new faces of battle scarred and worn soldiers. He cannot help but see his younger self , as a soldier in their faces. Thus his experience of looking back during the time when he too served his country in a previous war. -- Upon hindsight, one may look back upon a previous war experience to recall the bravery of the past soldiers and wonder...
19 Pages(4750 words)Assignment

Essentially, Montresor aims to be the jury, a judge, and executioner. Montresor hates Fortunato because the latter had caused many injuries to the former. Due to jealousy, Montresor endeavors to attack Fortunato by skillfully employing a reverse psychology. Notably, Montresor constantly indicates that he has the capacity to ask Luchesi to observe Amontillado although Fortunate detests the obscene scene, and claims that Luchesi does not have the ability to tell Amontillado from Sherry (Poe 745). The audience knows that Montresor is jealous of Fortunato. In order to complete his revenge mission, Montresor tricks Fortunate into coming to his catacombs in order to taste some Amontillado, which is non-existent.
Jealousy drives Mont...
5 Pages(1250 words)Essay

...Poems The Spring of Youth Q1 Sight Sound Smell Touch The snow melted Slapping lake-water Scenting The hot sun The ice broke Noisily taking leave Muscles taut Sweat dripping from my face Ice broke Sweat dripping from my face Slapping lake-water dragging Ice The use of imagery is imbalance with the poet using more of sense of sound, sight and touch than smell. The setting could have influenced the poetry’s element of imagery where the poet used sense of smell to implore the remembrance of the gone days where “scenting of game in hot sun” appeals to sense touch in combination of ice that appeal to the very sense of touch though in direct opposite way. The dominant imagery in this poem revolve around sense of sight, sound, and touch while...
3 Pages(750 words)Coursework
sponsored ads
Save Your Time for More Important Things
Let us write or edit the essay on your topic "POEMS" with a personal 20% discount.
GRAB THE BEST PAPER

Let us find you another Essay on topic POEMS for FREE!