Comments (0)
Add to wishlistDelete from wishlist
Cite this document
Summary
Henry , it seems to be third person omniscient according to what we have learnt in chapter 5. Third person omniscient as we have gained is when the narrator gives the impression of the story…
Download full paperFile format: .doc, available for editing
HIDE THIS PAPERGRAB THE BEST PAPER94% of users find it useful 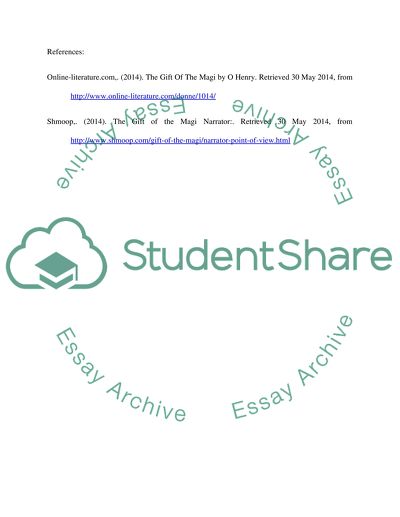 Analyzing Point of view Theoretically, in short story” The gift of Magi” put in black and white by O. Henry , it seems to be third person omniscient according to what we have learnt in chapter 5. Third person omniscient as we have gained is when the narrator gives the impression of the story externally and then relates to the characters. This is what happening in “The Gift of Magi” where we do not see what Jim is doing during the story but still he chooses Jim to tell the part of the story.
As for me narrator’s point of view in the whole short story adopts to be consistent as he possess single approach in the whole story but at single point in last paragraph the narrator speaks to the reader unswervingly with some words of insight concerning how both Jim and Della were wise among other gift exchangers because they behaved highly selflessly to each other.
The point of view helps in shaping my reading as it describes the life style, the position of the characters and moods. Also the author describes the setting of winter in New York by portraying everything dull and drably and yet he talks about Christmas in his tale. He does not even talk about any snow on ground and it seems that O. Henry sometimes deviates you from story when the details are discussed. As in one instance he described the door bell so profoundly at the access way to Jim and Della’s flat.
I captured the theme of story as all about love and being altruistic during tough times in life. But in end they both exchanged the best and most valuable Christmas gifts of all times.
References:
Online-literature.com,. (2014). The Gift Of The Magi by O Henry. Retrieved 30 May 2014, from http://www.online-literature.com/donne/1014/
Shmoop,. (2014). The Gift of the Magi Narrator:. Retrieved 30 May 2014, from http://www.shmoop.com/gift-of-the-magi/narrator-point-of-view.html Read More
Share:
Tags
Cite this document
(“Analyzing Point of View Assignment Example | Topics and Well Written Essays - 250 words”, n.d.)
Analyzing Point of View Assignment Example | Topics and Well Written Essays - 250 words. Retrieved from https://studentshare.org/english/1648221-analyzing-point-of-view

CHECK THESE SAMPLES OF Analyzing Point of View

...? POINT OF VIEW Short stories do not typically allow the much time to establish important literary elements. But a good will work with what he or she has. One of the most important elements in a story is the point of view. Without it, the reader is disoriented. They need to understand how to approach the story and accept the characters in the story. There are a number of types of points of view, but here I will focus on the limited omniscience point of view used in Guy Maupassant's The Necklace. The point of view in this interesting story is consistent throughout. This is a good thing because if the point of view is not consistent the reader can be very confused. They will have a hard time understanding who knows what. This story... is...
1 Pages(250 words)Research Paper

...worked. As the sky grew brighter I could see things that I never have seen before. But while I stood here amazed at what I’m seeing, the sound of a siren broke the silence, and I dashed towards an opening leading to freedom. Suddenly, the siren stopped as and my heart pounded hard. The emerging guards bolted the metallic doors shut as a bright ball of light came into view. I looked back behind me, and in a flash I threw a dagger that hit Seth’s breast. He shouted with pain and I took the chance to run as far as I could, disappearing in the southern forest. They say that the southern forest is peaceful and that is exactly what I saw. In here there are things that have never been heard of: goblins, fairies, and other...
2 Pages(500 words)Essay

...?In O Henry’s famous short story “The Gift of the Magi” there are numerous examples of how point of view is used and manipulated not just to tell a story but also in influencing the reader. Point of view is crucial to the author as a tool of creating reader sympathy. A change in the text’s point of view can alter its entire meaning. An ironic commentary for instance can be mistaken for an uncritical observation if the irony is not marked. In “The Gift of the Magi”, the narration is in a third-person mode. The narrator is largely objective, recounting details of the Youngs’ life without too many subjective reactions. And yet, at times, the narrator uses an omniscient mode to point out certain things to the reader that are unnoticed... by the...
2 Pages(500 words)Essay

...?Point of View Terrible Airplane Ride Across the Atlantic Ocean As the airplane left the ground and the loud sound of babies crying began, it was clear that the flight was going to be trying. The seats were bunched next to each other like eggs in a carton. The plane was not a traditional airliner, but a low cost facsimile. This was made entirely evident as the airplane oftentimes shook and one wondered if the very nuts and bolts that held the jet together would unravel themselves and the very machine crash and fall to pieces over the ocean. The sounds of other passengers seemed to carry exceptionally well, as every unsettling conversation, complaint, and sick passenger could be heard. As the stewardess...
2 Pages(500 words)Essay

...An Occurrence at Owl Creek Bridge” The first and last scene of “An Occurrence at Owl Creek Bridge” would be shot on a railway bridge in a rural area, with a stream deep enough for a man to be submerged and carried down stream under the bridge. I would want to shoot Peyton Farquhar in Civil War planter’s clothes, with his hands tied behind his back and a noose around his neck. Two Union soldiers would be on the bridge beside him. In the thick foliage by the bridge a cannon should be placed. Farquhar should be shown in a thoughtful manner. The scene would fade into a discussion with a Confederate soldier. The Confederate soldier would tell Farquhar that the Owl Creek Bridge had been taken, but if someone lit old driftwood... Occurrence...
2 Pages(500 words)Essay

...Topic: Short Story: Forbidden Love on a South African Farm. Lecturer: Forbiden love The short story is told from the omniscient third point of view. This is evident from the opening of the short story. The narrator seems to have a great knowledge of what he/she is talking, the black Thebedi and white Paulus growing up from their childhood, the narrator describes how in their childhood the girl had shown Paulus how to make clay oxen. A clear description is given out by the narrator of Paulus and Thebedi education background, physical appearance, daily lives and much more of their lives. The narrator gives instances of their childhood when they played, gave stories and even made love at points, which was forbidden. The two grow... up to...
1 Pages(250 words)Essay

Let us find you another Assignment on topic Analyzing Point of View for FREE!