Comments (0)
Add to wishlistDelete from wishlist
Cite this document
Summary
Between these years protests were experienced across the world and they always hit the news headlines whenever they occurred. From 1990…
Download full paperFile format: .doc, available for editing
HIDE THIS PAPERGRAB THE BEST PAPER97.6% of users find it useful 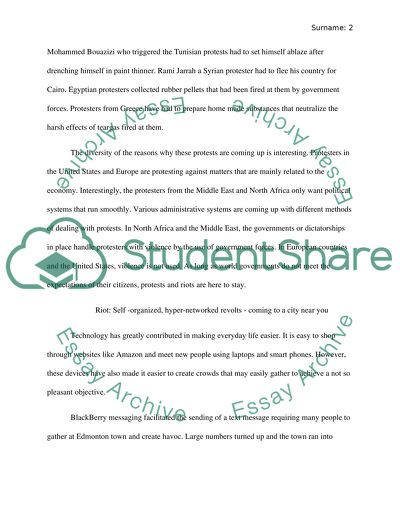 The Protester In the early years from the 1960’s to 1980’s, protests were a fashionable way to express the opinions of the masses across the world. Between these years protests were experienced across the world and they always hit the news headlines whenever they occurred. From 1990 protests were no longer seen as the right method of expression by the masses except in few places like South Africa where a combination of sanctions and protests helped to end apartheid. For the next two decades, the world experienced a tremendous improvement in living standards.
As the world embraced a society of zero protests and riots, the situation suddenly changed. It all began in Tunisia, a country in North Africa. The protests began when a street vendor named Mohamed Bouazizi set himself ablaze following repeated harassment by Police officers while the state just ignored. The protesters demanded the removal of their National leader. Protests also flared in Egypt following a fraudulent election. In the United States protests were triggered by economic crises while, in Russia, the citizens protested against the leadership of Vladimir Putin. Protests have also occurred in Madrid, London, Athens, India and Chile.
These protests have not come without a heavy price paid by the protesters. Ahmed Harara an Egyptian protester got blinded by rubber bullets that hit his eyes in two different occasions. Mohammed Bouazizi who triggered the Tunisian protests had to set himself ablaze after drenching himself in paint thinner. Rami Jarrah a Syrian protester had to flee his country for Cairo. Egyptian protesters collected rubber pellets that had been fired at them by government forces. Protesters from Greece have had to prepare home made substances that neutralize the harsh effects of teargas fired at them.
The diversity of the reasons why these protests are coming up is interesting. Protesters in the United States and Europe are protesting against matters that are mainly related to the economy. Interestingly, the protesters from the Middle East and North Africa only want political systems that run smoothly. Various administrative systems are coming up with different methods of dealing with protests. In North Africa and the Middle East, the governments or dictatorships in place handle protesters with violence by the use of government forces. In European countries and the United States, violence is not used. As long as world governments do not meet the expectations of their citizens, protests and riots are here to stay.
Riot: Self -organized, hyper-networked revolts - coming to a city near you
Technology has greatly contributed in making everyday life easier. It is easy to shop through websites like Amazon and meet new people using laptops and smart phones. However, these devices have also made it easier to create crowds that may easily gather to achieve a not so pleasant objective.
BlackBerry messaging facilitated the sending of a text message requiring many people to gather at Edmonton town and create havoc. Large numbers turned up and the town ran into chaos. Technology has enabled the formation of flash mobs that suddenly gather at a point and perform their ill missions without warning.
Stott, a psychology lecturer, believes that the crowd is never on its own. Crowd members have a shared identity which changes as the situation changes. Although the actions of the crowd may not make sense to a by-stander, they do make sense to the crowd members. Poor policing should be blamed according to Stott. Initially, when a crowd forms, the shared identity is crowd legitimacy. It is the extent to which the crowd feels that it has to behave lawfully. However with reference to crowds which form through technology, the level of legitimacy is usually low. The crowd knows that it is supposed to cause havoc.
Power is another factor in crowd violence. Crowd members take to the streets without fear of punishment because they are many. They cause mayhem in the streets without fear of arrest and persecution.
Social media has also greatly contributed towards crowd formation. Crowds formed through social media readily create havoc if the members were informed to do so before assembly. From this perspective, social media has been viewed by many people as a very effective tool to create societal disorder.
It is interesting that Police departments have been unable to deal efficiently with the crowd menace yet it is their duty. One of the options available to the police is to curtail the teleportation technology and commandeer it. This option is not applicable since it will involve infringement of people’s privacy. Another option is to monitor social media. However due to financial problems in police departments and sophisticated technology this is not a viable option. The last option is to ban technologies like the BlackBerry Messaging service. However, this will have the counter effect of making it hard for security forces to communicate. They are already using such technology. As long as freedom of assembly remains, the freedom to form crowds will also remain. The authorities have to come up with effective means to counter violent crowds.

CHECK THESE SAMPLES OF Response/ Summary

...Teacher’s ID Summary/ Response Summary In her article “Children need to play, not compete”, Jessica Statsky (n.p) asserts that organized sports for children in between the age of six and twelve puts unrequired physical and psychological pressure on these young children”. According to the writer, the organized sports are injurious as children cannot meet standards set for and by adult sports. Secondly, the games requires physical abilities that are not even developed within this age bracket. Hence, the game patterns can assert harmful impacts on growing bodies by increasing the chance of injuries with lifelong impact. The writer also explains that beside other physical injuries, children...
3 Pages(750 words)Essay

...? CHILDREN NEED TO PLAY, NOT COMPETE Summary: Jessica Statsky in her writing “Children Need to play, Not Compete” emphasized on the fact that the children become a part of the sports like baseball, football in an inappropriate way. They are knowing or unknowing pushed into the sports activities which is not up to their standard and build up a hazardous effect over them which can be detrimental in their overall growth process. Sports, as per Statsky, have been treated as an area to complete rather taking it as learning or any other co curriculum activities. She criticized the organizational committee and the parents to put their children in the competition league which creates a fearfulness, low esteem and physical hazards...
3 Pages(750 words)Essay

...? Summary and Response: Children Need to Play, Not to Compete In the essay “Children Need to Play, Not to Compete” Jessica Statsky focuses on mental and physical impacts of organized competitive sports on children of six to twelve year (O'Connor and Braverman 25-26). She states that organized competitive sports harms children physically and psychologically. In the essay, she uses an example of a child of twelve years child was injured while throwing a curve ball. Though the child has not been injured, but he was mentally affected. Furthermore, children engaged in competitive sports are inclined to win. They consider sports as a matter of victory; children who lose are the victim of depression and...
3 Pages(750 words)Essay

Racism in Central America against the indigenous population

...W131 Writing Project #2 Draft Aye Nu Duerksen October 16, 2009 Facebook Revisited: A Summary/Strong Response Essay IntroductionThe development of the World Wide Web changed the course of communication and computer technology spanning a diversity of people and cultures. The benefits given are so enormous and innovative that the generation today could not imagine a world without it. There are numerous sites which support social or electronic gathering depending on the purpose of the user. One of the most phenomenally successful social sites is Facebook. Facebook, MySpace and Bebo are known as the three most famous social networking websites from more than 140 notable, well known sites. One can just...
4 Pages(1000 words)Essay

... “Children Need to Play, not Compete,” by Jessica Statsky: An Evaluation. Christine Romano Romano’s evaluation of Statsky’s argument essay is so effective, that it obviously deserves to be used as a text book example of literary analysis. Romano clearly states Statsky’s thesis, lists the criteria which she proposes to use to evaluate Statsky’s arguments, and then highlights the weaknesses in Statsky’s stand. This step-by-step logical approach makes Romano’s writing very convincing and easy to follow. It is almost surgically precise. This writing has a lot to recommend to other readers. The main attraction is Romano’s balanced approach to Statsky’s essay. Romano lists both “strengths and weaknesses” (Romano, 405) of Statsky’s... “Children...
1 Pages(250 words)Essay

... Children Need to Play, Not Compete In “Children Need to Play, Not Compete” Jessica Statsky displayed her deep emotions towards a then prevailing issue, in writing. The masterpiece of writing reveals more and more about children’s competitive sports for and in her course of composition. Prior research revealed that over the past couple of decades, organized sports, specifically for the children, had increased in the United States. All the people, mostly parents and young kids concerned, received this with dire joy. It created room and an opportunity for growing children to develop in fitness as well as nurture young talent. However, shortcomings displayed a different perspective of the whole issue. The entire project was subject... Children...
1 Pages(250 words)Essay

...Summary and response: Born digital Summary Palfrey John and Gasser Urs ed the article, ‘born digital: Understanding the first generation of digital natives.’ The authors reports on the technology change across generations with focus on the difference between the current generation and the older generation. The authors identify three categories of people, the digital natives, digital immigrants, and digital settlers, and effects of contemporary state of technology on each group. Ooverreliance on technology, according to the authors, is a major and common trait of the digital natives, the young generation that is born after the year 1980 and grew with the contemporary technology. They spend...
2 Pages(500 words)Essay

...Summary and response Summary Galanes ed the article, ‘Anger management,’ which the New York Times published on September 29, The reports on people’s personal reactions to experiences and response to the reactions. A woman holds a grudge against her neighbor because the neighbor refused to invite the woman’s daughter to birthday’s parties. The woman wants to retaliate by not inviting the neighbor to a party but she is advised otherwise. The author also advises a party, who received a carton of cigarettes, not to donate them to people, even if the possible targets are consumers or sellers of the commodity. To a party who contemplates reporting a co-worker for...
1 Pages(250 words)Assignment

...Summary and Response Summary and Response In the article, “The Tragedy of Native American Youth Suicide”, the Byron l. Dorgan, maintains that the rates of teen suicide being experienced among the Alaska and Indian communities have reached disturbing levels. These communities constitute the highest suicide rates as compared to the national average. The most affected age groups are between 15 and 19 years. Considering this issue, the involved parties that include the Indian tribes, health professionals, and the American Federal government must coordinate efforts so as to help in eradicating this problem. According to Doran’s article, the environment and the lifestyle in...
1 Pages(250 words)Essay
sponsored ads
Save Your Time for More Important Things
Let us write or edit the essay on your topic "Response/ Summary" with a personal 20% discount.
GRAB THE BEST PAPER

Let us find you another Essay on topic Response/ Summary for FREE!