Comments (0)
Add to wishlistDelete from wishlist
Cite this document
Summary
In doing this, the paper defines social justice and the pattern of distribution of resources in the society. Additionally the paper discusses the position of deaf students in the society, their…
Download full paperFile format: .doc, available for editing
HIDE THIS PAPERGRAB THE BEST PAPER98.6% of users find it useful 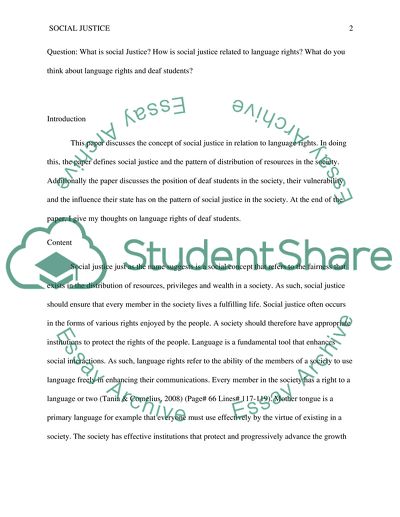 Social justice Question: What is social Justice? How is social justice related to language rights? What do you think about language rights and deaf students?
Introduction
This paper discusses the concept of social justice in relation to language rights. In doing this, the paper defines social justice and the pattern of distribution of resources in the society. Additionally the paper discusses the position of deaf students in the society, their vulnerability and the influence their state has on the pattern of social justice in the society. At the end of the paper, I give my thoughts on language rights of deaf students.
Content
Social justice just as the name suggests is a social concept that refers to the fairness that exists in the distribution of resources, privileges and wealth in a society. As such, social justice should ensure that every member in the society lives a fulfilling life. Social justice often occurs in the forms of various rights enjoyed by the people. A society should therefore have appropriate institutions to protect the rights of the people. Language is a fundamental tool that enhances social interactions. As such, language rights refer to the ability of the members of a society to use language freely in enhancing their communications. Every member in the society has a right to a language or two (Tania & Cornelius, 2008) (Page# 66 Lines# 117-119). Mother tongue is a primary language for example that everyone must use effectively by the virtue of existing in a society. The society has effective institutions that protect and progressively advance the growth of languages. From the family institution to schools among other similar institutions, people learn and perfect their skills in various languages thereby enhancing their communication skills.
While able-bodied individuals enjoy expressive use of language, the deaf on the other hand remain marginalized and their language rights often ignored. Deaf people constitute a vulnerable minority group in the society. Most societies do not always consider and safeguard their language rights. The deaf communicate in signs and symbols. Deaf students therefore go to special schools where they learn how to communicate in their special languages. They therefore become proficient communicators but only with other deaf individuals. The able-bodied individuals in the society often do not strive to learn the sign language a feature that develops a primary incompatibility in communication thus communication breakdown. Deaf children born of deaf parents learn the language from their parents and therefore enjoy effective communication from early ages. In fact, such children develop faster than normal children born of deaf parents do (Bouvet, 2014) (Page# 124 Lines# 10-12). This arises from the fact that such children lack a person to teach them language.
Summary
In retrospect, language is an essential aspect of the society that enjoys effective protection through the various institutions. However, language rights of the deaf remain limited in most societies owing to their vulnerability. The fact that rest of the society does not learn sign language makes it difficult for the deaf to communicate with the rest of the society. Their ability and right to the use of language thus remains ineffective even with literate deaf people (Mulhke, 2000) (Page# 722 Lines# 8-12). In such circumstances, the deaf remain marginalized.
References
Bouvet, D. (2014). The Path to Language : Bilingual Education for Deaf Children. New York: EBSCO Publishing.
Mulhke, M. A. (2000). The right to language and linguistic development: Deafness from a human rights perspective. Virginia journal of international law. 40: 705.
Tania, H. & Cornelius, B. P. (2008). Language rights: a framework for ensuring social equity in planning and implementing national-education policies. New Horizons in education, Vol 56, No. 3. Read More
Share:
Tags
Cite this document
(“Social justice Assignment Example | Topics and Well Written Essays - 500 words - 1”, n.d.)
Social justice Assignment Example | Topics and Well Written Essays - 500 words - 1. Retrieved from https://studentshare.org/education/1663318-social-justice

CHECK THESE SAMPLES OF Social justice

...? Social Justice and its Outcomes for the Disabled: Totara Park Riding BY YOU YOUR SCHOOL INFO HERE HERE Social Justice and its Outcomes for theDisabled: Totara Park Riding “I am only one, but I am one. I cannot do everything, but I can do something. And I will not let what I cannot do interfere with what I can do” (Edward Hale, 1902). Introduction Social justice theory affirms that all individuals in society are entitled to recognition of their personal rights and liberties. John Rawls, a notable social theorist, argued that rights were a sacred and inviolable guarantee afforded to everyone in society, never to be...
10 Pages(2500 words)Term Paper

...? Social justice and advocacy Social justice and advocacy Societies are engulfed in various issues that affectpeople’s wellbeing in various ways, specifically psychologically, economically and socially. As societies increasingly become modernized, these issues also become complex, requiring sophisticated remedies. Counseling has been useful in helping people cope with some of these issues. Previously, counselors only focused on counseling and helping their clients handle issues they faced. However, with time, they realized that it was equally important to find strategies of preventing the issues from recurring in future. With this realization, counseling...
6 Pages(1500 words)Essay

...﻿ Defining Social Justice The concept of social justice has many different facets. This is shown through the various kinds of definition this concept is given. However, although its definitions vary, these have a similar ideological background. Overall, many people perceive the concept of social justice as the justice and fairness that overrides individual justice. This paper aims at exploring the concept of justice, including analysis the different definitions for this concept and comparing the degree to which these share a similar ideological basis. In order to establish that the...
4 Pages(1000 words)Research Paper

...?Henry Nabea # Social Justice # May Death Penalty The use of death penalty or capital punishment is one of the most controversial issues in Social Science studies. Scholars in social sciences are divided on whether or not the use of death penalty as a mean of punishing offenders is justifiable. One group of the scholars contend that death penalty is the most effective form of punishment for the criminals who have committed heinous crimes like murder and robbery with violence (Macdonald, 88). The other group of scholars, on the other hand, argue that death penalty is not an effective method of punishing the offenders and that the punishment does not lead to the intended...
9 Pages(2250 words)Essay

Challenges in Groups and Teams

...﻿Compare and contrast the work of John Rawls and Robert Nozick on social justice.  Introduction John Rawls and Robert Nozick are both philosophers who wrote widely on the subject of social justice and equality in the society. Clark (1994) says that the two academics held varied opinions especially on the subject of social justice in the society. In the 1970’s a number of theories on social justice were advanced but the works of two philosophers stood out and became the focal point of discussions among academics, economists and government bureaucrats. John Rawls advanced his arguments in his work “A theory of Justice”. In this book, Rawls attempts to challenge the widely accepted law of utilitarianism. He argues that justice... of an...
8 Pages(2000 words)Essay

...Introduction By virtue of human nature all individuals have social needs. The organization level of the society in terms of economics, education, politics and governance directly intercede on human dignity and societal common good. In the relation to the case study put forth about the Slinger family there are enormous discrepancies with respect to attainment of a justifiable social justice in the neighbourhood and beyond. Cases of job retrenchment as happened for Julie Slinger are self-indicators of lack of economic prowess and empowerment. A society not economically empowered relents to fraudulent means of sustaining their daily lives as seen when Julie had no other option but to go “on...
14 Pages(3500 words)Essay

...Building a Socially Just and Equitable Society. Social justice is no doubt at the centre of any debates that touching distribution of recourses and economic development. In America and the world over, people trying to figure out ways to overcome the ghost social inequalities and achieve an equitable society thus promote justice. This whole issue is broad and encompasses many issues that range from poverty, education levels, racial branding, access to medical care for the vulnerable and many others that promote inequality an hence injustice in our society. Such issues necessitate the need to relook our social status and strive to forge...
4 Pages(1000 words)Admission/Application Essay

...Social Justice Considering the definition of the modern day version of the social justice, it would be highly advisable toturn to the most influential international organization at the present moment – the United Nations. Thus, this body defines social justice as “the fair and compassionate distribution of the fruits of economic growth” (“Social Justice in an Open World”, 2006). However, the purpose of this concept may be defined not only through economic lenses (“to distribute economic growth”), but also to respect the human rights as well as potential (Palmer, 2012). From a broad point of view, the concept of social justice advocates the equality among the individuals who comprise the society. The above mentioned equality might... be...
2 Pages(500 words)Research Paper
sponsored ads
Save Your Time for More Important Things
Let us write or edit the assignment on your topic "Social justice" with a personal 20% discount.
GRAB THE BEST PAPER

Let us find you another Assignment on topic Social justice for FREE!