Comments (0)
Add to wishlistDelete from wishlist
Cite this document
Summary
First and foremost, the school philosophy was a co-educational day and boarding school for learners ranging between 3-19 years, which offers favorable and adaptable form of the…
Download full paperFile format: .doc, available for editing
HIDE THIS PAPERGRAB THE BEST PAPER95.4% of users find it useful 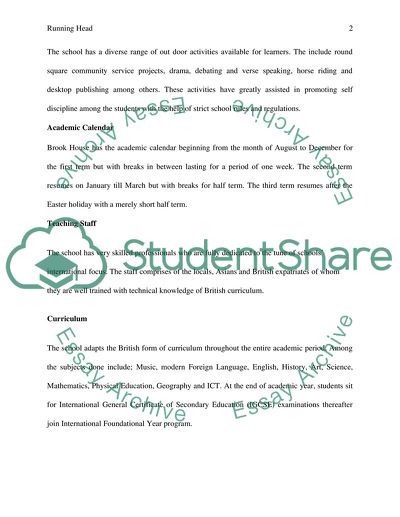 Number: Lecturer: During my interview, I managed to visit Brook house, a private school located in one of the big towns. First and foremost, the school philosophy was a co-educational day and boarding school for learners ranging between 3-19 years, which offers favorable and adaptable form of the British National Curriculum to the international and local learners.
Admission requirements
For entry, the academic year commences in late August for the first term. During this time, students are taken through a thorough interview basing on their previous academic records. For this, a lot of parents enroll their children as the overall performance is quite appraising.
Standardized test administered
This is one of the key features for the school. The test serves the following purposes: to identify the students’ potentials, to allow the teachers to give sound judgment on the scope and effectiveness of the course and finally assess on the whole accomplishment of the course. The school uses formal tests, homework, class work, field trips among others to constantly assess the students’ progress.
Extra-Curricular Activities
The school has a diverse range of out door activities available for learners. The include round square community service projects, drama, debating and verse speaking, horse riding and desktop publishing among others. These activities have greatly assisted in promoting self discipline among the students with the help of strict school rules and regulations.
Academic Calendar
Brook House has the academic calendar beginning from the month of August to December for the first term but with breaks in between lasting for a period of one week. The second term resumes on January till March but with breaks for half term. The third term resumes after the Easter holiday with a merely short half term.
Teaching Staff
The school has very skilled professionals who are fully dedicated to the tune of schools’ international focus. The staff comprises of the locals, Asians and British expatriates of whom they are well trained with technical knowledge of British curriculum.
Curriculum
The school adapts the British form of curriculum throughout the entire academic period. Among the subjects done include; Music, modern Foreign Language, English, History, Art, Science, Mathematics, Physical Education, Geography and ICT. At the end of academic year, students sit for International General Certificate of Secondary Education (IGCSE) examinations thereafter join International Foundational Year program.
The school is governed by board of directors who are well knowledgeable about the academic prospects of life. For smooth operation of the school, it is funded by local and international donors as well as students fees thus have enough budgets to run successfully.
Dressing code
The school uniform forms an integral part of school norm and ethics. It is mandatory for students to dress accordingly with the clothes clearly marked to avoid misplacement, theft or damage. On the other hand, other members of the staff have special attire worn accordingly to match the occasion.
Length of school day
The school is under operational for five days a week from Monday to Friday and classes starts from 8.15 am till 5.00 pm in the evening. It is guided by the timetable. The school has a lot of teachers to accommodate all the needs of the learners with the ratio of 1:15. Students therefore get enough attention to facilitate their learning.
Bibliography
Gabbitas, W. The Independent Schools Guide 2012-2013: A Fully Comprehensive Guide to Independent Education in the United Kingdom. UK: Kogan Page Publishers, 2013. Read More
Share:
Tags
Cite this document
(“Alternative Education Options Assignment Example | Topics and Well Written Essays - 500 words”, n.d.)
Alternative Education Options Assignment Example | Topics and Well Written Essays - 500 words. Retrieved from https://studentshare.org/education/1617226-alternative-education-options

Self-sensation is one of the basic human characteristics and humans develop it in the earliest stages of life. It is an awareness of those characteristics that form the personality of an individual. A child starts to realize the circumstances around him and begins to perceive different relations in a specific way. Self-sensation means to perceive and observe different behaviors of people. It is very difficult to change the self-sensation of a person in the later stages of life. Scientists, who have done research in this field, also believe that self-sensation can never be changed because it is formed in the earliest stages of a person’s life. The formation of self-sensation highly depends on the interaction between the child...
7 Pages(1750 words)Assignment
sponsored ads
Save Your Time for More Important Things
Let us write or edit the assignment on your topic "Alternative Education Options" with a personal 20% discount.
GRAB THE BEST PAPER

Let us find you another Assignment on topic Alternative Education Options for FREE!