Comments (0)
Add to wishlistDelete from wishlist
Cite this document
Summary
While Illinois once enjoyed a high rate of college graduation, enrollment, and affordability when compared to the rest of the country, a disturbing trend appears to be happening today. During the 21st century, there has been a consistent and substantial decline in performance…
Download full paperFile format: .doc, available for editing
HIDE THIS PAPERGRAB THE BEST PAPER98.4% of users find it useful 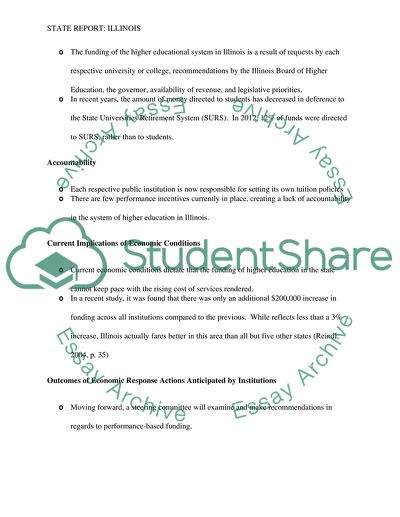 Report: Illinois Report: Illinois Current Economic Status of Higher Education at the Level While Illinois once enjoyed a high rate of college graduation, enrollment, and affordability when compared to the rest of the country, a disturbing trend appears to be happening today. During the 21st century, there has been a consistent and substantial decline in performance in regards to higher education when compared to America as a whole.
In the last decade, the average family income has decreased by seven percent, while tuition in higher educational institutions has increased 100%
Ten years ago, the average need-based aid distributed to Illinois residents amounted to $1,000, while today it stands at only $745 (Perna, et al., 2011).
Enrollment Trends
While high school graduation rates in Illinois have increased in the last decade, there has been an actual ten percent decline in university enrollment.
Enrollment at the state’s higher educational institutions has the following breakdown: 25% attend public universities, 43% attend community colleges, and 32% attend private colleges and universities.
Total enrollment in the past decade has grown nearly 12%.
The fastest growing segment of the student population comes from African-Americans and Hispanic/Latino families (Ikenberry, et al., 2008).
Funding Trends
The funding of the higher educational system in Illinois is a result of requests by each respective university or college, recommendations by the Illinois Board of Higher Education, the governor, availability of revenue, and legislative priorities.
In recent years, the amount of money directed to students has decreased in deference to the State Universities Retirement System (SURS). In 2012, 12% of funds were directed to SURS, rather than to students.
Accountability
Each respective public institution is now responsible for setting its own tuition policies
There are few performance incentives currently in place, creating a lack of accountability in the system of higher education in Illinois.
Current Implications of Economic Conditions
Current economic conditions dictate that the funding of higher education in the state cannot keep pace with the rising cost of services rendered.
In a recent study, it was found that there was only an additional $200,000 increase in funding across all institutions compared to the previous. While reflects less than a 3% increase, Illinois actually fares better in this area than all but five other states (Reindl, 2004, p. 35)
Outcomes of Economic Response Actions Anticipated by Institutions
Moving forward, a steering committee will examine and make recommendations in regards to performance-based funding.
According to Rogers (2012), “The Illinois Board of Higher Education will vote on the performance-based funding proposal to pool 0.5 percent of public university budgets and reallocate them based on the level of achievement in terms of certain metrics” (para. 1).

CHECK THESE SAMPLES OF Finance in higher Education(State Report:Illinois State )

On income, yet, many are of the opinion that their tax system is too complicated for understanding, bringing out supporting evidence and some even saying from the outlook of the people comparing the U.K. with other European countries and making their own standing.

Before now, the scheduler system was and was used for ages though abolished, if asked, it will definitely be for the development of the country putting in mind factors like, people are the force of the economy, so taxes imposed must be fair and reasonable which will not be too demanding on the people. The abolishing of the scheduler system has definitely brought difficulties and confusion since it was based on a “Category of treatment” but now it i...

... in the computations was based on a actual slope of the gauging station of the river at Abercynon. 3.2. Possible limitations of the design 3.2.1. The design did not include specifications for the length of the pipes because of insufficient data. 3.2.2. All the computations involving river flow velocity was based on the given 4 m/s in the project assignment brief. 3.2.3. River cross section shape and base width was also based on the given data from the project brief. 3.2.4. Modified rainfall and river height data were given as bases for the computations. 3.2.5. Data is too old (almost 11 years ago). Actual conditions may not anymore approximate current state of the hydrogeological parameters considered in the computations. 3.3. Diagram...
9 Pages(2250 words)Report

.... This was an unprecedented step made as an insurance bet against the probability that credit markets will dry up suddenly if there is another unexpected financial hiccup. However, this is a bit symptomatic of what ails G.E. today in that it has no clear-cut or strongly-worded strategy except a few statements about investing in growth areas like new products for the green movement. It has not crystallized what it wants to do about its organizational structure or the way it pursues business opportunities. What G.E. needs are new ways of looking at things besides acquiring new businesses and selling losing ones. It needs a paradigm shift. There is a certain disconnect between what GE is doing now (damage control) and the publicly-stated...
12 Pages(3000 words)Report
sponsored ads
Save Your Time for More Important Things
Let us write or edit the research paper on your topic "Finance in higher Education(State Report:Illinois State )" with a personal 20% discount.
GRAB THE BEST PAPER

Let us find you another Research Paper on topic Finance in higher Education(State Report:Illinois State ) for FREE!