Comments (0)
Add to wishlist Delete from wishlist
Cite this document
Summary
This research question needs to be answered in its original format. Several people comprehend common research theories like critical theory, professionalism theory and labeling theory among others, but fail to…
Download full paper File format: .doc, available for editing
HIDE THIS PAPERGRAB THE BEST PAPER98.4% of users find it useful 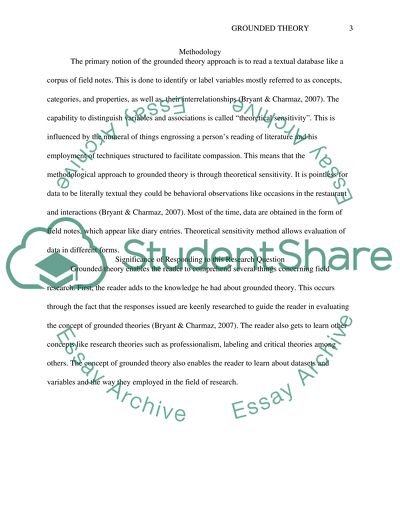 Grounded Theory MAE504 case 3 The selected research question for this case is grounded theory. This research question needs to be answered in its original format. Several people comprehend common research theories like critical theory, professionalism theory and labeling theory among others, but fail to understand ground theory (Bryant & Charmaz, 2007). This is because ground theory is viewed as a minor theory in research, but it is extremely essential in the field of research. Ground theory is a theory that is established inductively from quantity of data. If conducted well means the resulting theory at least corresponds one dataset excellently. This is identical to theory derived deductively from grand theory, without assistance of data. This could end up fitting no data at all. Grounded theory addresses the controversies brought about by other theories especially the grand theory, which people claim, is identical to grounded theory. While grand theory may end up fitting no data especially if it does not gain data assistance, grounded theory depends on nothing and assures a complete dataset (Bryant & Charmaz, 2007).
Theories supporting Grounded Theory
All research theories support grounded theory because they all fall under the same category. For example, grounded theory and grand theory are more or less the same because both of them address the issue of data. Both of them are employed in filling the databases from the outcomes established on the ground after an extensive research. Just, like the other research theories such as labeling and professionalism theories, grounded, theory takes a case other than viable perspective (Bryant & Charmaz, 2007). This makes differentiation of this perspective almost impossible. This shows that the researcher takes distinct cases to be complete, in which the variables interact as a unit to generate some outcomes. All the research theories employ case-oriented perspective in examining how variables interact.
Methodology
The primary notion of the grounded theory approach is to read a textual database like a corpus of field notes. This is done to identify or label variables mostly referred to as concepts, categories, and properties, as well as, their interrelationships (Bryant & Charmaz, 2007). The capability to distinguish variables and associations is called “theoretical sensitivity”. This is influenced by the numeral of things engrossing a person’s reading of literature and his employment of techniques structured to facilitate compassion. This means that the methodological approach to grounded theory is through theoretical sensitivity. It is pointless for data to be literally textual they could be behavioral observations like occasions in the restaurant and interactions (Bryant & Charmaz, 2007). Most of the time, data are obtained in the form of field notes, which appear like diary entries. Theoretical sensitivity method allows evaluation of data in different forms.
Significance of Responding to this Research Question
Grounded theory enables the reader to comprehend several things concerning field research. First, the reader adds to the knowledge he had about grounded theory. This occurs through the fact that the responses issued are keenly researched to guide the reader in evaluating the concept of grounded theories (Bryant & Charmaz, 2007). The reader also gets to learn other concepts like research theories such as professionalism, labeling and critical theories among others. The concept of grounded theory also enables the reader to learn about datasets and variables and the way they employed in the field of research.
Reference
Bryant, A., & Charmaz, K. (2007). The SAGE handbook of grounded theory. Los Angeles: SAGE. Read More
Share:
Tags
Cite this document
(“MAE504case3 Research Paper Example | Topics and Well Written Essays - 500 words”, n.d.)
MAE504case3 Research Paper Example | Topics and Well Written Essays - 500 words. Retrieved from https://studentshare.org/education/1606114-mae504case3

CHECK THESE SAMPLES OF MAE504case3

Motivation of Employees in relation to managment in a organizational setting

Immigration and the Immigrant Policy Initiative in Britain and the EU

Eating in Sociological Perspective and Culture in Every Day Life

The Cardiovascular System: Blood Vessels and Circulation/ and cause of tingling or numb of a body part after a nap ect

The Interplay between Humans and Technology

1 Pages (250 words) Case Study
sponsored ads
Save Your Time for More Important Things
Let us write or edit the research paper on your topic "MAE504case3" with a personal 20% discount.
GRAB THE BEST PAPER

Let us find you another Research Paper on topic MAE504case3 for FREE!