Comments (0)
Add to wishlistDelete from wishlist
Cite this document
Summary
"Observation Journal: English Class " paper discusses one’s experience while observing an ESOL student, Mark conversing with Leo, another ESOL student. Mark is a Chinese national while Leo is an Indian national. One would like to observe the use of BICS or CALP in their conversation…
Download full paperFile format: .doc, available for editing
HIDE THIS PAPERGRAB THE BEST PAPER97.1% of users find it useful 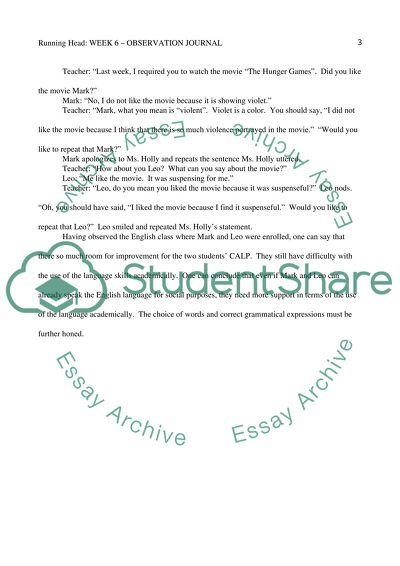 BICS stands for Basic Interpersonal Communication Skills which are the day-to-day language skills needed to interact socially with other people (Haynes, n.d.). On the other hand, CALP stands for Cognitive Academic Language Proficiency which “refers to formal academic learning” (Haynes, n.d.).

The first situation that was observed was the conversation they were having before English class starts. They were at the canteen to have breakfast.
Mark greets Leo, “Hi Leo! How you today?”
Leo responds by saying, “No good. No much sleep last night.”
Mark: “What’s matter Leo?”
Leo: “Have to do lot study for our class. I prepare for the hearing test.”
Mark: “I study also but little only.”
Leo: “No matter. Let’s eat breakfast. What you like?”
Mark: “Like bread with ham and hot tea.”
Leo: “Me no cold drink. Me like hotdog sandwich and the hottest coffee around to wake up me.”
Mark: “OK. Let’s eat faster cause soon class start. The teacher might mad if we come later.”

The conversation that one just described is a perfect example of BICS. The two ESOL students were speaking in English. Although there were many grammatical errors, they were able to understand each other. There were minimal pronunciation errors. They were quite familiar with the English vocabulary and they were able to express their thoughts well using the English language. Mark and Leo have already developed their basic interpersonal communication skills through one still notice a slight struggle in finding the right words.

The next incident one observed was the English class where Mark and Leo were both enrolled. The topic for the day was a movie review of “The Hunger Games”. The teacher asked the students their reaction to the movie.

...Observation Journal #3 EDES 5401 Alanoud Alrasheed 11/8/14 Childs Avery Age: Three years old Observers Alanoud Alrasheed Areas of development: Avery expresses social-emotional development, changes in temperament, self-esteem, shows intellectual development, communicates and plays. Anecdotic Note: For the third time, I went back to the childcare where I made another observation about Avery. When I entered the class Avery shouted my name, ‘Alanoud! ‘Yes Avery, I replied. ‘Weycome, he said. Another older child said, ‘He is saying welcome. I then replied, ‘Thank you. It seems; Avery was able to recognize me this time. The teachers were making the children sit in their respective spots...
2 Pages(500 words)Essay

It may have been argued that since people, in general, are greedy and as a natural instinct are ambitious- they may always want a bigger share of the scarce resources and try to...
9 Pages(2250 words)Term Paper

However, it may not necessarily enjoy the status of an official language. American English has evolved over centuries but it was after the American Revolution that distinct alterations were made to it to reflect national and political independence from the British. Noah Webster is regarded as the founding father of the American English who realized the need for standardization of the language and worth of linguistic identity (Language Translation Inc., 2006).
According to surveys, English is considered as the official language in fifty-one countries and in twenty-seven states of America. Statistics show that it is the mother language of 82% of the population in the United States of America and almost 96% can actually speak it...
6 Pages(1500 words)Essay

An Alternative Approach to an Epistemology of Observation

To a large part, these two categories of the means by which humans are able to engage the world around them and determine useful inference are largely true; however, there are a few notable exceptions to this. Rather than merely glossing over these exceptions and emphasizing upon the broad applicability of this particular determination of human thought and knowledge acquisition, it will be the express intent of this particular analysis to define the ways in which this statement is correct – as well as define the way in which this statement is incorrect and ultimately misses the mark of understanding the human experience and the means by which knowledge is obtained/achieved. Though such a careful deconstruction of the above s...
7 Pages(1750 words)Assignment
sponsored ads
Save Your Time for More Important Things
Let us write or edit the personal statement on your topic "Observation Journal: English Class" with a personal 20% discount.
GRAB THE BEST PAPER

Let us find you another Personal Statement on topic Observation Journal: English Class for FREE!