Why Do People Go to School - Essay Example

Comments (0)
Add to wishlistDelete from wishlist
Cite this document
Summary
This essay discusses that people go to school because they want a successful life. People have the perception that schools ensure a successful life. Most people believe that having a well-recognized qualification will get them a good job (the general idea of a good job is that pays well)…
Download full paperFile format: .doc, available for editing
HIDE THIS PAPERGRAB THE BEST PAPER97.5% of users find it useful 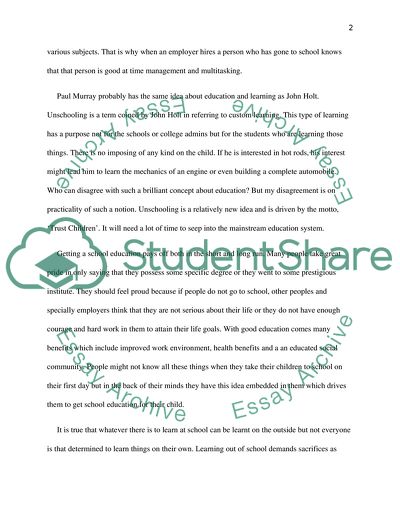 Extract of sample "Why Do People Go to School"

Download file to see previous pages That is exactly why people send their children to school. They want to see them succeed as lawyers, doctors, artists, engineers and all the jobs that pay well. But I don’t agree with Paul when he says that when children go to school wearing uniforms, they look like as if they are being drafted into something. To a certain point in the school career, children need to learn the basics, that is necessary. No one is pressing and molding children into robots by sending them to schools. There is a reason why there is a greater number of successful people who went to school than those who didn’t.
While at school, children don’t only delve into their books, there is a whole package of school education. For instance, the extra-curricular activities are not directly related with job hunting but, they are necessary for overall grooming and development of body and mind, which is something people get as a side dish when they get a school education. When a person goes to school, he meets new people, makes new friends, deals with them in dorms. School education teaches students how to meet deadlines on their assignments and juggle huge workloads of various subjects. That is why when an employer hires a person who has gone to school knows that that person is good at time management and multitasking.
Paul Murray probably has the same idea about education and learning as John Holt. Unschooling is a term coined by John Holt in referring to custom learning. This type of learning has a purpose not for the schools or college admins but for the students who are learning those things. There is no imposing of any kind on the child. If he is interested in hot rods, his interest might lead him to learn the mechanics of an engine or even building a complete automobile.  Considering a hypothetical situation, had Rex Walls had sent his children to regular schools, he would be had to get a decent regular job like everyone else and his children would not have to steal lunch from other schoolmates and root trash cans for food. But demonstrating Unschooling, what Rex and her wife taught their children about literature, art, music, history, astronomy, geology, and mathematics added so much useful knowledge to their children’s learning but character training was completely absent from. And that is why such an intelligent and knowledgeable family had to live their lives like nomads. I don’t disagree with Paul Murray and John Holt on the basic idea about education and it is a fact that deep down inside, no one wants to go to school as it is hard work. But I need more pragmatic solutions to their idea of not going to school or Unschooling. Loitering around, doing nothing, watching movies, playing in the parks and sleep when tired, sounds like a dream life but imagine if everyone starts doing this, then there would be no more technicians and engineers to run a TV station. There would be no journalists and writers to play interesting news on TV and publish interesting books and magazines. Like food and water, knowledge or education is the basic necessity of a successful life and school education is one safe way to achieve that. ...Download file to see next pagesRead More
Share:
Tags
Cite this document
(“Why Do People Go to School Essay Example | Topics and Well Written Essays - 1250 words”, n.d.)
Why Do People Go to School Essay Example | Topics and Well Written Essays - 1250 words. Retrieved from https://studentshare.org/education/1586930-see-instructions-please

CHECK THESE SAMPLES OF Why Do People Go to School

The first culture clash between the Aboriginals and the Europeans was over clothing4. The Europeans were used to covering themselves up completely5. As a result, the Europeans were shocked to see naked Aboriginals roaming around freely6. The Abori...
6 Pages(1500 words)Article
sponsored ads
Save Your Time for More Important Things
Let us write or edit the essay on your topic "Why Do People Go to School" with a personal 20% discount.
GRAB THE BEST PAPER

Let us find you another Essay on topic Why Do People Go to School for FREE!