The Supporting of Bilingualism Language in Education in U.S - Essay Example

Comments (0)
Add to wishlistDelete from wishlist
Cite this document
Summary
The author examines the policy of the supporting of Bilingualism language in Education in the U.S. which involves many programs. One of the programs is the simultaneous teaching students that speak English the Spanish language as well as teaching Spanish speaking students English language…
Download full paperFile format: .doc, available for editing
HIDE THIS PAPERGRAB THE BEST PAPER94.4% of users find it useful 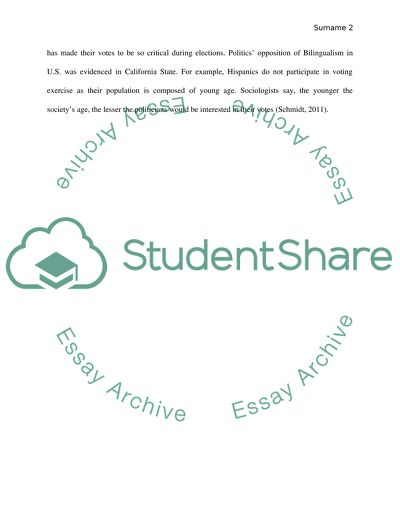 Extract of sample "The Supporting of Bilingualism Language in Education in U.S"

College: The investigation on the official Language of movement in U.S. indicates that the majority of Hispanics immigrated to United States in 1908 as well as in 1924. Given that they were one third of the immigrants in U.S. within that period of migration from their mother country, they had to struggle with the language as they could not comprehend it fully. (Ofelia and Baker, 2007, pg4).
A number of immigrants that managed to stay in United States did not carry on with their education because of dropping out of school. In 1973, the Supreme Court resolved that even the Hispanic students had the right of integrating with other white students. In late 1960’s, where the black students started having a stable mixture with white students, the Hispanic students were still being segregated from other races (Cisneros, 2009).
The supporting of Bilingualism language in Education in U.S. involves many programs. One of the programs is the simultaneous teaching students that speak English the Spanish language as well as teaching Spanish speaking students English language. Another means is to offer scholastic lessons that focus in the native language of students while simultaneously insisting on Spanish students to take English courses as a subsequent foreign language (Diaz 23).
Towards the late 1970’s, Hispanic students had gradually been isolated. In as much as 54.8% of Hispanic students had managed to go to white schools, only 71% had managed to attend Hispanic schools by late 1980’s. Such drastic increase of Latin in the U.S. within 10 years has made their votes to be so critical during elections. Politics’ opposition of Bilingualism in U.S. was evidenced in California State. For example, Hispanics do not participate in voting exercise as their population is composed of young age. Sociologists say, the younger the society’s age, the lesser the politicians would be interested in their votes (Schmidt, 2011).
Works Cited
García, Ofelia and Baker, Colin. Bilingual education. New York: Baker & Taylor, Inc.: 2007.
Pg 4. Print. Available at http://books.google.co.ke/books?id=PQoVx1dl-XwC&printsec=frontcover&dq=Bilingual+education&hl=sw&ei=7LS7TpfQN8-UOszkicQI&sa=X&oi=book_result&ct=result&resnum=2&ved=0CDAQ6AEwAQ#v=onepage&q&f=false.
Diaz, Soto. A post-monolingual education. International Journal of Educational Policy, Research
and Practice. 2006. Available at http://news-business.vlex.com/vid/post-monolingual-education-56840431
David, Cisneros, J. Latina/os and party politics in the California campaign against bilingual education: a case study in argument from transcendence. Argumentation and Advocacy. 45. 2009. Available at http://law-journals-books.vlex.com/vid/campaign-bilingual-argument-transcendence-75515269.
Tyler, Schmidt. Subjectivities-in-process:: writing race and the online discussion board. Radical Teacher. 2011. Available at http://news-business.vlex.com/vid/subjectivities-process-and-the-online-277536871. Read More
Share:
Tags
Cite this document
(“The Supporting of Bilingualism Language in Education in U.S Essay - 38”, n.d.)
The Supporting of Bilingualism Language in Education in U.S Essay - 38. Retrieved from https://studentshare.org/education/1583737-essay

“The Supporting of Bilingualism Language in Education in U.S Essay - 38”, n.d. https://studentshare.org/education/1583737-essay.
Comments (0)
Click to create a comment or rate a document

CHECK THESE SAMPLES OF The Supporting of Bilingualism Language in Education in U.S

However, it may not necessarily enjoy the status of an official language. American English has evolved over centuries but it was after the American Revolution that distinct alterations were made to it to reflect national and political independence from the British. Noah Webster is regarded as the founding father of the American English who realized the need for standardization of the language and worth of linguistic identity (Language Translation Inc., 2006).
According to surveys, English is considered as the official language in fifty-one countries and in twenty-seven states of America. Statistics show that it is the mother language of 82% of the population in the United States of America and almost 96% can actually speak it...
6 Pages(1500 words)Essay
sponsored ads
Save Your Time for More Important Things
Let us write or edit the essay on your topic "The Supporting of Bilingualism Language in Education in U.S" with a personal 20% discount.
GRAB THE BEST PAPER

Let us find you another Essay on topic The Supporting of Bilingualism Language in Education in U.S for FREE!