Comments (0)
Add to wishlistDelete from wishlist
Cite this document
Summary
The author of the essay “Why Do I Hope to Be a Successful Penn University's Student?” presents himself as a person who has got experience in the business trends, the stock exchange market, as a member of the Greenpeace movement, and believes he'll succeed in the study in the University…
Download full paperFile format: .doc, available for editing
HIDE THIS PAPERGRAB THE BEST PAPER94.9% of users find it useful 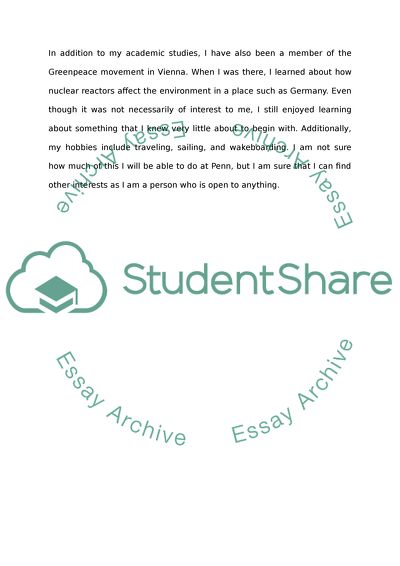 By nature, I am extremely well-versed in the world of business because of my family’s history in the industry. My parents both came from rich entrepreneurial families that encouraged the pursuit of business excellence. I will be able to bring all of my abilities that I have learned from my parents to Penn University and will be an asset to any department.
I have always had an interest in business due to my fascination with the opportunity to take a risk and either gain a lot or lose a lot. When I was a small child, I was able to learn first-hand from my father, who was involved in the construction business. The thing that I most learned from this experience was that businesses must always change and adapt in order to keep up with new technology and trends.
When I became a teenager, I was allowed to participate in the stock exchange market, although I did not have the luxury of unrestricted access. I enjoyed predicting which company would make the next move and become successful. My childhood and adolescent experiences in Austria and the UK have served me well and have allowed myself to open my eyes up to the world of possibilities that are out there.
When I attend Penn, I will enjoy having engrossing discussions with the other students and inputting into the life of the university. My outgoing nature allows me to express my views in a way that other people may consider rude, but I feel like I need my peers to understand me in order to fit in with the crowd.
In addition to my academic studies, I have also been a member of the Greenpeace movement in Vienna. When I was there, I learned about how nuclear reactors affect the environment in a place such as Germany. Even though it was not necessarily of interest to me, I still enjoyed learning about something that I knew very little about to begin with. Additionally, my hobbies include traveling, sailing, and wakeboarding. I am not sure how much of this I will be able to do at Penn, but I am sure that I can find other interests as I am a person who is open to anything. Read More
Share:
Tags
Cite this document
(“Why Do I Hope to Be a Successful Penn University's Student Admission/Application Essay”, n.d.)
Why Do I Hope to Be a Successful Penn University's Student Admission/Application Essay. Retrieved from https://studentshare.org/education/1581887-short-essay-personal-statement

“Why Do I Hope to Be a Successful Penn University'S Student Admission/Application Essay”, n.d. https://studentshare.org/education/1581887-short-essay-personal-statement.
Comments (0)
Click to create a comment or rate a document

Napoleon’s strategic styles and unique approach of governance have been used in different ways by rulers across the world not only to keep the civilians of their respective nations under their control but at the same time, his strategic approaches proved to be sources of great inspiration for all those leaders who wished to receive an upper hand over the existing governing systems of other nations. It has always been a matter of great surprise for diplomats, politicians and strategy makers across the world to date that how within such a short period of time and at such a small age he has been able to receive such a huge rate of success. The same note of surprise and respect has explicitly been reflected Georges Lefebvre&rsqu...
11 Pages(2750 words)Article

Even though there are no specific short cuts for success people seek success wherever they move about. Questions such as “what makes one successful?” and “how can one become successful in life?” have become commonplace. It is ambiguous whether it is one’s education, popularity, talent, goals, wealth or profession that makes him successful. In fact, Success does not have anything to do with one’s environment, circumstances, level of education, or even financial condition. Success is not limited to any specific fields or walks of life: one can find successful people in almost all walks of life whether it be the film industry, business field, politics or in the world of science and technology. No d...
7 Pages(1750 words)Essay

Smoking is associated to harm secondary smokers than real smokers and this is the reason many nations including America have implemented bans on smoking as a move to protect non-smokers from the associated harms from smokers and also reduce the prevalence of smoking (John, pg35). This has greatly contributed to controlling public smoking. The smoking prevalence decreased to 18.9% up from 24.4% in adults with the age of 18-24 from the year 2005 to the year 2011, in accordance with a research Centre (CDC). The age group is now among the ones with the lowest prevalence in smoking of age below 65. It was six years back; the group was highest in the smoking number. In America, apart from burning smoking in some public places, the moves...
6 Pages(1500 words)Case Study
sponsored ads
Save Your Time for More Important Things
Let us write or edit the admission/application essay on your topic "Why Do I Hope to Be a Successful Penn University's Student" with a personal 20% discount.
GRAB THE BEST PAPER

Let us find you another Admission/Application Essay on topic Why Do I Hope to Be a Successful Penn University's Student for FREE!