Comments (0)
Add to wishlistDelete from wishlist
Cite this document
Summary
In the paper “Cross-Cultural Sensitization” the author describes his career objective to establish himself as an entrepreneur so that he can fulfill his career goals and also discharge social responsibilities by being able to generate employment in his country…
Download full paperFile format: .doc, available for editing
HIDE THIS PAPERGRAB THE BEST PAPER96.3% of users find it useful 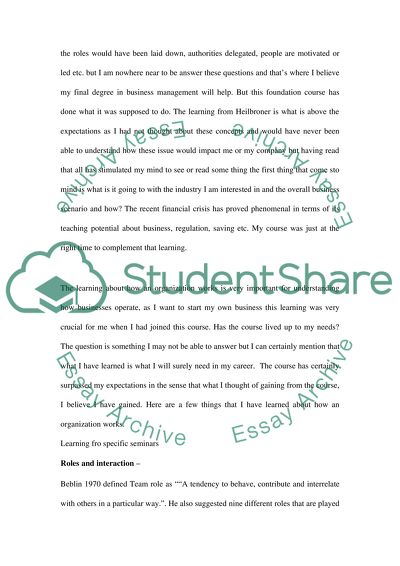 Download file to see previous pages My purpose for attending the course was specifically to prepare myself for the formal learning of business management. My expectations from the course included sufficient exposure to business management concepts, to develop an aptitude for the learning of business management and an environment which is both exciting and challenging. The foundation course has done what I had envisaged before taking admission. The subjects that I have studied in Term 1 and term 2 have stimulated my mind to think as a business manager now I understand how a piece of news which may not seem to have anything to do with business or economics can have its impact on the economic or business environment. Having read the book, “Understanding organizations” by HANDY C. has provided me sufficient exposure the concepts of business management like Motivation, role, power and influence, group dynamics, leadership, organizational structure etc has stimulated my mind to think in terms of organizational context. Before attending the course though I had seen lot of organizations like my school, my father’s company etc but my mind never thought on how salaries are to be decided and how do they structure the organization etc but this course has sensitized my mind to generate those questions, now looking at any organization I wonder how the roles would have been laid down, authorities delegated, people are motivated or led etc. but I am nowhere near to answer these questions and that’s where I believe my final degree in business management will help. But this foundation course has done what it was supposed to do.  ...Download file to see next pagesRead More
Share:
Tags
Cite this document
(“Cross Cultural Sensitization Personal Statement”, n.d.)
Cross Cultural Sensitization Personal Statement. Retrieved from https://studentshare.org/education/1565467-business-reflective-essay
(Cross Cultural Sensitization Personal Statement)
Cross Cultural Sensitization Personal Statement. https://studentshare.org/education/1565467-business-reflective-essay.
“Cross Cultural Sensitization Personal Statement”, n.d. https://studentshare.org/education/1565467-business-reflective-essay.
Comments (0)
Click to create a comment or rate a document

As a function of this, this book proved to be a pivotal and seminal work within the genre of cross-cultural understanding as, even though it was a novel, it helped to open the eyes of many in and around the country as to the unique set of situations that individuals experienced as a function of not only being bi-racial and living in a juxtaposition of two alternate societies but attempting to draw a sense of personal identity between the two and forging a third as a result. Furthermore, although not the express intent of the book, the issues of assimilation and the firm choice that the second generation immigrant must make between the culture of their parents and the unique aspects of the culture that they have been raised into.
sponsored ads
Save Your Time for More Important Things
Let us write or edit the personal statement on your topic "Cross Cultural Sensitization" with a personal 20% discount.
GRAB THE BEST PAPER

Let us find you another Personal Statement on topic Cross Cultural Sensitization for FREE!