Comments (0)
Add to wishlistDelete from wishlist
Cite this document
Summary
This paper proposes to provide insight into teaching the Turkish language by the use of Turkish novels. The Turkish culture is specially endowed with novels for the purpose of teaching and learning the Turkish language. Teaching a new language becomes especially gainful when there is good collection of books…
Download full paperFile format: .doc, available for editing
HIDE THIS PAPERGRAB THE BEST PAPER98.1% of users find it useful 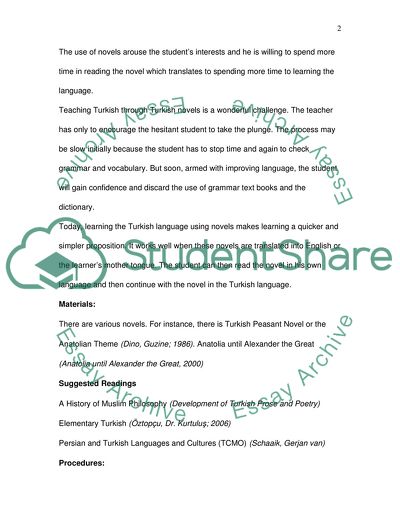 Teaching Turkish through Turkish Novels TEACHING TURKISH THROUGH TURKISH NOVELS GRACE SARKAR Order No. 417747 02 March TEACHING TURKISH THROUGH TURKISH NOVELS
Lesson Proposal
This paper proposes to provide insight into teaching the Turkish language by the use of Turkish novels.
Teaching Turkish through Turkish Novels
The Turkish culture is specially endowed with novels for the purpose of teaching and learning the Turkish language. Teaching a new language or learning one’s mother tongue becomes especially gainful when there is good collection of books that tell a story, narrate events, or simply convey daily situations in beautiful prose (Dino, Guzine; 1986).
The Turkish language is blessed with significant writers who took pains to write exquisite books portraying life around a plethora of backgrounds and events that had readers glued to the books they wrote. They are interesting and make the business of language learning so much simpler and easier (Dino, Guzine; 1986).
Introduction/Rationale
Turkey is the only Islamic nation in Europe. It is westernized and has better proportion of educated populace. Undoubtedly, it is personally as well as economically beneficial to learn the Turkish language.
Aims and Objectives of Using Novels in Turkish Language Learning
To aim and objective of this paper is to teach the Turkish language by the use of Turkish novels.
The use of novels arouse the student’s interests and he is willing to spend more time in reading the novel which translates to spending more time to learning the language.
Teaching Turkish through Turkish novels is a wonderful challenge. The teacher has only to encourage the hesitant student to take the plunge. The process may be slow initially because the student has to stop time and again to check grammar and vocabulary. But soon, armed with improving language, the student will gain confidence and discard the use of grammar text books and the dictionary.
Today, learning the Turkish language using novels makes learning a quicker and simpler proposition. It works well when these novels are translated into English or the learner’s mother tongue. The student can then read the novel in his own language and then continue with the novel in the Turkish language.
Materials:
There are various novels. For instance, there is Turkish Peasant Novel or the Anatolian Theme (Dino, Guzine; 1986). Anatolia until Alexander the Great
(Anatolia until Alexander the Great, 2000)
Suggested Readings
A History of Muslim Philosophy (Development of Turkish Prose and Poetry)
Elementary Turkish (Öztopçu, Dr. Kurtuluş; 2006)
Persian and Turkish Languages and Cultures (TCMO) (Schaaik, Gerjan van)
Procedures:
The course may be done in 3 or 4 months, beginning with the basics of the Turkish language, under a teacher of the Turkish language. Intense study for 1to 2 hours daily will be required to be made.
Evaluation:
This depends on the capacity of the student to learn, and a written test at the end of the course. Some basic expressions can be learnt fairly quickly. Simple expressions such as: Ne yapıyorsun? (What are you doing?), Evli misiniz? (Are you married?), or Selam Özge, nereden geliyorsun? (Hi Ozge, where are you from?) are capable of being learnt fast. However, grammar and vocabulary takes time. But novel reading helps in learning grammar and vocabulary faster (Öztopçu, Dr. Kurtuluş; 2006).
Sources:
Anatolia until Alexander the Great, 02 February 2000, http://www.turkishodyssey.com/turkey/history/history1.htm
Department of Turkish Language Education, http://egitim.baskent.edu.tr/english/tlep.pdf
Development of Turkish Prose and Poetry, Turkish Literature, A History of Muslim Philosophy, http://www.muslimphilosophy.com/hmp/LIV-Fifty-four.pdf
Dino, Guzine; The Turkish Peasant Novel, or the Anatolian Theme, 1986, http://www.jstor.org/pss/40141696
Esen, Nuket; The Turkish Novel, http://www.lingfil.uu.se/afro/turkiskasprak/IP2007/Nuket2007.pdf
Mevlana, Celebi, http://www.exploreturkey.com/exptur.phtml?id=239
Öztopçu, Dr. Kurtuluş; Elementary Turkish, 2006, http://www.elementaryturkish.com/content/
Schaaik, Gerjan van; Department of Arabic, Persian and Turkish Languages and Cultures (TCMO), Information Technology & Teaching Turkish, http://www.lingfil.uu.se/info/GerjanvanSchaaik.pdf
The Turkish Library, June 2005, http://www.unionsverlag.com/pdf/turkish-library.pdf
Turkish minorities on Greek Aegean islands deprived of their rights, Sunday’s Zaman, 28 February 2010, http://www.sundayszaman.com/sunday/detaylar.do?load=detay&link=149837
Turkone, Mumtazer; The Turkish education system and the official ideology, 18 July 2009, http://www.todayszaman.com/tz-web/columnists-181252-the-turkish-education-system-and-the-official-ideology.html Read More
Share:
Tags
Cite this document
(“Teaching Turkish through Turkish novels Essay Example | Topics and Well Written Essays - 500 words”, n.d.)
Teaching Turkish through Turkish novels Essay Example | Topics and Well Written Essays - 500 words. Retrieved from https://studentshare.org/education/1563393-teaching-turkish-through-turkish-novels

CHECK THESE SAMPLES OF Teaching Turkish through Turkish novels

What Is Multigrade Teaching

Although multigrade teaching is most associated with developing countries, the use of this type of system is not limited to Africa and the Caribbean. “Multigrade classes, in which teachers work with more than one curriculum grade at the same time, are widespread in developing countries. They are also surprisingly common in industrialized countries. Yet the needs of learners and teachers in multigrade classes remain invisible to those who plan, design and fund education centrally” (O’Toole, 2006). There are several reasons why districts may choose to utilize the multigrade system, sometimes out of necessity and sometimes as a deliberate choice, just as there are several ways in which the system can be organized. I...
7 Pages(1750 words)Essay

To evaluate this course it is a good idea to start from the beginning and look at the objectives. As I was looking for references in this process, I found a website that had tips for designing instruction that I felt would offer me a structure to work within. According to "Instructional Design," the instruct...

9 Pages(2250 words)Book Report/Review
sponsored ads
Save Your Time for More Important Things
Let us write or edit the essay on your topic "Teaching Turkish through Turkish novels" with a personal 20% discount.
GRAB THE BEST PAPER

Let us find you another Essay on topic Teaching Turkish through Turkish novels for FREE!