Why I want to Study at Pepperdine - Admission/Application Essay Example

Comments (0)
Add to wishlistDelete from wishlist
Cite this document
Summary
The paper contains an application essay from a young Mexican Catholic female who wants to pursue her higher education degree at Pepperdine. The author states that Pepperdine equips its scholarly community with a liberal arts degree anchored on Christian values.    …
Download full paperFile format: .doc, available for editing
HIDE THIS PAPERGRAB THE BEST PAPER93% of users find it useful 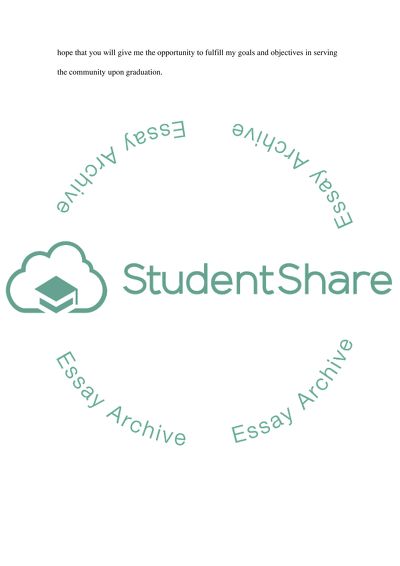 Extract of sample "Why I want to Study at Pepperdine"

I am a young Mexican catholic female who is on the verge of graduating from high school and I want to pursue my higher education degree at Pepperdine. What interests me the most of Pepperdine is the fact that its scholarly community equips its students with a liberal arts degree anchored on Christian values.
Your commitment to integrate faith and learning challenges to ultimately call for a life of service is appealing to me because I have always thought that what is obtained should be shared with the community. Give unto others as it has been given to you.
The impact that the service-learning may have on me in renewing my mind, spirit, and community are insurmountable. I already have a grounded foundation and Pepperdine will help me flourish in this area.
I have strong values with strong ethics and morale. I also have a strong mind that will lead me to overcome any academic task that will be assigned to me. My spirit longs for spiritual guidance to help me help others on their path to spirituality. My desires to help the community are strong. The community is the essence of sharing, combining efforts to go forth for its improvement.
I also want to have the opportunity of working with your faculty in their research venues. I want to learn and help them with their research from primary sources in Spanish since I am able to take into consideration the culture, traditions, history, language, customs, and idiomatic terms while performing research. It will not only be a translation.
I hope that Pepperdine gives me the opportunity to become part of its higher education institution so that I may continue to grow in these aforementioned areas. I hope that you will give me the opportunity to fulfill my goals and objectives in serving the community upon graduation. Read More
Share:
Tags
Cite this document
(“Why I want to Study at Pepperdine Admission/Application Essay”, n.d.)
Why I want to Study at Pepperdine Admission/Application Essay. Retrieved from https://studentshare.org/education/1560806-college-essay

“Why I Want to Study at Pepperdine Admission/Application Essay”, n.d. https://studentshare.org/education/1560806-college-essay.
Comments (0)
Click to create a comment or rate a document

CHECK THESE SAMPLES OF Why I want to Study at Pepperdine

The social policy varies differently by the needs of individual nations and can include assistance to youth unemployment in an attempt to provide temporary aid until an individual is able to sustain a regular income through work incentives. One of the main theories regarding welfare to work programs is that working parents contribute to the economy and are less likely to rely solely on the state for their welfare (Walling, 2005). With this concept being one of the primary motivators for welfare to work policies, different nations adopt a policy to provide an allotment of skills training, aid with transportation issues, financial support, and even child care as an incentive to drive the welfare recipient back into full-time work. T...
9 Pages(2250 words)Report

The authors, however, have made several philosophical assumptions even before the actual study began. These assumptions have bearing on the entire research because they guided the studies thesis, the method of investigation and the way the researchers interpreted the collected data.
Referring to previous works, Schommer-Aikins and Hutter embarked on several bouts of theorizing regarding the nature of knowledge and how people learn about issues that they face every day. Citing the body of literature, for example, on epistemological beliefs, the authors assumed that "individuals’ beliefs about the nature of knowledge and learning are linked to their comprehension, metal comprehension, interpretation of information, and pe...
6 Pages(1500 words)Case Study
sponsored ads
Save Your Time for More Important Things
Let us write or edit the admission/application essay on your topic "Why I want to Study at Pepperdine" with a personal 20% discount.
GRAB THE BEST PAPER

Let us find you another Admission/Application Essay on topic Why I want to Study at Pepperdine for FREE!