Comments (0)
Add to wishlistDelete from wishlist
Cite this document
Summary
The paper contains the essay in which the author states that an important pathway of his life is to achieve academic and professional success. To achieve success the author first has to analyze all the aspects of his life including the strengths, weaknesses, problems, and opportunities.   …
Download full paperFile format: .doc, available for editing
HIDE THIS PAPERGRAB THE BEST PAPER92.5% of users find it useful 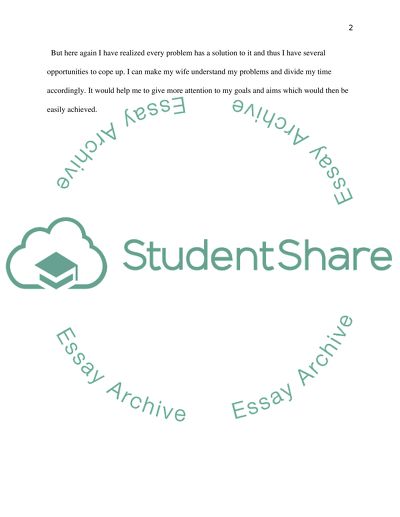 As I have moved ahead in life I have realized that with the determination of my kind I can be able to achieve anything. This determination has made strong in life and helped me in taking decisions which I have not regretted. Choosing the path of success in my professional life has become an aim for me because of this very strong determination and I think if I utilize it in the correct manner I’ll be able to achieve what I aim to.
But as said by Christopher Moore "Nobodys perfect. Well, there was this one guy, but we killed him....". It clearly depicts that I personally have my own weaknesses in achieving my goals. All over these years, I have realized that learning something is not easy for me. It takes time for me to learn things which others learn in a while. But this weakness can easily be overcome if I give all of my attention to my goals. This attention helps me to not only learn and understand things but also to excel in these things.  Read More
Share:
Tags
Cite this document
(Creating Academic and Professional Success Admission/Application Essay - 3, n.d.)
Creating Academic and Professional Success Admission/Application Essay - 3. Retrieved from https://studentshare.org/education/1559801-creating-academic-and-professional-success

CHECK THESE SAMPLES OF Creating Academic and Professional Success

1. I want to be an active part of people's, management, professionals, and workers, dreams
2. To better get to know what my chosen job entails I will do my research and make interviews of those in active practice.
3. I have the enthusiasm and interest in the profession but this is not enough. I need to lay the foundations of learning and knowledge from the best school and the best professors.
II. The Profession: It s Marketability and Requirements
A. The Marketability pertains to the professions need requirements and other channels of work in the future.
1. Industry trends
(1) As long as there are businesses there will always be a constant need for Business Administration Managers
(2) The anecdo...
1 Pages(250 words)Assignment

... Team Structure: Advantages and Challenges Todays business world has embraced the concept of the team to structure an organization. A team is characterized by a group of members who are committed to a shared purpose and operate within a common set of rules and norms. Individuals will act within the rules to promote the shared purpose. If the teams purpose is to sell widgets, everything is done to further the goal of increasing sales. Members may have specialized roles, but the mission of the team is the overriding priority. While the concept of team structure has some distinct advantages, it also presents a new set of challenges. A team is a collection of individuals that have unique talents and expertise. As a team they are able... Team...
2 Pages(500 words)Essay

... September 7, Academic Success Different studies on effective study habits, time management, and tapping appropriate support systems have been divulged to contribute to academic success. One affirms that success is first and foremost a matter of personal conviction and commitment to well-defined personal and educational goals. To be successful in college and in different facets of life, one must muster the ability to assume personal responsibility. Personal responsibility is aptly defined as “the ability of a person to maturely respond to the various challenges and circumstances of life” (Wilson par. 1). To be successful, extreme effort needs to be applied to reach one’s goals. Purpose, responsibility, hard work all lead to success...
2 Pages(500 words)Essay

The chemically-impaired nurse is a nurse who has a substance-addiction problem. These substances include drugs and/or alcohol. These nurses usually have impaired functions because of their addiction to drugs or alcohol and their nursing practice is often compromised as a result of their addiction (Ellis & Hartley, 2004). A study conducted by Sullivan and colleagues in the 1980s revealed that substance addiction problems are about as great as the percentage for substance addiction in the general population (as cit...
7 Pages(1750 words)Coursework
sponsored ads
Save Your Time for More Important Things
Let us write or edit the admission/application essay on your topic "Creating Academic and Professional Success" with a personal 20% discount.
GRAB THE BEST PAPER

Let us find you another Admission/Application Essay on topic Creating Academic and Professional Success for FREE!