Comments (0)
Add to wishlistDelete from wishlist
Cite this document
Summary
In the essay “Language and Educational System of Brazil,” the author discusses the official language in Brazil spoken by almost 184 million people. European settlers from Portugal introduce this language. In fact, Brazil is the only Latin American nation who speaks Portuguese…
Download full paperFile format: .doc, available for editing
HIDE THIS PAPERGRAB THE BEST PAPER94.7% of users find it useful 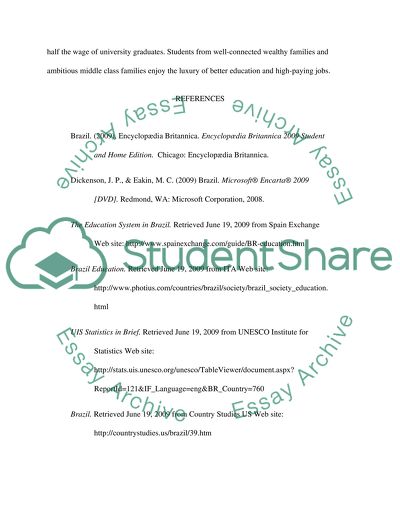 Extract of sample "Language and Educational System of Brazil"

CHECK THESE SAMPLES OF Language and Educational System of Brazil

Any child that sets foot into the classroom carries with him/her a myriad of experiences and backgrounds; thus, making it essential to perceive the child in relation to the systems and dynamics that surround him/her. “All areas of development depend on the context of children’s lives—children’s experiences in families, schools, neighborhoods, community organizations, cultural and et...
7 Pages(1750 words)Case Study

Each of the members shall, thus, introduce themselves in terms of their educational background and personal experiences for familiarity purposes. Let us begin with Mr. Colbert.
Colbert: I work at Quad Enterprises in the HRM department as the chief manager. I am overly concerned with the current juvenile justice system, bearing in mind that numerous people have debated upon it since time immemorial. I take a categorical interest in this issue since I have been a victim of juvenile violence. My opinion regarding the current trends in this law field is nobly affirmative. The current juvenile system is perfect. Thank you.
Amanda: I currently am a Law lecturer at a University. I am extremely interested in this issue too. My e...
7 Pages(1750 words)Essay

However, it may not necessarily enjoy the status of an official language. American English has evolved over centuries but it was after the American Revolution that distinct alterations were made to it to reflect national and political independence from the British. Noah Webster is regarded as the founding father of the American English who realized the need for standardization of the language and worth of linguistic identity (Language Translation Inc., 2006).
According to surveys, English is considered as the official language in fifty-one countries and in twenty-seven states of America. Statistics show that it is the mother language of 82% of the population in the United States of America and almost 96% can actually speak it...
6 Pages(1500 words)Essay
sponsored ads
Save Your Time for More Important Things
Let us write or edit the essay on your topic "Language and Educational System of Brazil" with a personal 20% discount.
GRAB THE BEST PAPER

Let us find you another Essay on topic Language and Educational System of Brazil for FREE!