Comments (0)
Add to wishlistDelete from wishlist
Cite this document
Summary
In the paper “My Personal Communication Goals” the author describes how he wants to become more confident and more open with his feelings to his parents and to his friends. There are many times that he feels quite frustrated but he cannot find the words to express his thoughts…
Download full paperFile format: .doc, available for editing
HIDE THIS PAPERGRAB THE BEST PAPER94.1% of users find it useful 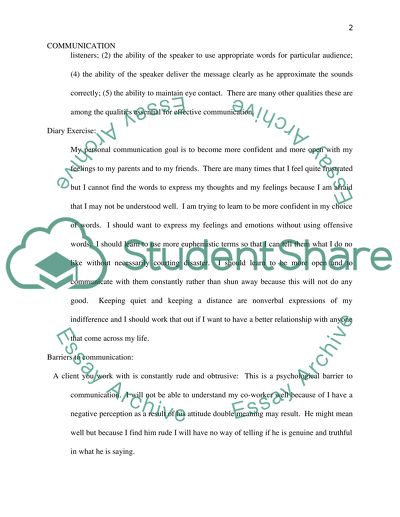 Download file to see previous pages I should learn to be more open and to communicate with them constantly rather than shun away because this will not do any good. Keeping quiet and keeping a distance are nonverbal expressions of my indifference and I should work that out if I want to have a better relationship with anyone that comes across my life.
Barriers to communication:
A client you work with is constantly rude and obtrusive: This is a psychological barrier to communication. I will not be able to understand my co-worker well because I have a negative perception as a result of his attitude double meaning may result. He might mean well but because I find him rude I will have no way of telling if he is genuine and truthful in what he is saying.
The clinic I practice becomes humid during the day. When the window is opened the sound of traffic disturbs the consultation: This is an example of a mechanical barrier. The noise and humidity are obstructions to effective communication. It is difficult to be understood well because of the noise and the patient may not be comfortable because of the humid temperature. This makes the patients not very ready to listen to what I say.
A client stands very close to you when they are speaking: This is an example of an organic barrier. I may be disturbed with the loudness of the voice of the client or uncomfortable with his smell or nearness and that blocks my attention to what he is saying.
You are a practitioner that has a speech impediment and wears contact lenses: There is an organic barrier here. I may not be able to produce the correct sound of the words and I might not see my listeners well so they may misunderstand what I am saying.
A client becomes very angry during a session. They leave the session early. At the next session, they apologize and offer you a cup of coffee: Another example of a psychological barrier. I might think that they are not sincere. They have let their emotions prevail. There will be a double meaning to their offer of coffee. I may think that they were embarrassed for their actions and now they are trying to cover up. I will question their motives. ...Download file to see next pagesRead More
Share:
Tags
Cite this document
(My Personal Communication Goals Assignment Example | Topics and Well Written Essays - 1500 words, n.d.)
My Personal Communication Goals Assignment Example | Topics and Well Written Essays - 1500 words. Retrieved from https://studentshare.org/education/1518252-communication-college-assignment

CHECK THESE SAMPLES OF My Personal Communication Goals

... way of thinking to a great extent. Steve Jobs is not exactly what most people would call a writer. In fact, most people would see him as a computer guy who made some revolutionary innovations in his field. However, for me, Steve Jobs is more than just an iconic figure in the computer world. I see me him as an inspiration. His message to the class of 2005 in Stanford University inspired me to stay focused and reach for my goals. In his message, he said that “Sometimes life hits you in the head with a brick. Dont lose faith. Im convinced that the only thing that kept me going was that I loved what I did…” Mr. Jobs’ message resonates well with me. I strongly believe that every person has great potentials to do something and when...
8 Pages(2000 words)Essay

The battle has received much criticism because of two important issues—the genocidal nature of the attack and the major lapse of judgment by their commander: the abandonment of Major Elliott. It is, however, the death of Major Elliott and his troops at the Battle of Washita which became the most controversial, at least within the regiment itself. It caused deep...
15 Pages(3750 words)Coursework
sponsored ads
Save Your Time for More Important Things
Let us write or edit the assignment on your topic "My Personal Communication Goals" with a personal 20% discount.
GRAB THE BEST PAPER

Let us find you another Assignment on topic My Personal Communication Goals for FREE!