The Achievement of Success in an Individuals Life - Personal Statement Example

Comments (0)
Add to wishlistDelete from wishlist
Cite this document
Summary
In the paper “The Achievement of Success in an Individual’s Life” the author describes a difficult phase in his life, which came after his enrollment in a new English University. He was not very well versed with English as he is not a native speaker of English…
Download full paperFile format: .doc, available for editing
HIDE THIS PAPERGRAB THE BEST PAPER93.4% of users find it useful 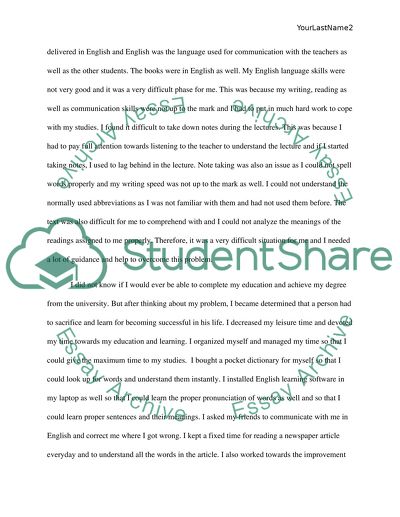 Extract of sample "The Achievement of Success in an Individuals Life"

Download file to see previous pages I chose the difficult path because I understood that education and knowledge serve to be important in the life of a person. I put in all my strength to cope up with the educational requirements of the university and I was assisted by my faculty members, who understood my problem and were highly supportive. English is not my first language and I did not hold much expertise in the language. I got enrolled in an English University where English was the medium of education. The lectures were delivered in English and English was the language used for communication with the teachers as well as the other students. The books were in English as well. My English language skills were not very good and it was a very difficult phase for me. This was because my writing, reading as well as communication skills were not up to the mark and I had to put in much hard work to cope with my studies. I found it difficult to take down notes during the lectures. This was because I had to pay full attention towards listening to the teacher to understand the lecture and if I started taking notes, I used to lag behind in the lecture. Note taking was also an issue as I could not spell words properly and my writing speed was not up to the mark as well. I could not understand the normally used abbreviations as I was not familiar with them and had not used them before. The text was also difficult for me to comprehend with and I could not analyze the meanings of the readings assigned to me properly. Therefore, it was a very difficult situation for me and I needed a lot of guidance and help to overcome this problem. I did not know if I would ever be able to complete my education and achieve my degree from the university. But after thinking about my problem, I became determined that a person had to sacrifice and learn for becoming successful in his life. I decreased my leisure time and devoted my time to my education and learning. I organized myself and managed my time so that I could give the maximum time to my studies. I bought a pocket dictionary for myself so that I could look up for words and understand them instantly. I installed English learning software in my laptop as well so that I could learn the proper pronunciation of words as well and so that I could learn proper sentences and their meanings. I asked my friends to communicate with me in English and correct me where I got wrong. I kept a fixed time for reading a newspaper article every day and to understand all the words in the article. I also worked towards the improvement of my writing skills by copying newspaper articles every day for up to one hour. I implemented these strategies as a part of my schedule and I made sure that I did not skip any of these activities. These were my personal steps to achieve success in my education. Teachers serve to be as true guides in the life of a person. This was proved by the assistance that was provided to me by my teachers to overcome my problem.  ...Download file to see next pagesRead More
Share:
Tags
Cite this document
(“The Achievement of Success in an Individuals Life Personal Statement - 5”, n.d.)
The Achievement of Success in an Individuals Life Personal Statement - 5. Retrieved from https://studentshare.org/education/1434364-reflective-essay
(The Achievement of Success in an Individuals Life Personal Statement - 5)
The Achievement of Success in an Individuals Life Personal Statement - 5. https://studentshare.org/education/1434364-reflective-essay.
“The Achievement of Success in an Individuals Life Personal Statement - 5”, n.d. https://studentshare.org/education/1434364-reflective-essay.
Comments (0)
Click to create a comment or rate a document

Community life has its advantages but also has its limitations to the members and the outsiders.
“The good things we secure for ourselves are uncertain and precious until it is secured for everyone and incorporated into our common life.”-Jane Addams. With society moving faster and more detached to technology, busy schedules, and job changes, it becomes harder and harder to feel a sense of community. This can result in a life of solitude and a lose a sense of belonging. Community life helps extract people out of this solitude life and introduce better, challenging and fun tasks such as participation in acts of kindness. It also provides room for volunteering, meeting neighbors, discussing important issues with othe...
7 Pages(1750 words)Case Study
sponsored ads
Save Your Time for More Important Things
Let us write or edit the personal statement on your topic "The Achievement of Success in an Individuals Life" with a personal 20% discount.
GRAB THE BEST PAPER

Let us find you another Personal Statement on topic The Achievement of Success in an Individuals Life for FREE!